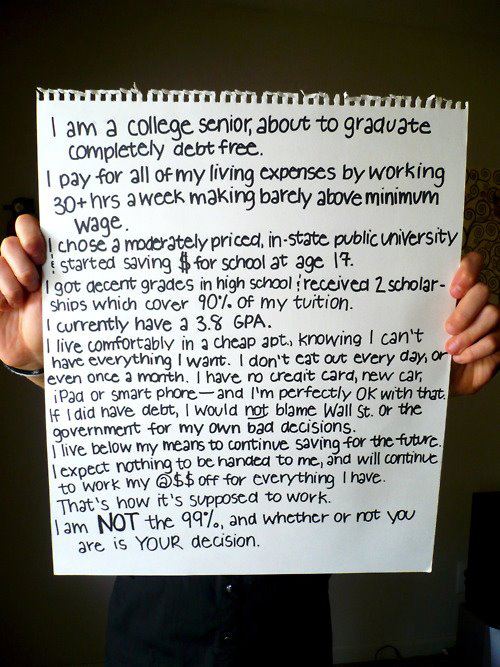 Apparently there have been a number of photos circulating the Internet in which people hold posters that say why they are or aren’t part of “the 99%” represented by the Occupy Wall Street movement. I just discovered this phenomenon last night. The pro-99% posters typically sound something like this: “I’m a single mom with five kids who works 80 hours a week and pays $20,000 a year for childcare. I am the 99%.” The anti-99% posters typically sound like: “I worked five jobs to pay my way through college and now I’m going to graduate debt-free. I would not blame the government or Wall Street for my own bad decisions (if I had made any). I am NOT the 99%.”

I would say that each type of poster expresses in a different way being part of the 99% of human beings who don’t get God’s grace, at least not how it’s described in Ephesians 2:8-9: “For it is by grace you have been saved, through faith—and this is not from yourselves, it is the gift of God— not by works, so that no one can boast.” The 1% of people who understand God’s grace to be the foundation of their being live in the incredible freedom of not needing to justify themselves before others and twist the stories of their lives into arguments for why they deserve to be taken seriously.

There are two primary forms of self-justification at play in the debate between the pro-and-anti-99% posters. One side justifies themselves by talking about how hard they work (which means that other people who aren’t as hard-working should stop whining). The other side justifies themselves by talking about how hard life has been for them or others with whom they sympathize (which means that people who lack sympathy should recognize their moral inferiority). Both forms of self-justification cause us to be presumptuous, judgmental people who either call all rich people greedy or all poor people lazy, when in fact there are many generous rich people and many hard-working poor people, and there are even people who choose to live in poverty because they want to grow closer to God as well as people who make lots of money in order to do lots of good with it in the world. Self-justification is the basis for most hatred in our society, particularly between those who see themselves as “responsible” and those who see themselves as “oppressed” or “sympathetic” to the oppressed.

Jesus died on the cross to save us from self-justification, because it keeps us eternally separated from God. As long as we see our lives as supporting arguments for why we deserve respect, salvation, wealth, etc, we are going to be incapable of receiving the grace that God only gives us as a gift and never as a reward. In fact, God has given us all the character traits about ourselves that we use to justify ourselves — our work ethic, our organizational skills, our humility, our courage, our compassion, our integrity. They are His gifts that we scorn when we make them into the basis for our self-worth. To make a poster like the ones that have been circulating the Internet is a slap in the face to God. Paul’s words in 1 Corinthians 4:7 need to be tattooed to the inside of our corneas: What do you have that you did not receive? And if you did receive it, why do you boast as though you did not?

So stop trying to prove how “responsible” you are or how “sympathetic” you are in order to have the self-satisfaction of judging others. Instead, be grateful for all that God has given you and use it as responsibly as you can, so that you can be extravagantly generous in how you share it with other people. Then you will be part of the 1% who actually experience the joy of living under God’s grace, which is a joy I hope to experience one day when I’m finally free of my poisonous self-justification.

October 23, 2011
The God who throws seeds everywhere
Next Post

October 26, 2011 When did banter become a spiritual gift? Jon Acuff and Christian radio DJ's
Recent Comments
0 | Leave a Comment
"Fantastic blog and devotional. Thanks for sharing."
mike looker Paraklesis: a beautiful word (2 Corinthians ..."
"In any event it is God who wins people, not you. You are not the ..."
Iain Lovejoy My Best Teachers Are People I ..."
"agreed."
Brandon Roberts Celebrity-Driven Church Is Not Safe For ..."
"OK Morgan. Wow. "Grand inquisiting?" "Owe it?" It's your blog post to resource academically. You ..."
Randy Starkey “All People Are Holy”: The Theology ..."
Browse Our Archives
get the latest from
Mercy Not Sacrifice
Sign up for our newsletter
POPULAR AT PATHEOS Progressive Christian
1