Do We Need Cops?

I need to confess something that will make me look unwoke. I was a bit spooked when I heard the Minneapolis city council is exploring dismantling their police department. I’m a radical who often shares radical ideas on my blog. Part of why it feels safe to do that is having a sense that nobody will actually take me up on my radical ideas which would suddenly feel half-baked and naive if they turned into actual policy proposals. So I’ve been wrestling with the implications of cities actually accepting activist demands to defund the police. Is that too radical or has our imagination been too small?

Since I think theologically first and foremost, I need to start with the theology underneath modern policing and really the assumptions within the architecture of the modern Western state in general. Thomas Hobbes’ 17th century Leviathan provides a core foundation for Western thinking about what societies need to provide in order to keep humanity stable. Hobbes’ assumption is that without a firm, authoritarian apparatus regulating human behavior, humanity would descend into a “war of all against all.”

The core Christian doctrine that guides Hobbes’ assumptions and Western thinking about civilization is our doctrine of sin: the assumption that human nature is totally depraved when left to its own devices. We add to this assumption about human nature the mandate supposedly given to white men by Jesus’ Great Commission to go into all the world and convert all the ignorant, scantily dressed brown people to our way of life. The history of the past five centuries has been a story of white men using our doctrine of total depravity and the mandate of Jesus’ Great Commission to justify our conquest of the entire world.

White Christianity’s doctrine of total depravity has historically revealed itself to be the total depravity of everyone else. We may wring our hands about our personal sin, but ultimately we have given ourselves the authority of life and death over other races of people whom we presume would descend into a pandemonium of drug-dealing, looting, and drive-by shootings without the constant intervention of white men with badges and guns to stop them.

What if it turns out that humanity’s total depravity is exacerbated and amplified within those who are empowered to represent dehumanizing authoritarian institutions? That’s the lesson of the monstrosity of police brutality. It’s not that police are necessarily worse people than the rest of us (though some may have psychological issues that give them a dangerous lust for absolute physical power). Mostly they are just pawns acting out the brutality of their job expectations and training as part of a dehumanizing, impersonal justice system that is that way by design.

Another outgrowth of the Western world’s appropriation of total depravity is the assumption that personal bias cannot be trusted so legal institutions must operate with blindfolds and impersonal scales. That’s literally the emblem of lady justice that we put on courthouses throughout the country. A justice seeking to be blind creates an institution that is cold and dehumanizing.

In our quest for the ever elusive “objectivity,”we have created institutions that are deliberately cold and impersonal: cops who aren’t from the neighborhood, judges whose hands are tied by mandatory sentencing guidelines, jurors randomly selected from the general population and weeded out if they have any personal interest. In criminal justice, the victim of crime is mostly erased and any semblance of healing or restoration for the victim is entirely an afterthought. Trials are described as “The People vs. The Defendant.”

What if we tried something different than our supposedly “objective” criminal justice system that has ripped so many families apart, destroyed so many lives, and left victims without any restoration or healing? What if each of our neighborhoods selected a council of grandmothers to resolve neighborhood conflicts and they were given the authority to mandate restorative justice in all cases?

This is the way justice and public safety has been handled in many indigenous tribes throughout the world for millennia. The degree to which that idea is comical to you is the degree to which you are engulfed in a white supremacist presumption for how the world has to look, just because the unquestionable paragons of the European Enlightenment like Hobbes, Locke, Smith, Hume, and Montesquieu said so. You may not have read any of those figures, but they’re the flawed, imperfect humans underneath the concrete bedrock of assumptions that modernity calls Just The Way Things Are.

So as I think about it more, I’m less freaked out about the Minneapolis city council’s proposal. I’m excited to see what creative alternatives that city can come up with. And I’m hopeful that the pressure their decision will create on other municipalities will inspire a lot of creative ideas around the country for how to develop personal, compassionate, trust-building, neighborhood-based approaches to public safety. We can do better than the monstrosity that is being exposed in our midst right now. 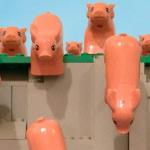