What I taught the confirmands: the sea of wrath and island of mercy

What I taught the confirmands: the sea of wrath and island of mercy April 24, 2012 Morgan Guyton

For the past two years at our church’s confirmation retreat, I’ve shared a message based on Ephesians 4:14-16 that summarizes the way that I understand Christ to save us from sin by incorporating us into His body. I have often described my dissatisfaction with the popular evangelical account of salvation in which sin is understood solely as an offense against God’s honor which is “paid back” by Jesus’ blood on the cross. The problem with this predominant account is that it allows little recognition of the cross’s role in addressing the spiritual imprisonment sin creates as a powerful social force. In any case, the way I explained to our church’s confirmands the problem that Jesus’ cross resolves was by using the metaphor of a sea of wrath that we can only escape through an island of mercy created by Christ.

The Sea of Wrath
Then we will no longer be infants, tossed back and forth by the waves, and blown here and there by every wind of teaching and by the cunning and craftiness of people in their deceitful scheming.
Eph 4:14 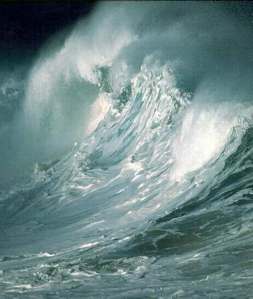 The most unfair thing about human existence is that we are born with a past that we did not choose. Despite the attempts of Enlightenment philosophy to proclaim human beings autonomous, rational free agents who start life with a clean slate, that simply does not describe our state of affairs. We are born into a world that is filled with a legacy of sin. Sin is more than just “making a mistake” or “not following the rules.” It describes a powerfully destructive social order that accumulates strength every time injustice occurs.

People hurt other people, the people who are hurt take out their pain on others, and those who are engaged in the hurting make excuses to justify their actions and react violently when confronted with the pain that they have caused. This happens on multiple levels simultaneously, whether it’s a society struggling with racism, a family ripped apart by alcoholism, or a locker room of adolescent boys who prove their manhood by torturing the boys who aren’t manly enough (and then perhaps defend their bullying as an expression of “religious freedom”). These ubiquitous cycles of pain create a “sea of wrath” where powerful waves of sin toss people back and forth into each other.

We are born into these waves of sin which precede our existence. We didn’t start the fire, as Billy Joel sang in the nineties, but that doesn’t mean that we haven’t lost our innocence. As we get tossed around in the waves of our wrathful world, blown here and there by all the agendas and opinions of people who want to sell us stuff, get our votes, or manipulate us for other reasons, we are shaped and molded in a way that we didn’t ask to be long before we are aware enough to try to resist it.

Though we want to believe that we can step out of the waves and find a stable vantage point from which to weigh all the perspectives that seek to influence us and make a calm, collected decision on which teachings we will follow, we are always already compromised. We cannot derive the foundation for our own integrity in ourselves; it needs to be laid underneath us by a power greater than us.

Finding the Island of Mercy
Instead, speaking the truth in love, we will grow to become in every respect the mature body of him who is the head, that is, Christ. Eph 4:15 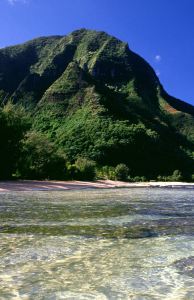 This verse articulates the quintessential expression of integrity that is the foundation of authentic human community: speaking the truth in love. Doing so is profoundly difficult, because love and truth are both very risky. To love another person is to risk being exploited. To speak the truth is to risk driving another person away. It requires tremendous vulnerability to be truthful and loving. Our natural tendency in the sea of wrath is to avoid both truth and love by keeping our relationships strictly superficial. Instead of telling the truth, we ridicule people who think that there is such a thing as truth. We might play at something like love, but with enough ironic self-detachment to protect us from disappointment or betrayal.

The foundation we need to be freely truthful and loving is an “island of mercy,” a reality in which we can trust in our unconditional acceptance and thus be unafraid of abandonment or exploitation. Those who trust that God has forgiven their sins are able to be truthfully loving to each other because God’s forgiveness eliminates one of the most powerful waves in the sea of wrath: the dishonest, socially schismatic defensiveness with which we try to justify our sin. Accepting God’s mercy means acknowledging that we are both wrong and loved anyway, which simultaneously cuts our arrogance out from under us and fills us with a spiritual security that eliminates the need for that arrogance. It is the difference between being tossed around in an ocean of social chaos and and being enveloped within a community that is vulnerable and intimate enough to be called a body.

It would not have been enough for God to simply send a band of angels to proclaim humanity’s forgiveness and unconditional acceptance with a loud trumpet blast. He had to do something with the rage that we have created in the world through our sin. So Jesus Christ, God’s Word made flesh, took all of the waves in our sea of wrath and absorbed them into His body on the cross so they could be put to death and buried with Him in order that we might have the freedom to follow Him onto the new island of mercy created by His resurrection. By giving up His earthly body on the cross, Jesus created the means for us to become His body and enter under the reign of His mercy into a world where we can speak the truth in love to each other.

Thriving on the Island of Mercy
From him the whole body, joined and held together by every supporting ligament, grows and builds itself up in love, as each part does its work. Eph 4:16

People do good for the wrong reasons all the time. You can help other people in order to create dependency and control them. You can take on a “good cause” for the sake of building your public image. Jesus constantly called out the Pharisees for following the Torah stringently not out of genuine devotion to God but for the sake of their own political power. It’s actually quite hard to do good deeds without any ulterior motive.

Jesus tells us that people who do their good deeds before others in order to be seen by them “have had their reward in full” (Matthew 6:2). But the foundation of mercy that we have in Jesus Christ provides us with the means to receive a much deeper nourishment from the good that we do. The more that we trust in the mercy that God has proven to us through Christ’s sacrifice, the less we have anything to prove with our deeds and the more that our actions are motivated by agenda-less love. When we act out of pure love in this way, our actions nourish us with God’s love and draw us more perfectly into the body of Christ.

In Methodist theology, we talk about two types of work for the parts of the Christ’s body. Works of piety are what we do to express our love of God such as corporate worship, private devotion, prayer, studying the Bible, etc. Works of mercy are what we do to express our love of our neighbors whether they are acts of compassion towards individuals in our immediate community or acts of justice in support of the dignity and well-being of the marginalized and oppressed. Both of these types of work are a means of God’s grace by which the body of Christ grows and builds itself up in love. We are never engaged in this work as autonomous individuals; it is always as part of Christ’s body that we act if we are to receive any spiritual nourishment at all.

Getting to participate in the means by which Christ builds up His body in love is the source of great joy. This itself is the meaningful contribution to humanity for which each of us have been created by God. Through the mercy established by Christ, God prepares us to be His vessels. When God then uses us as His vessels, we are given the greatest gift of all, which is intimacy with God.

So this is basically what I tried to teach our church’s confirmands, with much more 8th grade accessible language. God hates sin not because it’s an affront to His ego, but because it creates a violent sea of wrath that hurts us and keeps us from being what God created us to be. Jesus makes it possible for us to live in truth and love through the mercy established by His cross. With this foundation, we are able to enter into the joy of our Creator when we do His work in the world.

April 18, 2012
Why I'm not afraid of General Conference
Next Post

April 26, 2012 Anxiety vs. Kingdom in the United Methodist Church
Recent Comments
0 | Leave a Comment
"Fantastic blog and devotional. Thanks for sharing."
mike looker Paraklesis: a beautiful word (2 Corinthians ..."
"In any event it is God who wins people, not you. You are not the ..."
Iain Lovejoy My Best Teachers Are People I ..."
"agreed."
Brandon Roberts Celebrity-Driven Church Is Not Safe For ..."
"OK Morgan. Wow. "Grand inquisiting?" "Owe it?" It's your blog post to resource academically. You ..."
Randy Starkey “All People Are Holy”: The Theology ..."
Browse Our Archives
get the latest from
Mercy Not Sacrifice
Sign up for our newsletter
POPULAR AT PATHEOS Progressive Christian
1