Breathing kingdom on airplanes and elsewhere

In the wake of the amazing Missio Alliance conference, I wanted to continue to wrestle with the question of how we talk to strangers about Jesus on airplanes and other places. This reflection was started by Rachel Held Evans’ post on the topic a few days ago to which I responded with a comparison of Rachel’s reflections with street evangelist guru Ray Comfort of Way of the Master. A reader cried foul because it seemed like I was making a mischievous, unstated argument that was “set up,” which was a fair critique since I didn’t share my own commentary. This morning during church, I asked God how should we talk to strangers about Jesus. And the answer that came into my brain was this: assume that they’re angels and breathe the kingdom with them.

If you need a proof-text, I’ll give you Hebrews 13:2: “Don’t forget to show hospitality to strangers, for in doing so, some have entertained angels without knowing it.” Even though I am often tired and cranky and antisocial on airplanes, I really believe that every time you are forced to share two or more hours with a complete stranger has the potential to be an epic, life-changing conversation for both of you. In the movie Fight Club, Edward Norton talks about having “single serving friends,” people whom he meets on airplanes and engages in shallow banter. But it can be so much more than that.

Normally our lives are locked into daily routines in which we know who we are going to see and talk to and who we are going to ignore because we don’t have time. We walk the same basic path around the supermarket each time we visit it. I wonder sometimes if I went left first instead of right, would I smash shopping carts with one of the people whose routine involves coming each week at the same time whom I’ve never said hello to? The people who work there and the people who shop there with us are part of the backdrop, just like the other parents in the pickup line at school or on the sidelines at the soccer game. This is the world of chronos time. It moves quickly, and we must choose our words and steps very efficiently.

Chronos is a lonely, utilitarian world, in which love becomes a business relationship, and you subsist in a sort of numb, dull contentment as long as you are getting through at least 5-7 items on your to-do list each day. I wrote a song once about the world of chronos that confronted me when I was trying to hand out flyers to my band’s show on Duke campus: “Headphones and cellphones — you never walk alone. Is it such a danger talking to a stranger? what happened to random conversations that could lead to situations they could never put in sitcoms,” etc.

What a beautiful thing it is when we are forced to wait and our cellphone battery is dead and we have to live completely in the world where other living, breathing souls exist. When I used to ride the subway to work a decade ago in DC, it was there where I would write in my journal. Otherwise, I didn’t “have time” to write, not because I was actually doing something important, but because it would have involved a choice to stop doing something rather than filling up a void with something. Of course, I probably wrote in my journal on the subway because my only other option would have been to talk to the person next to me or stare at the ground (I didn’t have a walkman in that pre-ipod era).

For some reason, subways aren’t conversational places. But airplanes somehow break barriers down in a different way. Perhaps it’s because we’re strapped in, and we have to pass each other drinks. Perhaps it’s because the space is cramped and there are never empty seats so that you can’t choose the row where no one else is sitting when you get on-board. In any case, sitting with someone you’ll never see again in a space where you cannot avoid interacting in some form makes an airplane flight into a mini-lifetime in which all the daily routines and life goals have no bearing (at least when portable electronic devices are banned from use). You enter into what the Greeks called kairos time, the eternal present.

Whenever I go to conferences or music festivals, a similar thing happens. The only reality that exists is that weekend. When I was younger, I made foolish choices with women I met on that basis. But as I’ve matured in my faith and I’ve gone to Christian conferences where I meet other people who share my experience of God and also live in the kingdom, I get a lot of pleasure out of having epic conversations about what God is doing in their lives and mine. Yesterday, I got to sit down for lunch with Zach Hoag, a guy I only “knew” on twitter, and it was as though we had always been brothers. That conversation soaked me with the Holy Spirit in a way that many daily conversations don’t because it happened in kairos time rather than chronos time. The term that came to mind for it was breathing kingdom.

And it occurred to me that I’ve actually had a lot of airplane rides where I got to breathe kingdom with people. For some reason, it’s easier for me in Spanish than in English, or perhaps it’s just that a flight for a mission trip to Peru or El Salvador allows more time to talk. I wasn’t trying to “save” my seatmates. I didn’t interrogate them about whether they were Christian or were active in church, etc. We simply shared stories about our lives. I spoke in kingdom terms about mine, and some of them spoke in kingdom terms about theirs; others had a different vocabulary.

But my goal in every conversation was to learn what God had to teach me. Ever since the summer of 2008, when God very blatantly used two homeless guys to speak His word to me, I have assumed that everyone I talk to is an angel from God. I don’t mean that in any kind of freaky supernatural way (partly because I see “natural” and “supernatural” as a false dichotomy of modernity). I just feel like I should treat everyone I meet as someone who has a message from God for me, regardless of whether they know God and even if what God says through them is completely different from what they are actually saying.

There is no reason for me to act as though I have something to teach the person I’m talking to. What did Jesus Himself say when the Pharisee called Him “good teacher”? Your good teacher is your Father in heaven. Throughout the gospel of John, He constantly reiterates that He is simply sharing what the Father has given Him to say. I’m not trying to make any heretical claims about Jesus’ long-established fully divine identity. The point is that God is the one who evangelizes both me and the one with whom I breathe the kingdom.

If I have an emotional need to be the one who is “evangelizing” (interrogating, patronizing, mansplaining, etc), then two things are true: 1) I’m not engaging in genuine evangelism because it’s me talking and not God and 2) I am the one who needs to be evangelized because it shows that I am still a prideful, self-justifying person in need of salvation from my self-created hell rather than a broken jar of clay who thanks God every time He sends me an angel to love and breathe the kingdom with. I think we’re called as Christians to be people who ask Jesus to save the world from us. Perhaps our call as evangelists is to ask Jesus to send us angels to breathe the kingdom with us so that we can receive God’s amazing good news of love together.

April 13, 2013
Removing the linchpin of Christian hate
Next Post

April 14, 2013 Why you need to hear Jonathan Martin preach about heaven
Recent Comments
0 | Leave a Comment
Browse Our Archives
Follow Us! 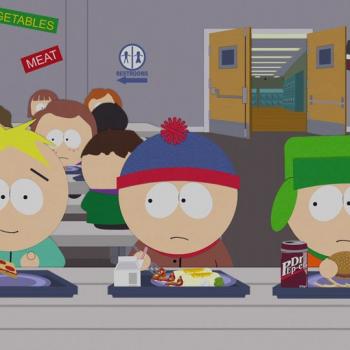