Should Christians weigh in on other peoples’ tragedies?

A friend of mine who recently had a major shift in his theology wrote the following comment on his Facebook page in response to the Boston Marathon tragedy:

Tragedies like the one in Boston seem to divide people into two camps. One clings to the “natural goodness” in humanity and swoons over the stories of heroism and chivalry while the other sees this as further evidence that our hearts are desperately wicked and in need of a Redeemer. I was once a believer in the first camp but no longer. I know the evil I am capable of all too well. I never stopped to consider that if humanity is so good, what need is there of a Savior? Boasting in our random acts of human kindness has a tendency of blinding us to our real need for Christ. God resists the proud, but gives grace and mercy to the humble.

I’m not going to use my friend’s name because I love him and this is not about shaming him, but this kind of commentary happens often enough that we need to ask whether it’s appropriate to speak this way about other peoples’ tragedies.

One of the greatest threats to our humanity at least in the world of the privileged where you and I both live is the farce that our Information Age makes out of tragedies by turning them into pageantries of manufactured emotion and rituals of obligatory commentary. I’m not questioning the sincerity of people who had kind and sympathetic things to say in response to what happened in Boston, but I do worry that the illusion of a global “community” that we create by “sending out” thoughts and prayers to the people of Boston contributes to our alienation in the real world. I can only speak from my own experience. Maybe some people really do talk to God when they write that they’re “praying” in a status update. I don’t; my prayer life doesn’t work that way. That’s why I stopped “status updating” my prayers. It’s kind of like typing the phrase LOL when you aren’t really laughing.

I did not know anyone who got wounded or killed in Boston just like I didn’t know any of the African kids who died of dysentery yesterday either. The fact that African kids died of dysentery doesn’t somehow relativize the tragedy in Boston or “put it in perspective.” Nobody should ever try to pretend like tragedy has any sort of mathematics to it. But it does make me feel like it’s more respectful to the real grief of the people suffering not to try to make their grief about me by needing to add my two cents to the viral sea. Terrible things happen all the time. When they happen to people I know, I minister to them. Otherwise, I pray in general for the healing and reconciliation of God’s coming reign.

For a Boston resident to offer free shelter or showers to strangers through social media is a completely different thing. Broadcasting that information to people who might be able to use it is entirely appropriate. And I can also see the case for holding up the example of other people doing Christlike things as a positive contribution to social media discourse. There is a kingdom-mindedness involved in showing hospitality to strangers (Hebrews 13:2) that should be affirmed and encouraged regardless of the religious status and motives of those doing it. Because when love happens, God is the one doing it, whether His presence is recognized or not. In various Christian traditions, this is called “prevenient” or “common” grace, God’s power to act through us irregardless of our awareness.

In fact, that was precisely the topic of the Daily Office epistle reading the morning after the bombing (1 John 4:7-21). Verse 12 says, “No one has ever seen God; if we love one another, God lives in us, and his love is perfected in us.” Verse 16 says, “God is love, and those who abide in love abide in God, and God abides in them.” People who engage in acts of love are abiding in God. They may not realize it; they may not receive the full benefit of it; but God uses their acts of love to draw them and other people closer to Him. It is true that as Christians, we believe that the foundation for our love is God’s decision to “send his Son to be the atoning sacrifice for our sins” (v. 10). But this doesn’t mean that we should denigrate any love which is performed by people who aren’t holding up a John 3:16 sign while they’re doing it. Because when we denigrate love, we denigrate God.

When you belittle people whose response to the grace-infused human solidarity which follows a tragedy is to “cling to the ‘natural goodness’ in humanity and swoon over the stories of heroism and chivalry,” you are denigrating God. This is particularly troubling when you’re doing this to showcase your own supposedly more orthodox and sober piety of seeing a tragic event “as further evidence that our hearts are desperately wicked and in need of a Redeemer.”

How is it not presumptuously dismissive and a betrayal of Christian witness to say in response to other people’s admiration of genuine goodness that “boasting in our random acts of human kindness has a tendency of blinding us to our real need for Christ”? Who is boasting in themselves? I haven’t seen anyone brag about what they’re doing; I’ve seen people finding hope in what others are doing. Celebrating what is good and true and beautiful whoever it involves is boasting in God. Using tragedy as an opportunity to put your theological piety on display is boasting in yourself.

I desperately wish that my friend and others like him would stop seeing contempt for humanity as a pious expression of solidarity with God. It doesn’t make you a righteous martyr to prophesy about the total depravity of everyone else, particularly in derision of other peoples’ acts of kindness and hospitality. How do you know that God is not using the very random acts of kindness that you ridicule to sow evangelistic seeds with people who need to know His mercy? This seems like a clear echo of what the Pharisees were doing when they ridiculed Jesus’ miraculous healing by saying that He was in league with Beelzebul, the prince of demons. Jesus has a name for the sin that they committed in Matthew 12:31. The Holy Spirit is at work in Boston through all sorts of people, Christian and otherwise, whose hearts God is winning through the prevenient grace of participating in His love. Don’t you dare blaspheme the love that is God’s breath in order to make a showcase of your “tough” theology.

April 16, 2013
Why is a famous evangelical pastor defending slavery?
Next Post 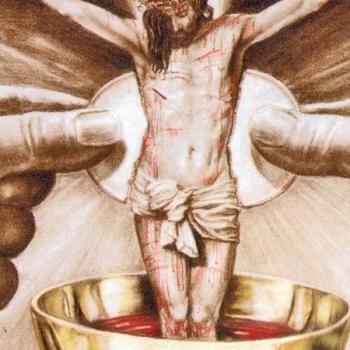