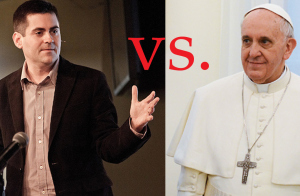 Only a Southern Baptist like Russell Moore would be crass enough to refer to a sitting pope as a “theological wreck.” Moore took exception to some of Francis’ comments in a recent interview with La Repubblica magazine in Rome regarding how Christians should be engaging the world around them. Setting aside his initial tactlessness, I think Moore’s piece is reasonably thoughtful. Francis and Moore seem to have very different views of how evangelism is supposed to work. While I can appreciate Moore’s perspective, ultimately Francis’ approach makes a lot more sense to me.

Before I get to the heart of the debate, I need to address a pet peeve of mine. There’s a very tiresome rhetorical game that gets played over and over again in modernist discourse which manifests itself in Moore’s argument. It consists in claiming the “middle ground” by presuming that truth is always a question of balancing two sides of a duality.

You cast your opponent’s view as being all about one side of the duality; then you create a phantom mirror opposite “extremist” view which is solely focused on the other side so that you can be the reasonable “moderate” who holds the two in “balance.” A big problem with this is that it makes the two terms in your duality diametrically opposed to each other like cold and hot or black and white, thus completely warping their actual meaning.

Moore deploys a very familiar false duality in evangelical Christianity which says that God’s love must be “balanced” by His holiness:

What [Pope Francis’s] interviews seem continually to do is what evangelical theologian Carl Henry warned Protestants of in the 20th century, of severing the love of God from the holiness of God. God is, Henry said, against both the liberal Social Gospel and obscurantist and angry fundamentalism, the God of both justice and justification.

God’s love is why He gets angry at us for hurting ourselves and other people with our sin. It is a fierce and fiery love that is never indifferent enough to merely “tolerate” us just as we are, though it can adapt to be as gentle and unthreatening as God chooses to be in order to win us. God’s holiness, on the other hand, is not some hard, ugly truth that we just have to accept about Him. On the contrary, it is the perfect beauty that will take our breath away when we see it but will also make us feel as horrifically dirty as Isaiah did when he saw God in the temple, absent the healing assurance of Christ’s atoning blood.

That digression aside, what was it about Pope Francis’ interview that got under Moore’s skin? The main thing Moore referenced was a section where Francis talked disparagingly of proselytism:

Proselytism is solemn nonsense, it makes no sense. We need to get to know each other, listen to each other and improve our knowledge of the world around us. Sometimes after a meeting I want to arrange another one because new ideas are born and I discover new needs. This is important: to get to know people, listen, expand the circle of ideas. The world is crisscrossed by roads that come closer together and move apart, but the important thing is that they lead towards the Good.

What I see in Pope Francis’ words is an evangelism that is playful and unpredictable enough to shatter stereotypes and confound hardened presuppositions. He has the audacity to suggest that he could actually discover “new ideas” from a non-Christian, but this is not at all the same thing that Schleiermacher was doing in trying to accommodate Christianity to its cultured despisers.

Notice that Francis hasn’t disparaged anything about Christian truths, simply an unimaginative way of presenting them. He is a perfect embodiment of Jesus’ exhortation to be “as wise as serpents and as innocent as doves” (Matthew 10:16). What’s nonsense about proselytism is the idea that we should engage other people with formulaic wooden logical arguments rather than taking them seriously as people and having genuine conversations with them, trusting God to lead things wherever they need to go.

The reason Francis can get away with his playfulness is because he doesn’t have to prove himself to his base in his conversations with non-Christians. He’s the pope. He gets to say things that are enigmatic, while the bishops scramble to reassure everybody that it’s in complete conformity with Catholic teaching. Francis gets to speak in parables. He gets to answer questions about wedge issues with more questions. In other words, he gets to talk to people the way that Jesus talked to people.

The difference between Russell Moore and Pope Francis is that Russell Moore is as pinned down as a moderate House Republican. Moore has to play to his base with what he says about Francis or he’ll get ousted as the Southern Baptist spokesperson by a nuttier fundamentalist in the next primary election. That’s why Moore has to recite the Southern Baptist catechism that the only “loving” way to speak to non-Christians is to warn them about hell: “Without speaking to the conscience, and addressing what the sinner already knows to be true about the day of giving an account, there is not love, only the consigning of the guilty conscience to accusation and condemnation.”

In a post-Christendom world, it makes no sense to talk about non-Christians “knowing [anything] to be true” about a “day of giving an account.” The problem is that the formulaic proselytism of Southern Baptists doesn’t have anything to say to someone who, rightly or wrongly, doesn’t give a flip about the concept of Judgment Day (like the cynical European journalist interviewing the pope). Now what I will say is that I actually agree with a lot of what Moore says about the gospel. It’s just misapplied as a critique of Francis’ evangelism; it makes sense as a critique of sin-squeamish preaching in a Christian context:

Opposite a harsh, rule-oriented Christianity is a way that is just as condemning, a way that we’ve seen often in hyper-Protestant communions: the tendency to downplay sin at all. This leaves sinners like us in a kind of earthly purgatory that never purges, and leads us to hide from the face of God because, like our first parents, we know who we are and what we’ve done.

I’ve experienced this kind of anemic Christianity in my beloved, sometimes agonizing United Methodism. When God’s grace is presented as a sort of generic absolution and reassurance without repentance and deliverance from sin, the result is the “earthly purgatory that never purges.” It’s only “good news” in the sense of an official proclamation that you’re supposed to pretend to be excited about because you think everybody else is. The gospel has to name our sin and its means of crucifixion in order to be the good news of our deliverance. And this should happen every time preachers are preaching to Christians.

Evangelism is completely different. And there’s no hard and fast rule about how it should always happen (unless you’re playing to your base through your supposed conversation with the other person). It’s never a formula. It’s an outpouring of the authentic spirit of a person who’s in love with Jesus and able to love other people attentively as a result of that love. It doesn’t calculate. It moves according to the Spirit’s lead. I think Francis could win a whole lot of people into giving Jesus a chance who would roll their eyes at Russell Moore the minute they figured out he was just trying to bag a decision for his savior.

I sometimes wonder if the source of the wooden formulaic evangelism we have inherited as Protestants is a dirty little paradox at the core of the Reformation. Luther was already a Christian before he got saved. He had to become an uber-rigorous and hyper-self-critical monk before he could despair of his own righteousness, throw himself at the mercy of God, and receive justification by faith and assurance of his salvation. So why in the world would we make Luther’s experience into the cookie-cutter formula for how to talk to strangers on the sidewalk about Jesus?

In the old Christendom order, it sort of worked. When everyone was nominally a Christian, you could preach hellfire sermons and get the nominal Christians to come down for the altar call to become “real” Christians (perhaps for the third or fourth time). But in post-Christendom, it doesn’t work anymore to warn strangers about the scary God that the world has stopped believing in. Too many people have seen that scary God create scary Christians who don’t act at all like Jesus. And you can’t blame earthquakes or invasions of foreign imperial armies on God’s wrath anymore.

In such a context, it’s not selling out or severing God’s love from His holiness (as though they can be pulled apart like two sides of an Oreo cookie) to make God’s beauty the centerpiece of your “pitch.” It shouldn’t be a pitch anyway, so much as an “encounter” with another person, to use Francis’ terminology. There’s no need to prove to your base that you’re “tough enough on sin” in conversations with people who don’t share your worldview or terminology.

Why not instead enchant and inspire others with unexpected testimony about God’s beauty? People who gain an interest in being part of the beauty of God are people who will then receive exhortation about the importance of pursuing holiness. “Blessed are the pure in heart for they shall see God.” Seeing God in His perfect holiness and glory is worth devoting my life to the pursuit of a pure heart through the empowerment of God’s grace, not because I’m scared of God’s glory and holiness, but because I long to bask in them eternally. It might just be that we need to become monks like Luther who desperately want to see God before the wickedness of our sin and the amazing gift of justification through Christ can start to make sense. And I think the pope’s approach is more likely to put us on that journey.

October 3, 2013
The God who wants us to be gifts (agape love) #sermon #podcast
Next Post 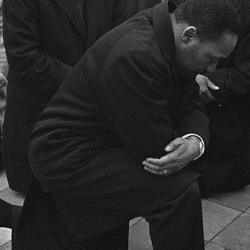