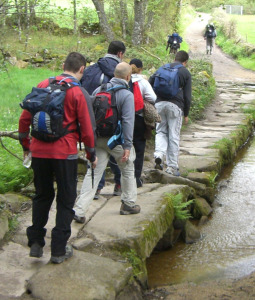 Growing up in the church, I would often hear the phrase, “We’re just pilgrims passing through,” usually in response to someone’s passion for changing the world. It means that since this is not our “true home” (heaven is), we shouldn’t worry about what happens to our world other than keeping our family safe. Hebrews 11 talks about the Israelite patriarchs who “confessed that they were strangers and foreigners on the earth” (v. 13), not because they considered earthly life irrelevant compared to “heaven,” but because they “desired a better country” (v. 16). Those who see our lives on Earth as a brief visit are tourists; those who are seeking a kingdom of God that requires more than one lifetime to build are pilgrims. Which are you?

I. Tourists are taking some time off; pilgrims are starting a new life

When you travel as a tourist, the idea is to take some time off from your busy, hectic life and return to the same busy, hectic life refreshed but basically unchanged. When you travel as a pilgrim, what you are seeking is an entirely new life. Hebrews 11:9 says about Abraham that “by faith he stayed for a time in the land he had been promised, as in a foreign land, living in tents, as did Isaac and Jacob, who were heirs with him of the same promise.”

If we are truly living as pilgrims, then we should be about as attached to the way we are currently living as though we are living in tents in a land that isn’t yet what God has promised to make it. It is tremendously ironic to say that you’re just a “pilgrim passing through” as a means of justifying a comfortable life in which you have settled in completely and see no need to change anything.

When you’re traveling with a tourist group, your hope is for the trip to stay as pleasant as possible. You can make light banter with your traveling companions, but you’re going to try your hardest to avoid saying anything that could possibly result in an ongoing conflict that would make the trip unpleasant. This is the way many people approach church, especially in my beloved United Methodism. We’re experts at being nice.

I call this form of (non-)community benevolent anonymity. One thing I will concede is that many of us are actually just introverted rather than being shallow. But that’s the reason why we need to be intentional about creating discipleship spaces in which true pilgrimage can occur. We need a space where we can be vulnerable enough with our traveling companions that we can truly be the brothers and sisters that Christ has called us to be.

When you’re a tourist, you pay somebody else to carry your luggage. In a church environment, what tourists put in the offering plate is payment for a service, the heartwarming songs and inspiring message that offer them a brief one-hour vacation from their lives. To be a pilgrim means that you consolidate your resources with other pilgrims and share the responsibility of carrying your tools. One person carries the tent, another the cooking supplies, and another the food.

In the same way, pilgrims offers 10% or more of their income to God not as a tax or tip for great singing and preaching, but in order to say that percentage of their wealth belongs to the community at large. And we absolutely do not cease being a part of the community with which we share our wealth after we share it. It’s still our money (or more precisely, money that we carry in stewardship for God); it’s just that meaning of our has expanded. If we give money without participating in the ministries that spend the money, then we’re tourists, not pilgrims.

IV. Tourists want to know the future; pilgrims trust God to lead them

When you’re a tourist, or at least a responsible one, you do a lot of shopping around before you go on a trip. You want the tour company that gives you the most bang for your buck. If one visits 5 museums in Paris and charges $200, then you’re going to pick that one over the one that charges $250 for 4 museums. Tourists need to know exactly what’s going to happen. If something happens that was unexpected, that’s cause for a refund or perhaps even a lawsuit.

In contrast, Abraham “set out, not knowing where he was going” (v. 8). To be a pilgrim doesn’t mean being flippant and lackadaisical about the future. It doesn’t mean you don’t make budgets or covenants or engage in any sort intentionality. But it does mean that you’re willing to adapt to whatever God throws at you. A pilgrim plans for the journey, but a pilgrim is unanxious about the future because God will provide and one of the ways God provides is through the shared resources of the pilgrims who trust God together.

There are three basic photo ops having to do with the church: when you baptize your baby, when your baby gets confirmed, and when your baby gets married. So if you’re a tourist, you only need to go to church three times, plus of course the annual photo ops of Christmas and Easter. Some tourists may go to church and Bible study regularly, but they’ve basically checked out of the journey of discipleship, because to them, salvation was a one-time event that happened on the day they prayed Jesus into their hearts.

When you’re a pilgrim, you hunger for salvation. One of the first Christian martyrs, Ignatius of Antioch, wrote that he would know whether he was actually a Christian or not according to how he reacted when the lions were tearing his body apart. For pilgrims, salvation isn’t the wildly successful industrial complex that it’s become in megachurchianity. It’s a quest to see the face of God. The closer we get, the further we realize we have to go, but this realization does not disappoint us because the joy increases all the time. Accepting the gift of Jesus’ justifying sacrifice for our sins is the first step on that journey, but we will not stop being saved until we are in eternal communion with God.

November 22, 2013
My duty to the Bible's living interpretive tradition
Next Post

November 27, 2013 Another item for Dave Ramsey's list of what rich people do that poor people don't do
Recent Comments
0 | Leave a Comment
Browse Our Archives
get the latest from
Mercy Not Sacrifice
Sign up for our newsletter
POPULAR AT PATHEOS Progressive Christian
1

Key findings about religion and 'abortion'...
slacktivist
Related posts from Mercy Not Sacrifice