When the Equal Rights Amendment was “gay marriage”

The amnesia of America culture always fascinates me particularly with regard to the things that are perceived to be “threats to the American family.” When anti-gay Christians are asked why they make a big deal out of homosexuality, the standard response is to say that the gay people were the one who made it a big deal and they simply offered a “Biblical” response when asked. There are many different legitimate personal stories that overlap in sociological phenomena, but it’s simply not accurate to treat the “gay marriage” battle as a stand-alone historical issue; it’s one battle in a larger war that has been waging between conservative Christianity and the feminist movement for the last half-century over the meaning of gender. The “gay marriage” crisis of the seventies and eighties had a different name: the Equal Rights Amendment (ERA), a proposed constitutional amendment that would have made any gender-based discrimination illegal, which was successfully defeated by conservative activists under the leadership of Phyllis Schlafly.

It seems like an entirely different world, but when I was growing up, it was very controversial (at least in white middle-class Southern Baptist circles) for women to work outside of the home. Men were supposed to be the breadwinners and women were supposed to raise the kids. That was just how we were created by God as men and women. There was plenty of scripture to back this view. It was selfish and prideful for women to put pursuing a career above raising a family. There were plenty of outlets for them to use their gifts through volunteer work with the church. For women to work meant that their kids would get warehoused in daycare clinics where they might get molested. In communist countries, they made women work in the factories and put their kids in daycare, but America was different because we cared about freedom and family values.

It probably seems inconceivable today that a constitutional amendment guaranteeing equal rights for women and men would fail to get ratified only 30 years ago, but that’s what happened, thanks to Phyllis Schlafly and other conservative activists. The ERA had great momentum before she started, getting ratified by 30 out of the necessary 38 states in 1972 and 1973, but then the momentum sagged when Schlafly’s campaign started to gain steam. Schlafly’s argument was that the ERA would make women absolutely the same as men. They might get drafted for the military and sent into combat, single gender bathrooms would be eliminated, women wouldn’t be able to get alimony or custody of their kids after a divorce. Schlafly won (though of course we have to keep in perspective that “winning” only meant keeping more than 12 out of the 50 states from ratifying it by 1982).

Schlafly’s movement may have won the battle then, but three decades later, they have completely lost the argument. With the exception of a much reduced enclave within conservative evangelical Christianity, it is no longer considered a moral issue for women to stay home while their husbands work. That hill of the battlefield has been quietly surrendered and retreated from. Why? Because it’s no longer economically viable for middle-class families to make it work (working class women have always worked). And championing the right of women to be stay at home moms would require campaigning for a higher minimum wage and supporting the struggles of labor unions, which would pit “family values” against “free market values.” In a head-to-head between the family and the free market, the free market seems to have the trump card every time. Hence the quiet retreat.

The debate thirty years ago about women working outside the home is actually very similar to the debate today about gay marriage in terms of the core question that’s being asked. Are all women supposed to be the same just like all men are supposed to be the same? To argue that all women are supposed to be stay-at-home moms or that all women are supposed to marry men means making it a moral issue to conform to the standards of your respective gender. Likewise to argue that some women are great stay-at-home moms while others make great lawyers is consistent with arguing that while most women are biologically wired to mate with men and vice-versa, some are wired differently. In such an argument, you’re saying in both cases that gender is more complicated than either/or.

The reason that conservative evangelicals make gender normativity into a moral issue is because there are places in the Bible that seem to tell all women and all men to do things a certain way, like telling all wives submit to your husbands, all women to cover their heads in church, etc. This is certainly a plausible way to read what the Bible has to say about gender (if it’s applied consistently). Other Christians (like me) argue that these instructions to women and men are contingent upon their cultural context, basically that Paul was saying since Roman society defines the family as being under the headship of the male paterfamilias, let’s do the Roman thing in the most Christian way possible, but that ultimately the gospel vision is for there to be “no longer male and female for all are one in Christ Jesus” (Galatians 3:28).

I’m perplexed by the way that my denomination, the United Methodist Church, wants to hedge its bets by allowing a Galatians 3:28 vision for a “post-gendered” (?) body of Christ to trump the plain meaning of scripture in Ephesians 5:22, 1 Corinthians 14:34, 1 Timothy 2:12, and other places when it comes to women serving in ordained ministry, but then casting aside Galatians 3:28’s eradication of gender normativity when it comes to LGBT issues. To believe that the Bible condemns homosexuality is contingent upon making the 1st century presumptions about gender in Paul’s epistles permanently normative for all Christians at all times. We either live in a world where all women are supposed to act the same and all men are supposed to act the same, or we don’t. It’s artificial and dishonest to treat these issues piecemeal.

For what it’s worth, I don’t think it’s an unqualified good that free market pressures on wages ultimately won the debate over Phyllis Schlafly and her “family values” so that most married middle-class households have to rely on two incomes today. Why couldn’t we divide up the work in our society differently so that everyone would have 25-30 hour work weeks, currently unemployed people would have jobs, and kids would spend a minimal amount of time in daycare? I realize that’s a very Pollyanna thought. The free market requires everyone who has a job to work like crazy and maximize their efficiency so there will be even fewer people with jobs next year.

My wife and I are blessed to have the resources to enable her to stay home with my kids until my youngest starts elementary school. The reason she’s the stay-at-home parent is not because she’s the female but because of where each of us were in our ministerial ordination process three years ago. When I was a seminary student and my wife was a chaplain resident at Duke hospital, I was the stay-at-home parent. In our home, there are some things I’m better at and some things that my wife is better at in terms of how we parent and manage our household. I have no idea which of these things have to do with our gender and which of them have to do with our personalities, nor does it seem like a grave moral matter for us to figure that out.

January 3, 2014
A letter that captures the heart of the Methodist conflict
Next Post

January 6, 2014 The difference between spiritual purity and moral cleanliness
Recent Comments
0 | Leave a Comment
Browse Our Archives
Follow Us! 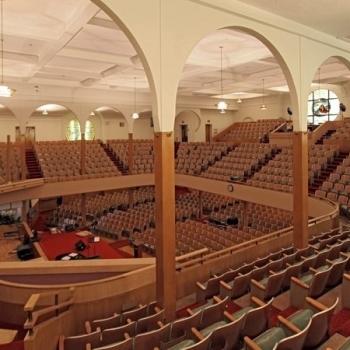