It should come as no surprise that arch-fundamentalist Al Mohler went all in with a full-throated defense of Young Earth Creationist Ken Ham after his debate last night with Bill Nye “the science guy,” for which Mohler got a front-row seat. Mohler cast the debate as a “clash between the worldview of the self-declared ‘reasonable man’ and the worldview of the sinner saved by grace.” Basically, Mohler’s argument amounts to saying that humanity is so utterly depraved from Adam and Eve’s fall into sin that we shouldn’t trust ourselves with microscopes or Bunsen burners since the Bible is the only reliable source of truth. This goes way beyond having a sense that the Bible is an authoritative religious guide; it’s a completely nihilistic, even solipsistic claim about human epistemology.

Here is how Mohler articulates his argument:

The problem with human reason is that it, along with every other aspect of our humanity, was corrupted by the fall. This is what theologians refer to as the “noetic effects of the fall.” We have not lost the ability to know all things, but we have lost the ability to know them on our own authority and power. We are completely dependent upon divine revelation for the answers to the most important questions of life. Our sin keeps us from seeing what is right before our eyes in nature. We are dependent upon the God who loves us enough to reveal himself to us—and to give us his Word.

This is a very radically negative view of human nature that could be referred to as Biblical nihilism, namely that our minds are so broken that “we are completely dependent upon divine revelation for the answers to the most important questions of life.” I’m not sure that Mohler has thought through the implications of his statement, which seems like an undigested doctrinal assertion, but to use it as he does to argue for Young Earth Creationism is to say that no scientific knowledge gained through genetics, biology, paleontology, archaeology, and so forth can be trusted because the human scientists who discovered this knowledge were so wicked that they were kept “from seeing what is right before [their] eyes in nature.” In other words, the fall of Adam and Eve are the reason that carbon-14 dating has been lying to us all this time.

Who then can be trusted if we cannot trust what is right before our eyes? Well, the Bible of course, but not just any reading of the Bible — only those who read the Bible sharing Al Mohler’s presupposition that humanity is totally depraved and nothing outside of the Bible can be trusted as a reliable source of knowledge. Mohler’s Biblical nihilism thus creates an elite category of Christian teachers who “get it.” Since the masses cannot know anything “on their own authority and power,” there is a tremendous need for them to have a teaching pastor on whom they can depend to interpret God’s word to them and thus to whom they give all their authority and power.

The doctrine of total depravity is why the Calvinist Southern Baptists have the biggest, most thriving megachurches. It’s a very successful business model: to create a tight authoritarian culture built on the nihilistic fear that we cannot know anything “on our own authority.” And it’s entirely self-serving when you’re at the top of the pyramid like Al Mohler. The more radically Mohler talks about the human inability to know anything for ourselves, the more power he gives to himself as a Biblical teacher who gets it.

The reason that modern secularism came about is because Christians were brutally slaughtering each other in Europe in the aftermath of the Reformation on account of the conflicting authorities to which they subscribed. Thinkers like Descartes and Kant sought a way beyond the impossible impasse of two groups of people who didn’t think they could think for themselves and either killed Catholics because of sola scriptura or killed Protestants because of the pope.

I don’t have any love for the epistemological arrogance of the “reasonable man” of modernity (which Mohler has also inherited and built his theology from). But the nihilism Mohler advocates is dangerous. Because when you have so little confidence in your own mind, you don’t ask questions that need to be asked. You blindly obey leaders whose paranoid ideology about human wickedness cannot help but intensify their rationalization for ratcheting up their own power (since other people can’t be trusted).

The 2011 film “Salvation Boulevard” does a good job of capturing the disastrous results of a culture of people who don’t believe anything on their own authority but trust their pastor in everything. Pierce Brosnan plays a megachurch pastor who has a widely publicized debate with an atheist professor Dr. Paul Blaylock and then accidentally shoots him in the head before going through an elaborate scheme to cover up his crime and pin it on one of his church members.

Mohler’s theology will continue to preach because it builds big churches, and people who are afraid of thinking for themselves like to feel like they’re part of something powerful. Paradoxically it’s my mistrust of my own cognitive abilities as a Biblical teacher that prevents me from thinking the Bible is simple and clear enough that I can dismiss every other source of knowledge about the world. I guess Mohler is sure enough of himself that this isn’t a problem for him.

February 5, 2014
Did we crucify Jesus or did God? (Using @ScotMcKnight to bludgeon bad atonement theory)
Next Post

February 6, 2014 Why we need safe sanctuaries (two personal stories TW SA)
Recent Comments
39 Comments | Leave a Comment
"As long as you believe in some uber demon you will always be fearful of ..."
JD Satan As The Virus of Enmity
"Mrs. Smith? Sorry, can you tell me what that means please? I'm not much of ..."
Malissa “All People Are Holy”: The Theology ..."
"Well I know a Palestinian priest who had his home bulldozed.Why do you think there ..."
Bones Iran, Mike Pompeo, and the Total ..."
"Jesus paid the price for our sins. It is up to each person to accept ..."
Guthrum What does the blood of Jesus ..."
Browse Our Archives
get the latest from
Mercy Not Sacrifice
Sign up for our newsletter
POPULAR AT PATHEOS Progressive Christian
1 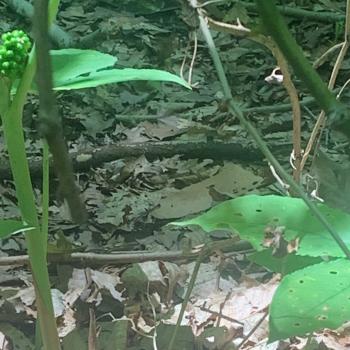