If I made a coloring book for my church vision…

If I made a coloring book for my church vision… February 19, 2014 Morgan Guyton

My friend Matthew Paul Turner shared a page from the coloring book Steven Furtick has used at his Elevation Church to share the church vision. I wanted to offer my own version, but I’m not very talented artistically, so I cheated and Photoshopped an actual photo from our worship service using the “Charcoal and Chalk” filter. It’s a photo of a kid serving communion because that’s what he wanted to do more than anything else so I let him. Some of you may be scandalized by the impropriety of it. But I would choose this picture for the first page in my church vision coloring book because I think church should be a place where all people, including children, are encouraged and empowered to seek their own visions from God that they are equipped by their pastor to live out. 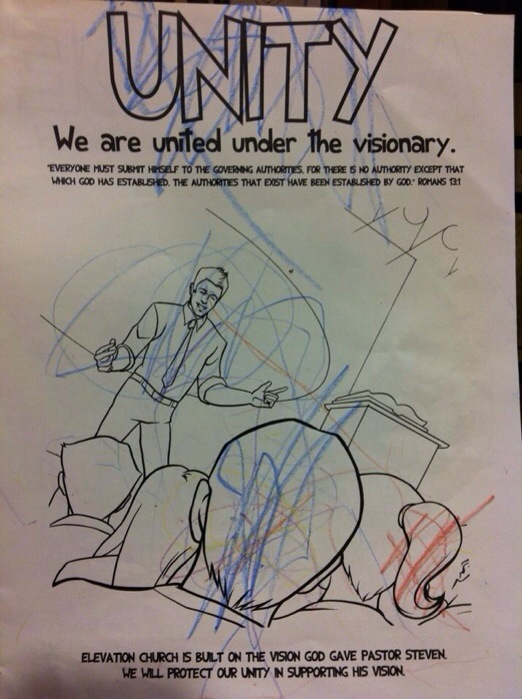 Some people have said that this coloring book is proof that Elevation Church is a cult and other stuff like that. I don’t think that’s completely fair. I think that Steven Furtick is genuinely trying to be faithful to the theology he was taught. His theology seems to say that people should not be trusted to seek their own visions for ministry because human nature is utterly wicked. Instead, they need a single strong leader who is well-studied in scripture to tell everybody else what the vision is. One thing that this theology gets right about human nature is that humans are more inclined to follow than to lead, especially when your leader is young, charismatic, and good-looking (which is not to make any underhanded dig on Steven; it’s just how he is).

Steven’s approach to ministry is an incredible success. I don’t think there’s any other church plant that has grown as astronomically in 7 years as Elevation Church has. Part of their growth does stem from the fact that they are incredibly market and tech-savvy. They brand everything according to their orange logo. Their church covenant is called “Code Orange.” Their volunteer community service work is called “the Orange Initiative.” As much as I want to knock them for being “inauthentic” since they’re “polished,” their branding and marketing has enabled them to help a lot of people in real material ways in Charlotte. It’s dishonest to act as if the Holy Spirit has been utterly absent from their midst. God has been at work in their midst both because of and in spite of Steven’s incredible skill at building a cult of personality around himself.

I’ll never forgot the most shocking thing I learned at church planter training. I asked the trainer, “How do we do all this without creating a cult of personality around ourselves?” He said to me, “You’re supposed to build a cult of personality. That’s the point. Attract them to you and once they’re attracted to you, take them to Jesus.” I don’t think the Methodists would be very wise to let me plant a church for them, because I would be unable to get through my sermon without vomiting if I looked out and saw my congregation saturated in orange t-shirts or mauve or ochre or whatever color we decided to make our logo.

I’m not judging Steven Furtick and Elevation Church for their incredibly effective marketing; I’m just recognizing that I’m too much of a hipster to ever be effective in that kind of way. Plus, I’m bald, my beard doesn’t grow evenly, and I have two crooked front teeth that are really obvious every time I talk in one of my sermon series promotion videos that gets three or four hits on youtube.

But there are some larger issues for me as well. My favorite part of the worship service is saying “Body of Christ broken for you” and looking into the eyes of someone whose history I know while addressing that person by name. I don’t think I have room in my head for more than a couple hundred names and life stories at a time, so that would probably be the biggest congregation I could be comfortable with.

Another problem is I’m not good at cutting people off during joys and concerns time when they start to kill the mood. I once let a very chatty homeless guy come up front and ramble for seven minutes of very joyful but completely incoherent testimony before someone from the congregation got up, gave him a big hug, and helped him back to his seat.

And then there’s my kid problem. I not only let kids help serve communion and pass the offering plate. Their favorite thing is dancing in the aisle for the last song after we take communion. I thought that this was going to be a huge marketing hit when they first started doing it. I was so sure that branding ourselves as the service “where a kid can be a kid” (wasn’t that a jingle in the eighties for something?) would make our attendance double after my first year. It actually makes the visitors not return. We’ve atrophied by about 10 people since I inherited the service. It seems like a great concept, but when kids dance in real life without caring what it looks like, they don’t exactly make stock photos with their bodies.

Perhaps my biggest problem is that I still don’t know what the hell “leadership” is. I’m stuck on Jesus’ statement about us needing to become like children and then telling his disciples in the same chapter not to lord it over each other like Gentile princes but to be servants first and foremost (he never added “leader” to the word servant; that was a later correction to the text). So I’m not very bold and decisive about decision-making. I believe that I’m supposed to listen carefully to what God tells me through his people and allow myself to be taught by them.

I’m not sure what “casting a vision” means either, though I’ve heard all the famous pastors like Steven Furtick, Andy Stanley, and Rick Warren talk about it. The closest I’ve come to it was when I was at a retreat workshop where we were talking about how to  transition our churches from a culture of volunteerism to a culture of discipleship, and I thought I heard God say to me, “Every disciple needs a vision,” so I wrote it down. I took it to mean that the laypeople are supposed to have the vision and I’m just supposed to empower and equip them to live it out. Still trying to figure out if that’s what God meant or if I misunderstood him.

Anyway, my approach to ministry yields about 50 on a good Sunday evening. Steven Furtick has 15,000 each week at 10 different campuses after only 7 years. So it’s clear whose approach is working. Maybe I’m just carved out to be a crooked-toothed 50 person pastor instead of a captivating visionary with thousands of followers. But I wouldn’t trade places with Steven Furtick if it meant that kids wouldn’t be allowed to help me serve communion.

February 19, 2014
Our Journey as a Celibate LGBT Christian Couple (a guest post by Sarah and Lindsey from A Queer Calling)
Next Post

February 21, 2014 Why my heart is torn between Russian Orthodoxy and Pussy Riot
Recent Comments
0 | Leave a Comment
Browse Our Archives
get the latest updates from
Mercy Not Sacrifice
and the Patheos
Progressive Christian
Channel
POPULAR AT PATHEOS Progressive Christian
1

Halloween Is A Celebration of Change,...
Thoughts of a Modern Celtic Wanderer
Related posts from Mercy Not Sacrifice