When children get in the way of our boundaries in Gaza and California July 18, 2014 Morgan Guyton 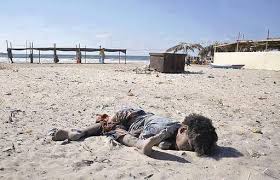 Children get in the way. It’s what they do. My children get in my way all the time whenever I want to have a simple Gnostic life where I don’t have to acknowledge the physical world outside of my laptop. My youngest son is the worst. He’ll say things like “Daddy, I just want to spend some time with you,” and then I can’t just turn back to whatever I was doing. I was running on the beach with him last night, and I had a chilling moment. A wave hit him and he fell over and I panicked for an instant before helping him back into his feet. Because what flashed into my head was the thought that if we lived in Gaza, it wouldn’t be a wave that knocked him over but an Israeli artillery shell.

I’m sure their parents told them not to play soccer on the beach: those four boys who got slaughtered by the Israeli shell a few days ago. It takes a severely clueless, air-conditioned kind of privilege to dismiss the tragedy of death with a phrase like “human shields,” as though the people of Gaza enjoy dying in order to make Israel look bad. The boys playing soccer on the beach weren’t trying to create a PR problem with their bodies. They were playing the way that kids do, getting in the way of our “reasonable” boundaries of warfare, which say that civilians should know better than to play soccer in a war zone. They should have evacuated to… somewhere else in the most densely populated strip of land in the world where anyone who gets within several hundred yards of the border fence with Israel is shot and killed with impunity by Israeli snipers.

Children get in the way. They create PR problems. If a guy named Mohammed gets killed playing soccer and he’s 25, then the assumption of the Western media covering the story would be that he was probably a “legitimate” terrorist target, kind of like when a 25 year old black man is handcuffed for dubious reasons in America and nobody asks any questions. Children cannot have their humanity summarily dismissed with the label of “terrorist.” What the word “terrorist” means in today’s discourse is someone whose humanity can be dismissed, who can be assassinated along with their family without a trial because they’re enough of an imminent danger to humanity. It’s not considered terrorism to blow up the family home of a “terrorist” as collective punishment, but the problem is those damn children get in the way and then their bloody bodies get paraded around social media and maybe a few of those photos can be dismissed with the claim that they’re recycled from other conflicts in the Arab world like Syria, but there are too many children getting blown up to say that the whole thing is a fabrication.

When children get in the way by doing dastardly things like playing soccer in a war zone, they call us out for thinking that war could ever be clean and noble. I don’t believe for a minute that the Israeli soldier who fired that artillery shell on the Gaza beach was deliberately trying to kill children. The soldier made a very tragic and costly mistake, and unlike the mistakes that are made in other lines of work, this mistake means that the family of these boys will spend the rest of their lives in grief. Even using the word “mistake” is offensively unjust; it’s way bigger than a mistake. The problem is that war itself is terrorism. We try to use labels like “terrorist” to distinguish between “clean” war and “dirty” war, but the hideous reality of war defies our efforts to rationalize it. I’m not saying there’s no difference between deliberately blowing yourself up in crowded marketplaces to maximize civilian casualties and trying to differentiate between military and civilian targets. But we shouldn’t pretend as though war is morally unproblematic as long as we can point to some paragraph in a policy manual somewhere that “proves” there was an effort to “minimize” civilian casualties. The problem is that children get in the way. They won’t let us make peace with war.

There’s another way that children have been getting in the way lately. By invading our borders. I’ve been reticent to write anything about that issue, because it seems like a very easy and not entirely fair progressive Christian Jesus juke to score points on. It’s obviously disgusting that racist white people are blocking the immigrant children’s buses and yelling hatred at the children on board. But there’s a legitimate ethical complexity to this situation from the US government’s perspective. If all the children are simply absorbed into the child welfare systems of California, Arizona, New Mexico, Texas, etc, then who’s to say that another 50,000 won’t show up next month? Instead of wagging our fingers at our hard-hearted fellow citizens, Christians who feel passionately about supporting the immigrant children ought to be talking seriously about how we might provide foster families for them if their parents aren’t already here in our country. Imagine if a coalition of churches were able to go before ICE and say that we’ve pulled together 50,000 host families for these children so we can take them off your hands.

Of course, the presence of children invading our borders is a reminder that global capitalism isn’t a clean system and the US government doesn’t have clean hands historically in our dealings with the countries from which these children have migrated. They’re fleeing from some of the most violent cities in the world. Tegucigalpa and Guatemala City are every bit as dangerous to live in as countries where there’s actual war going on right now like Syria or South Sudan. Ryan Grim describes eight ways in which US domestic and foreign policy has created the context for these violent gang-infested societies. He notes that there aren’t any refugees coming to us from Nicaragua, the only Central American country that somewhat prevailed against the US during our dirty wars of the 1980’s when we funneled millions of dollars to death squads in a misguided attempt to stomp out communism. In addition to the factors cited by Grim, the International Monetary Fund has put such a choke-hold on the Central American governments through structural adjustment conditions on their foreign debt loans that they aren’t able to pay for reasonable civil services like a well-equipped police force. A government that can’t pay its people because it’s paying ridiculously unfair levels of interest on its loans inevitably forces its employees to embrace corruption as a matter of survival.

I can’t do justice here to the economic and political complexities of Central America. In any case, their damn children are getting in the way of our American prosperity. We want to be able to draw a border around the part of the world that we feel responsible for, but it doesn’t work that way. We can draw lines in the desert and even build giant walls with electrified fences to reinforce these lines, but the interconnectedness of humanity doesn’t respect our borders. That doesn’t mean that you or I are personally responsible for adopting all 50,000 or however many children have come across the border. But if we’re Christians, then we are responsible for assessing this situation as a body of Christ and collectively obeying our savior’s command to “let the little children come to me.” I don’t know the logistics of what that actually looks like, but I need to be praying about it and you do also. The children get in the way of me thinking I can just ignore the situation and move forward. 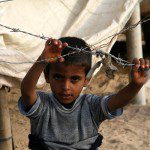 July 20, 2014 An enemy is someone whose story you haven't heard
Recent Comments
7 Comments | Leave a Comment
Browse Our Archives
get the latest from
Mercy Not Sacrifice
Sign up for our newsletter
POPULAR AT PATHEOS Progressive Christian
1

Christianity Does Not Solve the Problem...
Freelance Christianity
Related posts from Mercy Not Sacrifice