Why I like Pope Francis’ “God of surprises” October 23, 2014 Morgan Guyton 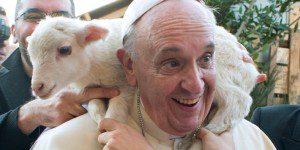 It’s little secret that progressive evangelicals like me have a huge crush on Pope Francis and probably project a lot of unmerited wishful thinking onto him. The Roman church’s recent synod on the family revealed among other things how little power Francis actually has to impose change by fiat. I respect him for patiently seeking a consensus among the stuffy bishops he’s surrounded by. It took many generations for the church to finally admit that Copernicus was right and give up geocentrism. It took many more centuries for the church to finally relax its semi-gnostic view of sex being a necessary evil solely ordained for the purpose of procreation. Regardless of what Francis is able or wanting to accomplish regarding the church’s recognition of humanity beyond the heteronormative binary, he was speaking my language when he preached about the “God of surprises” during the family synod.

One of the most important verses in the Bible for me is John 3:8: “The wind blows where it chooses, and you hear the sound of it, but you do not know where it comes from or where it goes. So it is with everyone who is born of the Spirit.” The church has stopped being the church if it is not light enough to be blown about in the wind of God’s breath. Our goal as Christians is not to weigh ourselves down with rigorous enough systems of truth so that we can stand our ground like solid marble statues, but to be emptied enough of our cultural baggage, presuppositions, and idols that God can blow us wherever he wants to. Obedience and conformity to Christ should make us lighter, not heavier. The holiest people that I’ve encountered all seem to grow less certain of themselves the closer they grow to Christ. The original word for church, ekklesia, often gets translated as “gathering,” but most literally it means the “out-calling” of God (ek+ klesia). The true ekklesia are those who have made their hearts so intimately available to God that he can call them out of their comfort zones and systems for explaining him with the faintest of whispers. The legitimate task of Christian orthodoxy is not to build an airtight box to put God in, but to remove the veils from our eyes and the wax from our ears so that we are able to hear the voice of God and be the dynamic temple of light-refracting icons that the apostle Paul describes in 2 Corinthians 3:18: “And all of us, with unveiled faces, seeing the glory of the Lord as though reflected in a mirror, are being transformed into the same image from one degree of glory to another; for this comes from the Lord, the Spirit.” This doesn’t mean that every wind is the Holy Spirit or that erratic turbulence is necessarily what healthy faith is supposed to look like. It doesn’t mean that we shouldn’t immerse ourselves richly in Christian tradition as part of how we learn how to hear the strange, soft whisper of God, which we shouldn’t underestimate the difficulty of doing. But if we love tradition for the sake of tradition and especially if we love giving ourselves the authority to police what can be said about God, then we have closed ourselves off to to the wind of the Holy Spirit and we are like the stuffy religious leaders Jesus fought whom Francis describes in his homily:

They had perfectly organized the law, a masterpiece. All of the Jews knew what one could do, what one could not do, how far they could go. Everything was organized. And they were safe there… They did not understand that God is the God of surprises, that God is always new: he never contradicts himself, never says that what he had said was wrong, ever, but he always surprises us. And they did not understand, and closed themselves in this system created with the best of intentions.

In every age, the church has had religious insiders who are doing the same thing that the 1st century Pharisees were doing: perfectly organizing the law to create a masterpiece, casuistically covering up every possible loophole and caulking every crease in order to safeguard against the possibility of any surprises. They say that God doesn’t do surprises because surprises would make God untrustworthy and constitute a betrayal of his covenant. I say that one of the main reasons God does throw surprises at us is in order to shake up his house enough so that no one can hegemonize his truth which would amount to making gods of themselves. God is not sovereign unless he’s able to shred the nets of his handlers “so that no one may boast before him” (1 Corinthians 1:29). One thing which I share with my more conservative evangelical brothers and sisters is a zeal for defending God’s sovereignty. We just understand our task very differently. Whereas conservatives want to defend the things God says and does in the Bible from criticism, I want to defend God’s ability to surprise us today. I think that certain conservatives in their apologetic zeal have built such an impenetrable fortress around God that they have foreclosed the possibility of any divine wind getting through. I would contend that the task of defending the most troubling words and actions of God in the Bible, while admirable, is more concerned with the sovereignty of the individual Bible interpreter than the sovereignty of the strange God who allowed himself to be represented in ways whose legitimate embarrassment we ought to be willing to admit. It’s because of the permeated legacy of Christian values throughout our culture, however secular it’s become today, that the God presented by the Canaanite conquest is so difficult to stomach. We have to accept that somehow the book of Joshua is part of what’s “God-breathed and useful for teaching” (2 Timothy 3:16), but we don’t have to find a way to make it make perfect sense. When in your quest to defend a mysterious God, you show how everything he does is perfectly reasonable through an elaborate system of explanation, then what you are actually doing is trying to conquer God’s mystery. I’ll readily admit that I’m ideologically invested in God’s capacity to surprise us, independent of any particular social issue. It would be existentially devastating to me if someone was able to prove finally that everything that needs to be said about God has been said so perfectly already by people who came before us so we should all just shut up and not say anything else. Augustine didn’t cover it all. Neither did Calvin. Even Barth (gasp!) didn’t cover it all. I cling to the hope that God has providentially provided a way for there to be more surprise epiphanies and discoveries for us to make, because how I worship God with my mind is to search for his new surprises. It seems like for some Christians, the goal is to resolve every riddle and close every conversation loop decisively once and for all. The wild God I worship smashes every decisive conclusion about him like the whirlwind that blew the minds of Job and his friends. These whirlwinds of surprises are my favorite part about him. 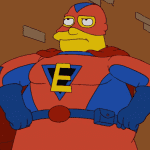 October 21, 2014
Where I'm actually coming from as a progressive evangelical
Next Post 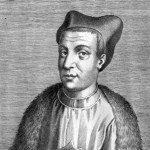