How Jesus saves through Michael Brown and Eric Garner 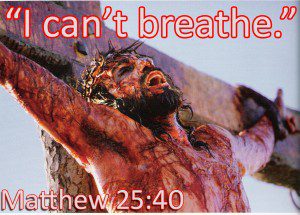 One thing that I never tire of pondering as a Christian is how Jesus’ cross saves me and what it saves me from. Growing up evangelical, the answer was simple: Jesus took the punishment for my sin to save me from an angry, perfectionist God who wanted to burn me in hell forever. But this explanation looks nothing like the salvation that takes place in response to Peter’s first sermon about Jesus’ cross in Acts 2. Peter says nothing whatsoever about hell. So what does he say that people need to be saved from? He tells the crowd, “Save yourself from this corrupt generation” (v. 40). And how does the cross accomplish this salvation for Peter? It causes his hearers to be “cut to the heart” (v. 37) after Peter tells the crowd that they killed their messiah. They are saved not by being legally exonerated in some abstract heavenly courtroom, but by having their hearts mortally wounded by their implication in the murder of their king. In other words, Jesus’ cross saves them by unmasking their sin and putting it on public display in the ugliness of his brutal death. None of the modern formulaic Romans Road “four spiritual laws” account of salvation was part of the experience of the original three thousand converts to the Christian faith. Since we are two thousand years removed from Jesus’ crucifixion, it’s an abstraction to associate our sin directly with Jesus’ cross, so we cannot be saved in the same manner as the first 3000 Christians, unless we recognize that our sin continues to crucify Jesus in places like Ferguson, Missouri and Staten Island, New York in the murders of Michael Brown and Eric Garner.

There are three places in Acts where the phrase “cut to the heart” is used. In Acts 2:37, the crowd that is “cut to the heart” by Peter responds with abject humility, saying “Brothers, what should we do?” So Peter baptizes them and they become the original Jerusalem church. In this first case, being “cut to the heart” results in repentance. But in Acts 5:33 and 7:54, the Sanhedrin council of religious authorities are “cut to the heart” in a very different way by the testimony of Peter and Stephen respectively (the phrase in Greek is dieprionto tais kardiais, which should be translated literally “cut to the heart” as it is in the King James Bible even though the NRSV translation paraphrases it as “enraged”). The cutting of the Sanhedrin’s hearts has the opposite result from the crowd that was saved by Peter’s sermon. They are hardened into rage instead of being broken into repentance. In Peter’s case in Acts 5, his life is spared by Gamaliel who warns his fellow religious authorities that they might be fighting against God if they kill Peter. In Stephen’s case in Acts 7, he is taken out and stoned to death. When people are “cut to the heart” by the recognition that they have blood on their hands, they either respond with remorseful surrender or angry defensiveness.

So “cut to the heart” can have two opposite results. Kind of like how there are two opposite ways to respond to the naked injustice that has been put on display by the crucified bodies of Michael Brown and Eric Garner. The more that the river of blood from dead black bodies makes it impossible to say that we don’t live in a racist society anymore, the angrier it makes white people who resent being cut to the heart by the conviction of the core defining sin of American society whose existence they adamantly refuse to recognize. Meanwhile other white people see this injustice and are put to shame by it, which becomes the means of their salvation from “this corrupt generation” in which racism is alive and well.

What if the deaths of Michael Brown, Eric Garner, Tamir Rice, John Crawford, and all the other black men who die every 28 hours at the hands of police are the means by which Jesus is separating the sheep from the goats among his professed followers just like he describes in Matthew 25:31-46? Michael Brown, Eric Garner, and all the rest of these men are not blameless Jesuses anymore than any of the rest of us sinners are, but Jesus makes it very clear that whatever we do to the least of our brothers and sisters, we are doing to him. How we react to their deaths is a test that reveals whether we are sheep or goats. Which way will our hearts be cut? Will we be offended when people talk about racism and say that they’re being divisive and promoting violence? Or will we be like the crowd that got saved because they asked Peter and the apostles, “Brothers, what should we do?” How many white people in our country right now are willing to say to our brothers and sisters of color, “What should we do?” with complete sincerity and radical submission, willing to listen closely and obey, whatever the answer is.

I don’t think that you get to consider yourself “saved” by your belief that Jesus died for your sins if you are not also cut to the heart by the ways that you participate in Jesus’ crucifixion in the world today. It’s ludicrous to say that Jesus died for your sins if you’re unwilling to admit that you have crucified Jesus, you who have always minded your own business, you who say you’re a sinner just because it’s theologically correct even though you would draw a blank if asked to name your most recent sins, you who have a couple of black friends, you who resent being blamed for your ancestor’s mistakes that should be buried and forgotten with the past. You yourself have crucified Jesus and his black brothers and sisters just like I have.

Peter said to that crowd of three thousand in Acts 2:36, “Therefore let the entire house of Israel know with certainty that God has made him both Lord and Messiah, this Jesus whom you crucified.” He said to the crowd, You did this! Even though no one in that crowd literally drove the nails into Jesus’ flesh. Nor is it likely that any of them were directly part of the Sanhedrin council that condemned Jesus to die, because of the clear contempt with which this same Sanhedrin reacted to Peter and James in Acts 5:33 and 7:54. Some of Peter’s crowd may have been part of the mob in the street that yelled, “Crucify him!” Or perhaps they were oblivious bystanders who refused to stand in the way of this clearly demonic injustice that was occurring. But all of them owned Jesus’ murder as their own sin because they understood their sin collectively as the sin of the “entire house of Israel.” Even though each of them could have said very legitimately by our false individualist standards: How dare you accuse me of a crime I had no part in! Peter would never get an indictment from any grand jury today for the claim that he makes in Acts 2:36. He would get laughed out of the courtroom.

I’m sorry to say that I am part of the crowd that continues to yell, “Crucify him!” because my prejudices and fears are part of a national racist discourse that shaped Darren Wilson with such paranoid fearfulness that he literally thought Michael Brown was a demon. I am no different than the elderly couple who saw John Crawford playing with a BB gun in a store outside of Dayton, Ohio, and presumed the worst, causing the hysteria that resulted in his death. Or the cop who thought 12-year old Tamir Rice was twenty years old and opened fire on him within two seconds of arriving on the scene. As I am cut to the heart by seeing the sin of my people unmasked in these naked injustices, Jesus is saving me from the defensive self-justification by which I damn myself to hell. My salvation happens when I recognize that Jesus can’t breathe and I am the one choking him. I still have much repentance left to work through.

It’s impossible to witness these tragedies without being cut to the heart one way or another. So will you be defensive and angry or will you be contrite and penitent? Will you join the crowd who said to Peter, “What should we do?” Or the crowd who took Stephen out and stoned him to death? Jesus is saying, “I can’t breathe.” Will you be convicted and saved or offended and hardened? 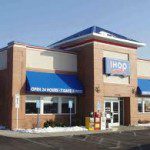 November 28, 2014
A Thanksgiving IHOP run and my complicity in the failure of capitalism
Next Post 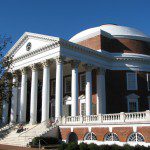 December 6, 2014 Media sensationalism and rape culture at my alma mater UVA (TW: rape culture)
Recent Comments
31 Comments | Leave a Comment
Browse Our Archives
get the latest from
Mercy Not Sacrifice
Sign up for our newsletter
POPULAR AT PATHEOS Progressive Christian
1