Today’s psalm from the Presbyterian daily lectionary was Psalm 46. A couple of lines in this psalm are very popular, like verse 1: “God is our refuge and strength, a very present help in trouble,” or verse 10: “Be still and know that I am God.” But I had never really noticed verse 9 before: “He makes wars cease to the end of the earth; he breaks the bow, and shatters the spear; he burns the shields with fire.” It seems like a fitting verse to contemplate in the wake of the horrific terror attack in Paris as well as the mostly unreported terrorist bombing of the Colorado Springs NAACP office.

I’ve been really disturbed by the number of people on the Internet who seem to relish the terror attack as an opportunity to get in their talking points against Islam. There’s so much ink being spilled in the debate about whether Islam is “to blame” for this terrorism. What do you mean they’re not true Muslims? It’s in the Koran; you’re supposed to kill the infidel. Whenever I see people talking this way, I have to ask what their goal is. Do you want to put them all in prison? Or concentration camps? Do you want to justify terrorism against Muslims because they’re all just terrorists anyway? How many millions of Europeans had to ask whether Judaism inherently produced sleazy money-grubbing merchants before they had created a sufficiently anti-Semitic ground for a Holocaust to happen?

I realize that the Muslim-bashers see themselves as hating political correctness more than they hate actual Muslims. They love ridiculing “liberals” for supposedly “defending” Islam because “those Muslims hate you liberals more than anybody.” I’m not a liberal so I can’t speak for liberals. But I will say that I’m not coming from a place of political correctness when I oppose Muslim-bashing. I believe that living out Jesus’ command to love our enemies means that Christians must speak out against any discourse that makes it easier to justify torture and terrorism against a whole race or religion of people. It doesn’t matter what Islam teaches. It doesn’t matter how many verses Islamophobes find in the Koran that appear to support violence. The reason I cannot engage in Islamophobia as a Christian has nothing to do with what is true or false about Islam. It has to do with whether or not I’m contributing to an environment in which violence against Muslims becomes socially acceptable.

I don’t know if Allah is the same as the God that I worship. What I do know is that my God is the God “makes wars cease to the end of the earth.” He isn’t just breaking physical bows and spears. He is stomping out every excuse we give ourselves for hating and dehumanizing other people. Anytime we promote violence and dehumanization, we are worshiping Satan rather than God, whether you call yourself Christian or Muslim or otherwise. In Hebrew, Satan means “the instigator.” It’s the word we use for the one in our world who’s always trying to start fights and make people hate and fear each other.

Christians who think it’s some sort of exhibition of their righteousness to sharpen rhetorical spears and arrows against other religions and races of people are taking a stance that is diametrically opposed to what Psalm 46:9 says that God is doing in the world. It’s the very next verse where God says, “Be still and know that I am God.” Taken by itself, this verse is comprised of the soft, reassuring words that Steven Curtis Chapman made into a song. But when we read this verse in context, “Be still!” is something that God is shouting at all the agitators and scoffers and lovers of controversy who are sowing the seeds of violence in our world. Another way of saying this is “Shut up!” 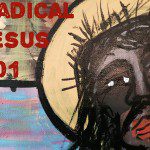 January 14, 2015 Radical Jesus 101: What is God?
Recent Comments
9 Comments | Leave a Comment
"Don't you know that we are dead to sin? Don't you know that we were ..."
WhereAngelsTread Should we preach to uplift or ..."
"Freud would have a field day with a lot of these evangelicals"
Rainbow Warrior If Shakira’s Tongue Causes Your Eye ..."
"I do wonder if it is more of a "first world-ness" or "american-ness" versus Asian ..."
US_Constitution RIP 1-31-2020 Coronavirus, Saturday Night Live, And White ..."
"No, I'm not clowning you. My planet and my humans don't require the church's consent ..."
The Imperial Cult If Shakira’s Tongue Causes Your Eye ..."
Browse Our Archives
Follow Us!