Order. That’s not what it’s about. It’s about Pentecost, the infinite harmony of the Word of God being translated into every possible dialect and identity. There’s a verse that I’ve been meditating upon a lot in the last couple of decades as Christians have our great debate over gender and sexuality: Galatians 3:28. It reads, “There is no longer Jew or Greek, there is no longer slave or free, there is no longer male and female; for all of you are one in Christ Jesus.” There is no longer any other legitimate ordering system for humanity when we are brought into the body of Christ.

The forces that seek to conquer God like the characters in the story of the Tower of Babel never cease to invent divine orders to justify their social dominance. I wrote a term paper in seminary about the era of the Spanish conquest when the divine order was el ordenamiento de mandar y obedecer (the order of command and obedience). Juan Gines de Sepulveda marshaled out scripture read through the lens of St. Thomas Aquinas to prove that the world consisted of two types of people: those who are born to lead and those who are born to serve them. It was the duty of the Spanish to the natives they needed to evangelize to bring them into subservience or else condemn to hell with God’s holy sword.

Sepulveda drew upon the Great Commission as his primary proof-text: “All authority in heaven and on earth has been given to me. Go therefore and make disciples of all nations… teaching them to obey everything I have commanded you” (Matthew 28:18-20). In the same way that the Bible’s prescription of cisgender heteronormativity is self-evident to certain readers today, it was self-evident to Sepulveda that Jesus’ “authority” over heaven and earth made it the duty of conquistadors to plant crosses on the beaches of the New World and conquer it for Jesus. Throughout the centuries of European colonialism, conquest was always justified quite sincerely by the church as the biblically sanctioned means of evangelism and discipleship. Teaching the world to obey Jesus was the mandate for the conquistadors to conquer and enslave the natives of the New World.

But Sepulveda’s opponent Bartolomé de las Casas refused to ignore the truth of Galatians 3:28. He argued that the natives of the new world were no less culturally sophisticated than the Spaniards who wanted to treat them like animals. He made the maddening claim that natives’ human sacrifice was indicative of their deep grasp of the sacred and could not be used as the slam-dunk justification for enslaving and massacring them in the name of God. Las Casas emulated Jesus’ obnoxious habit of standing up for sinners in a vulgar moral relativism where he turned plainly sinful behaviors like a woman’s erotic foot massage in Luke 7 into a deep and beautiful expression of hospitality that put to shame the most meticulous Pharisee he ever ate with. Jesus demolished social taboos and made everyone part of his family, especially those who were outcasts because they were viewed as unclean by everyone else.

Galatians 3:28 was supposed to destroy every us/them category. For Paul to have brought the Gentiles into the church only became unradical when Constantine made Christianity into a Roman religion instead of a Jewish sect. In a conversation with NT Wright last month, we disagreed on whether letting Gentiles into the church was a peculiar one-time event or a paradigmatic representation of how the Spirit always moves. Only people who have forgotten that they’re Gentiles grafted onto the tree of Abraham can turn Christianity into a moral system tailored to justify their insider status. We’re supposed to have a Pentecostal faith that never stops uprooting every possible stumbling block and competitive ordering system that keeps the gospel from being translated into new dialects.

Everything we do to put boundaries on our behavior should serve the purpose of making us more perfectly available to be God’s solidarity with all of humanity. To declare that God is most invested in maintaining any crudely binary divine order short-circuits the mission of tearing down every dividing wall that separates humanity (Ephesians 2:14). If I am following the lead of Paul the apostle of grace who championed the Gentiles, then I’m going to read the Bible with a slant to justify whichever outsider the insiders are defining themselves against in order to legitimate their privilege and power.

Paul would have miserably failed his Hebrew exegesis class in seminary if he turned in any of his epistles as a term paper. He interpreted the Bible with a heavily biased and wildly opportunistic methodology defined by the agenda of widening the kingdom of God and creating a radically different means of ordering humanity: the body of Christ. To say “for all are one in Christ” does not solely mean that everyone is “equally” forgiven or “equally” important. It doesn’t just mean that Christians vaguely have a sense of belonging to the same club. It means that the Spirit’s ordering of the body of Christ supplants every us/them binary that we try to use to order our communities. The degree to which we cling to those binaries is the degree to which we have prevented the body of Christ from being fully manifested.

When we pray that Jesus would make us one body, we are asking to be incorporated into a humanity which is shaped not according to any order other than the harmony of our spiritual gifts brought together. When we make the heterosexual nuclear family God’s perfect divine order, we have displaced the body of Christ. We need families; we need to honor covenants; but a diversity of family shapes does not threaten God’s order. Instead, it cuts off oxygen from an idol that keeps us from being fully incorporated into the body that matters.

So what happens if people are born with complex biology that doesn’t fit together like the jigsaw puzzle in Genesis 2:24 between a man and a woman? Do we tell a man who’s wired differently that he has to marry a woman even if he can’t perform in bed with her which destroys her self-esteem before they end up getting divorced because he keeps on hooking up with other men? Isn’t it actually more sinful for the society around such a man to impose norms moralistically on him that set him up for a hellish, adulterous false marriage than for the church to recognize that he will have a much more stable life with much more energy to serve God if he’s coupled with another man? Are we really going to say that it was more orderly for our communities when being gay was a freakish, secret double-life rather than being a perfectly normal variety of human sexuality?

What about people whose bodies don’t conform to our gender norms? For most of human history when there wasn’t a legitimate identity for gender-nonconforming people, they would have likely fallen to the bottom rung of society, working in prostitution or perhaps the circus. Their suicide rates are tremendously high. Is it really so horrible for this small percentage of people who have complicated anatomies to be allowed a means of thriving? Why is it wrong for them to do whatever they need to do to minimize their distraction from discovering their gifts and finding their niche in Christ’s body?

The test of our holiness is not how many other people we have an easy time condemning but how fervently we devote our lives to standing up for people who are being judged the way that Bartolomé de las Casas even stood up for people who sacrificed other humans to their gods. When Jesus said take up your cross and follow me, he wasn’t telling us to do our daily quiet time and avoid premarital sex. He was calling us to walk out of our safe, comfortable, achievement-oriented lives and join the procession of the world’s crucified.

To be saved is not simply to sign your name on a receipt when God pays himself back with his son’s credit card for your sin. To be saved is to be crucified and resurrected with Christ. A critical part of my crucifixion and resurrection with Christ happens when I surrender my need to be an expert on other peoples’ realities. For example, I need to admit that I don’t understand what in the world it’s like to be queer. If I need to call people sinful who make my conception of Biblical authority and application too complicated, it reveals that I’m using the Bible not as a disciple but as a commentator. So I need to be saved from my temptation to make myself the third-person narrator of other people’s stories by having the courage to say, “I don’t know what it’s like to be you so I can’t tell you what you should take away from the Bible.”

Imagine a church where people actually trust in the blood of Jesus enough to fellowship with people who are engaged in behavior they disapprove but do not try to control. I just visited what is called a “third way” church in Los Angeles. One pastor will marry gay people; the other pastor respectfully declines. Something feels more courageous to me about this messy arrangement than simply walking lock-step with either a conservative or progressive orthodoxy. To me, the evidence of our justifying faith is the degree to which we feel comfortable mistrusting our conclusions and being perpetually confronted by other people’s different ones. People who have to be right and in control have not yet surrendered their lives to a higher power. They may have a specific date when they joined the ranks of the infallible, but they remain unsaved.

I want for the United Methodist Church to be a place where all are one in Christ, where everybody is all in for the one social order that matters, because nobody is trying to live out their holiness by wasting hours of God’s time weighing in on other peoples’ sexualities. It makes no sense hermeneutically to use Paul’s declaration of “no longer male and female” to justify female equality but not upend cisgender heteronormativity itself. That’s the worst kind of artificial moderate compromise. The world really won’t collapse when the church acknowledges that not everyone is a boy or a girl the way most people are. But maybe it will smash another idol that keeps us from fully entering communion with God. I can’t wait for the church to finish reading Galatians 3:28. Two thousand years is a long time to spend on one verse. 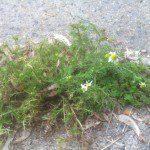 May 17, 2016 Three options for the United Methodist Church moving forward
Recent Comments
0 | Leave a Comment
"Perhaps the next pandemic cyclic will allow you to rethink your observations based on some ..."
Bob Shiloh Intuition and the Garden of Eden
"Good read, here is another interesting interpretation of the tree of knowledge and the fig ..."
Julie Why Does The Knowledge of Good ..."
"I believe the context has nothing to do with God condemning sin within or upon ..."
Joseph Kuzara How does God “condemn sin in ..."
"It's not about pro-/anti- homosexuality. It is neither your place nor mine to judge who ..."
Marc Wagner Can “Social Justice” Christianity Be Anti-Gay?
Browse Our Archives
Related posts from Mercy Not Sacrifice