Why I still believe in hell

My dear friend and podcast-mate Jason Micheli just wrote a very kind review of my book. So I suppose it’s a bit ungracious of me to jump immediately into a quarrel with him over the existence of an eternal hell. He wrote two posts here and here that argue against hell. I still believe in hell and I want to believe in it because I believe in God’s solidarity with the oppressed.

It may be ironic but the strongest argument I’ve found for the existence of hell comes from the atheist radical Frantz Fanon who wrote the seminal text of postcolonialism, The Wretched of the Earth. Fanon argues that there can be no peaceful, gentlemanly transition from colonialism into independence for the colonized because the colonial order will continue to persist in sublimated form unless it is violently eradicated by the colonized. There can be no freedom for the colonized unless the new social order is utterly discontinuous from the old. So a violent transformation is required, like the cosmic battles in John’s vision of Revelation, to allow the emergence of “a new heaven and a new earth” after “the first heaven and the first earth [has] passed away” (Revelation 21:1).

Another atheist Michel Foucault taught me that power dynamics in a society are intricately liturgized into our bodies. He wrote that “politics is the continuation of war by other means.” In other words, if one race of people has enslaved, lynched, or arbitrarily imprisoned another race of people in the past, the power hierarchy created by that violence doesn’t simply evaporate when the violent behavior stops. It is passed down from generation to generation, taking new shapes as it goes not merely on the macrocosmic level but in the daily gestures and bodily movements of every individual person. One generation may act deferentially toward the violent race because of more immediate trauma, while the next generation reacts against this deferential treatment with rage. The 2013 film The Butler is a great example of how a black father and son clash in their vastly different generational responses to white supremacist culture.

Whatever heaven looks like, it cannot involve the persistence of the toxic socializations that are the only identities we’ve ever known on earth. It cannot involve black slaves waiting on their white masters. It cannot involve alcoholic fathers continuing to abuse their wives and children. It cannot involve rape victims wilting because they’re sitting across the heavenly banquet table from their rapists. A radical transformation would be required to create any semblance of true shalom, the peace of everything belonging perfectly.

One of the most important promises of the Bible, especially in its apocalyptic texts like Revelation, is that the oppressors will be overthrown and that their social order will be utterly destroyed. The reason the lake of fire is such an important metaphor is because it represents the annihilation of everything that prevents the emergence of a perfectly just and harmonious universe. The violence of Revelation is God acting in solidarity with those who cry out “Sovereign Lord, holy and true, how long will it be before you judge and avenge our blood on the inhabitants of the earth?” (Revelation 6:10).

The problem is that too many Christians leave God’s solidarity out of the equation. We talk about the afterlife as if it’s an individualized system of merit rather than the obliteration of a toxic world and the establishment of a place where “mourning and crying and pain will be no more” (Revelation 21:4). What makes hell sound absurd is when we describe it as God’s mechanistic punitive response to abstract violations of his honor. Hell is the radical isolation of any existence outside of the eternal communion with God that forms a protective hedge around God’s people. We can only get inside of this protective hedge if we submit ourselves entirely to God’s mercy.

The word for mercy in Hebrew is chesed. The way it’s used throughout the Hebrew Bible reveals that it’s way more than just forgiving somebody when they wrong you. It’s the steadfast love that you have for people in your immediate family. Furthermore, it’s the protection that parents provide for their children. In several places, the “mercy” that the Hebrew psalmists implore of God is for him to slaughter their enemies. It would not be merciful for God to force a severely traumatized victim to spend eternity with her torturer. The torturer would have to be an utterly different person, completely unrecognizable to his victim. Indeed, this is what the apostle Paul claims to happen in our radical transformation when we surrender to Christ: “everything old has passed away; see, everything has become new” (2 Corinthians 5:17).

To me, the question of whether or not we can spend eternity in the safety of God’s communion has to do with whether or not we have allowed ourselves to be radically spiritually transformed so that we can be purged of the toxicity of our sinful world to live eternally in a communion of perfect mercy. So who gets in? Jesus says, “No one comes to the Father except through me” (John 14:6), but he wasn’t answering a question about whether Buddhists, secular humanists, etc. go to heaven. He was reassuring Thomas who had said, “Lord, we do not know where you are going. How can we know the way?” (John 14:5).

There’s a tremendous danger in believing that eternal communion with God is contingent upon some kind of cognitive grasp of Christian doctrine about Jesus. I have a pastor friend whose severely disabled adult daughter has the cognition of a one-year old. He said whatever we believe about heaven, it cannot involve a requirement that would exclude her. I agree. We are living through an epidemic of rationalism in which Christians have substituted believing all the right things about God for the actual heart-surrender that makes us capable of being spiritual purged of toxicity. I suspect that many Buddhists are more surrendered to Christ than Christians whose “faith” is entirely rationalistic.

So if people aren’t surrendered enough to be made safe for eternal communion with God’s people, will they be locked out of heaven forever? Christian universalists point to Revelation 21:25 which says that heaven’s gates “will never be shut.” But it also says in verse 27 that “nothing unclean will enter it, nor anyone who practices abomination or falsehood.” I don’t know what to make of this mystery. I can only say two things: 1) I cling to the promise that no injustice or oppression will be allowed into heaven, so any oppressors who enter will be so utterly discontinuous in their identity that their victims won’t recognize them. 2) If I get to heaven and certain people in my life aren’t there, I will not be able to enjoy communion with God until they have been found and brought into full reconciliation.

June 17, 2016
The Christianity that never stops being crucified
Next Post 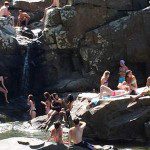 June 21, 2016 How to taste a waterfall
Recent Comments
0 | Leave a Comment
"What's the time limit for that, then?And how do you know this?"
Nixon is Lord Rachel Held Evans and the Democratization ..."
"Thanks so much for reading and sharing!"
Morgan Guyton The Clown (A Poem About God)
"This is rooted in such precious truth of our Lord and who we are in ..."
Anita Grace Brown The Clown (A Poem About God)
"Fantastic blog and devotional. Thanks for sharing."
mike looker Paraklesis: a beautiful word (2 Corinthians ..."
Browse Our Archives
get the latest from
Mercy Not Sacrifice
Sign up for our newsletter
POPULAR AT PATHEOS Progressive Christian
1