It’s no secret that I’ve been a bit of a mess this election season. I’ve spent way too much time on fivethirtyeight.com over the past month. One of the things that I’ve been biting my nails unproductively about is all the speculation about early voting demographics especially in my home state of North Carolina. But then I think about Shannon Dingle, a registered Republican, pro-life, white evangelical woman who lives in North Carolina. She set the Internet on fire three months ago with her announcement that she’s voting for Hillary Clinton. And I wonder how many Shannon Dingles are going to throw the pundits off today and change our political landscape decisively.

Here’s how Dingle summarized her decision:

Because I’m pro-life, I won’t vote for Donald Trump. Instead, I’m planning to vote for Hillary.

To many of my fellow pro-lifers, this seems confusing and inconsistent. I understand that. Hillary firmly believes women should have the right to abortion. In the earliest days of my blogging, I wrote that if I were to be a single issue voter, abortion would be that issue for me.

Well, nothing in my stance toward abortion. I’m still opposed to it. But since Roe v. Wade, most Republicans have talked a lot about abortion while doing little to make meaningful change in that area of policy. Furthermore, they’ve opposed or even stalled measures that could prevent abortions by targeting the underlying causes, like poverty, education, lack of access to healthcare, and supports for single parent and low-income families. In fact, I suspect these reasons contribute to why abortion rates rose under Reagan, rose under the first Bush, dropped under Clinton, held steady under the second Bush, and have been dropping under Obama. As such, I’m not sure we can hold that voting Republican is the best thing for abortion rates in this country.

The one thing that’s really shifted in this election unlike anything I’ve seen previously is the number of pro-life white evangelicals (mostly women) who are arguing for a holistic approach to ending abortion rather than focusing exclusively on nominating anti-abortion Supreme Court justices which has changed nothing for the past 44 years (non-white evangelicals have always had a much more nuanced approach to politics). If this ideological wedge is shattered with this election, it will have huge implications for the future of partisan politics in our country.

But the most important thing for me is the liberation that this ideological wrecking ball could bring to Christian evangelism. The past three decades of culture war have been a disaster for Christians’ ability to share the love of Christ with our neighbors. Millions of people who might otherwise be open to the gospel have been alienated by the religious right. It will probably take at least a generation after the fall of the religious right before their stumbling blocks have been removed from our ideological landscape.

Will this be the election when white evangelical women finally save white evangelical men from our Trumpish egos? Will there be actual repentance among the leaders who realize they contributed to the toxic culture that gave us Trump? Will the evangelical megachurch electoral juggernaut finally be shipwrecked decisively enough that business as usual is no longer possible? Will white men be despondent enough to ask their wives for help figuring out how to move forward?

I’m not saying white evangelical women are more important than anybody else. The two most important political movements of our time are the Sacred Stone Camp in Standing Rock, North Dakota and Black Lives Matter. But insofar as white evangelical women are able to overthrow the religious right, it will make a big difference for all of us who are fighting to make our country a just society. And that’s why I’m grateful for Shannon Dingle and hope there are many others like her.

November 3, 2016
If Donald Trump wins, I will blame toxic Christianity and here's why
Next Post 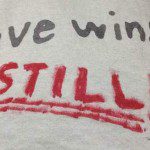 November 9, 2016 Love wins (still)
Recent Comments
0 | Leave a Comment
"That's beautiful."
Timothy Swanson My Light Blue Pink Messiah (a ..."
"As long as you believe in some uber demon you will always be fearful of ..."
JD Satan As The Virus of Enmity
"Mrs. Smith? Sorry, can you tell me what that means please? I'm not much of ..."
Malissa “All People Are Holy”: The Theology ..."
"Well I know a Palestinian priest who had his home bulldozed.Why do you think there ..."
Bones Iran, Mike Pompeo, and the Total ..."
Browse Our Archives
get the latest from
Mercy Not Sacrifice
Sign up for our newsletter
POPULAR AT PATHEOS Progressive Christian
1