A visit to the ICE office 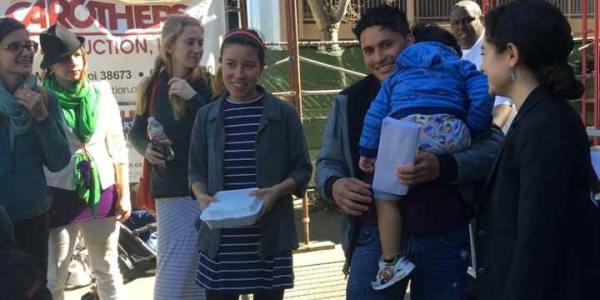 This week, I got to do church in a way that I hadn’t experienced before. After my morning men’s group meeting, I attended our church’s sanctuary committee meeting, which is exploring ways to support and protect undocumented immigrants in a political climate defined by hatred against them. Attending the meeting were a local labor organizer named Chloe and a Honduran immigrant named Jose who had a very scary appointment at the ICE immigration office where he was facing likely arrest and deportation. She invited us to accompany Jose to his hearing.

I had planned on spending my Tuesday morning tabling at Loyola, but I couldn’t bear watching Jose holding his toddler son, knowing that he would probably be separated from him for a long time very soon. When I learned that his son’s name was Isaiah just like my son, I lost it. It really struck me how insulated and privileged my life has been that this was really the first time I had seen this kind of moment. So many poor people of color grow up with at least one of their parents in prison, usually for minor drug offenses that white suburbanites never get prosecuted for.

Jose had fled Honduras with his family after he was attacked by a man with a machete. I asked Chloe why he hadn’t applied for asylum. She explained that asylum is only granted if you’re part of a religious or ethnic identity that’s been persecuted. If you’re simply someone who is being threatened by the local drug cartel, you’re out of luck.

So Jose and his family crossed the border. Jose got caught and he was deported. He came back across the border to be with his family, and he was arrested and sentenced to prison for doing that. He shared that his faith in God was the only thing that kept him going when he was in prison. Through some kind of miracle, an immigrant advocacy group was able to get him released from prison. But the stipulation of his release was that he had to report back to the ICE office every few months.

Jose’s arrest and conviction of a misdemeanor put him in the category of undocumented immigrants who are the highest priority for deportation, even though his misdemeanor was simply for crossing the border to be with his family. We were told that Jose would likely be arrested and deported at his hearing, but having a crowd to accompany him would increase his chances of release.

So we ended up with a crowd of 19 people. We drove to the downtown Hyatt. The ICE office is located in a building that’s connected to the Hyatt by a walkway. It was really odd to see a government office in a private commercial space like that.

When we got to the hallway outside the ICE office, they locked the doors since we had such a large crowd. Nobody spoke to us for a while. Then we saw more security guards get off the elevator and finally a police officer. They ordered us to leave the premises. We told them that we were part of Jose’s church and we were very concerned about his safety. In the end, we were able to negotiate his keeping a lawyer and a translator and a pastor with him.

When he finally went into the office, they told him he had to leave and come back by himself in an hour. At that point, I had to leave to get back to campus. I don’t know how it happened but somehow two hours later, he was allowed to go free at least for the next few months.

The whole experience made me think about the nature of Jesus’ commandment to love our neighbor. Our whole battle over immigration is a fight for the right to put limits on Jesus’ command. The basis for criminalizing a man who flees deadly violence in his home country is that he’s not supposed to be our problem. Our borders are what makes the United States the most stable, secure nation in the world. We have our problems, but as long as we keep the refugees out, our problems will be manageable.

The Panama Canal is made up of a series of locks that hold water at different levels since the water surface in the middle of Panama’s isthmus is 85 feet above sea level. The United States is like the artificially elevated water at the center of the Panama Canal. The reason people are scurrying to get to our southern border is because there is no economic equilibrium in our hemisphere. If the borders were opened to migrant workers the way they are to consumer goods, then our hemisphere would equilibrize economically and the need to migrate would be eliminated. This is what happened within the European Union where people of each country can travel freely throughout Europe to find work (though not from Syria or other Middle Eastern and African countries).

Insofar as Christians have influence on our country’s immigration policy, we need to look at the story where Jesus explained who is the neighbor you’re supposed to love. Government leaders need to weigh a lot of pragmatic considerations in devising our immigration policy. But their cost/benefit analysis would be very different if the millions of Christians who are chanting, “Build that wall!” were actually obedient to Jesus’ command to love their neighbors. Whatever our government does, our churches need to obey Jesus and stand with the refugees in our communities. 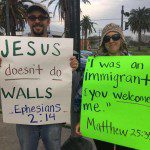 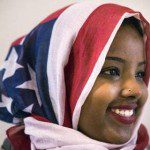 February 7, 2017 A Muslim immigrant who loves our country more than I do
Recent Comments
0 | Leave a Comment
Browse Our Archives
Related posts from Mercy Not Sacrifice