What If This Is the New Church? 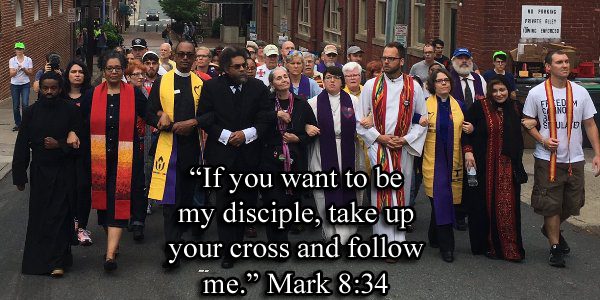 I’ve been thinking about what I would preach today if I were preaching. And I keep on seeing this image of Cornel West and other clergy marching in Charlottesville today, many of them queer or female clergy whose legitimacy would be called into question by many Christians. And the phrase that came into my head is this is what the new church looks like. It doesn’t matter that church hasn’t looked like this since Constantine made church the same thing as empire. This is what church actually looks like because the church is ekklesia, those who are “called out” of the world to follow Jesus into the streets.

When Jesus told the crowds in Galilee to take up their crosses, the cross wasn’t an abstract, spiritualized symbol of suburban piety or a marker to legitimize Christian imperial conquest. It was a very real, physical act of state terrorism by the Roman Empire. For a first-century Galilean, taking up your cross meant that you were going to die a terrible death that day. That’s why Jesus says in the next verse, “For those who want to save their life will lose it, and those who lose their life for my sake, and for the sake of the gospel, will save it.” This is not about keeping a daily quiet time and avoiding R-rated movies. Jesus is giving a Braveheart speech. He’s saying you will lose your life quite literally if you become his disciple but that’s how your life will be saved.

In any case, when the evangelicals who raised me came upon the word “save” in this verse, they would say oh Jesus is talking about heaven and hell. What he’s really saying is that you’ll go to heaven after you die if you “lose your life” (i.e. ditch your old non-Christian friends and avoid your former life of sex, drugs, and cuss words) when you accept Jesus as your “personal Lord and savior.” I love that phrase “personal Lord and savior,” because it sounds like a capitalist accessory, which indeed it is, just like the personal afterlife insurance that doesn’t actually look like anything the Bible calls salvation.

But I think the evangelicals need to submit to the plain meaning of scripture here. What Jesus was calling the crowd to do was to risk their lives for his movement. And many of them really did lose their lives. Just like a young woman lost her life yesterday in Charlottesville when a white terrorist ran her over with his car. I have no idea what her faith background was. What I know is that she was standing exactly where Christians are supposed to be right now: on the front lines to face down white supremacist terrorism.

Yesterday I was proud of my Virginia United Methodist colleagues. There was a video on the Internet showing people I know and love standing in a line singing “This little light of mine” in between the anti-racist demonstrators and a group of heavily armed fascist paramilitaries. Not everyone linking arms together in that video shares my views on every social issue but they put their bodies on the line to protect people and stand up for Jesus.

My hope for our campus ministry NOLA Wesley is that God would use our space to create Christians who are inwardly solid and outwardly focused enough to be the healers in the streets in the coming months and years of our nation’s battle with fascism. It is absolutely critical that we root ourselves deeply in the kingdom of God and practice spiritual disciplines that sanctify our bodies and spirits in order to have the strength and composure to march with Jesus. When you fight for social justice without being anchored in a community of social holiness, burnout and bitter infighting are inevitable. So church is not just marching; church is getting prayed up so that you can keep the love when you go marching.

What if that street in Charlottesville is what the new church is actually going to look like as the 21st century develops? What if the day comes when there will be more Christians in the street fighting for justice than there are in those suburban self-congratulatory praise stadiums? What if the millions of people in our country who have been alienated from Christianity for absolutely valid reasons through decades of toxic culture war are drawn back into a Christianity that actually walks and talks like Jesus? What if white supremacist Christianity is finally on the other side of its peak?

We now live in the age of Traci Blackmon and Robyn Henderson-Espinoza and Broderick Greer and Bree Newsome. They are our leaders now. They are the ones I want my students to read and know about. More blood will be shed. More hate will be poured out on God’s people. Satan will do everything he can to resist the true church. But he can’t stop the new thing God is doing. Because God can raise people from the dead.

“See I am doing a new thing! Now it springs up; do you not perceive it? I am making a way in the wilderness and streams in the wasteland” Isaiah 43:19.

At the beginning of the summer, our campus ministry NOLA Wesley had only $398 in monthly Patreon pledges. We have now reached $875. Please help us get to $1000 before the school year starts so we can focus on loving our campus. 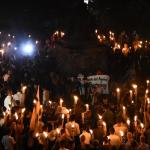 August 12, 2017
How Satan Wins in Charlottesville and Elsewhere
Next Post 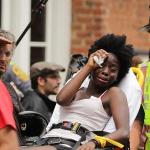 August 15, 2017 Charlottesville: a first-hand account of racist violence
Recent Comments
0 | Leave a Comment
"Read Joseph Campbell's book, The Hero With A Thousand Faces, and good luck!"
Enlightened | Morgan Guyton
"You may be over-thinking things a bit. It appears you now believe in nothing; better ..."
Bob Shiloh | Morgan Guyton
"The times, they are a'changin'! Thank you for sharing your insights from your walk in ..."
Zeigler John | Morgan Guyton
"There is a lot here, but just two comments to think about. First - you've ..."
Robert Hunt | Morgan Guyton
Browse Our Archives
get the latest updates from
Mercy Not Sacrifice
and the Patheos
Progressive Christian
Channel
POPULAR AT PATHEOS Progressive Christian
1

'We come in last in the human race'
Find whoever it is that is being told they don't matter and...
view all Progressive Christian blogs
What Are Your Thoughts?leave a comment
Copyright 2008-2021, Patheos. All rights reserved.