What Would The Israelite Prophet Isaiah Say About Trump’s Jerusalem Decree?

I have apparently siloed myself from the evangelical end-timers enough not to see the triumphalist exultation that my friends are reporting over the past few days on their Facebook feeds in the wake of Donald Trump’s declaration of an undivided Jerusalem as the capital of Israel. Some of the end-timers are apparently very open about the way that they see these events as the fulfillment of biblical prophecy that will unleash a final Armageddon conflict that will result in Jesus’ return.

To someone who doesn’t know any of the details about the complex negotiations within the Israel/Palestine conflict, I imagine that Trump’s Jerusalem edict just seems like another “straight-shooting” correction of week-kneed political correctness in which the US has treated Tel Aviv like the capital for some strange reason because we always have to tiptoe around pissing off those crazy Muslims. Why shouldn’t Jerusalem be the capital of Israel? Hasn’t Jerusalem always been the capital of Israel? What are these technocrat liberal diplomats all up in arms about ? What are the crazy Muslims mad about?

For those of you who aren’t here to troll but are wondering why the questions I just listed off are taboo, here’s the issue as I understand it in a nutshell. Jerusalem is a sacred city for both Muslims and Jews. East Jerusalem has been a predominantly Arab community for a long time. When Israel was established in 1947, East Jerusalem was not within Israel’s borders. During the Six Days War of 1967, East Jerusalem was conquered by Israeli forces along with the West Bank, Gaza Strip, Golan Heights, and the Sinai Peninsula. It retreated from Sinai but not from the other occupied territories which it continues to hold in defiance of multiple UN Security Council resolutions.

The United Nations established after World War II that nations cannot legitimately annex territory conquered in times of war. When hostilities cease, the land is supposed to be returned. That principle of international law has been accepted by the global community (and selectively enforced according to the whims of the imperial powers). It’s the reason the US invaded Iraq after Iraq invaded Kuwait in 1991. It’s the reason that we have sanctions against Russia for annexing the Crimean peninsula from Ukraine. To declare Jerusalem the capital of Israel is to validate the permanent annexation of East Jerusalem by Israel and thus destroy the international precedent against the annexation of territory conquered in war.

But as a Christian theologian, my primary area of interest is not international law but what the Bible has to say about the theological entity it calls Israel (which is different than the modern secular nation-state of Israel). Two things distinguish how ancient biblical Israel describes itself in its sacred texts: 1) It is ruthlessly honest and sharply critical about the shortcomings of its political leaders in a way that is utterly distinct from every contemporary ancient near eastern people-group I’ve ever encountered (in other words, the complete opposite of how modern secular Israel’s supporters silence its critics through charges of “anti-semitism”); 2) It ties Israel’s legitimacy to its capacity to bless all the nations of the Earth. Nowhere is this second point more pronounced than in the prophet Isaiah.

Isaiah is one of the primary texts that Christians read during Advent. Because Isaiah writes about the impossible hope that we see as the gospel and mission of our messiah Jesus Christ. Isaiah declares God’s future to be utterly unimaginable to us. It’s easy for us to imagine and even relish a future in which all of our enemies will be obliterated in fire and brimstone. But to imagine the complete disentangling of our sin and reconciliation of humanity is the kind of ridiculousness that only a prophet could engage in.

One of my favorite Isaiah prophecies is Isaiah 2, when he talks about what the true purpose of Zion is:

In the last days
the mountain of the Lord’s temple will be established
as the highest of the mountains;
it will be exalted above the hills,
and all nations will stream to it.

Many peoples will come and say,
“Come, let us go up to the mountain of the Lord,
to the temple of the God of Jacob.
He will teach us his ways,
so that we may walk in his paths.”

The law will go out from Zion,
the word of the Lord from Jerusalem.
He will judge between the nations
and will settle disputes for many peoples.

They will beat their swords into plowshares
and their spears into pruning hooks.
Nation will not take up sword against nation,
nor will they train for war anymore.

Jerusalem is the mountain of the Lord’s temple. The name Jerusalem literally means “city of peace.” Is there any more agonizing irony than that in our world today? I can totally understand how Jewish Israelis who lived through the suicide bombings of the second intifada would say, “Yes. This is exactly what we want Jerusalem to be for all the nations of the world. But we can’t do it if people are running around blowing themselves up so we had to build a wall and checkpoints.”

A few years ago, I tried to build a friendship with a very zealously Zionist rabbi whom I ultimately had to block on social media. He confronted me about the way that nonviolent Christians expect Israelis to live out our nonviolence for us. It’s true. I don’t have a leg to stand on expecting Israeli Jews to shut down all their checkpoints, tear down their apartheid wall, pound their F-15’s into scrap metal, and trust that somehow whatever happens after that will turn out okay.

At the same time, colonialism is unjust and the violence it provokes is a mirror reflection of the violence it inflicts. The Israeli Palestinian conflict has been characterized by an attempt to legitimize terrorist violence against Palestinians by making it official. If a “smart-bomb” from an F-15 flown by a pilot wearing an official uniform kills civilians, it’s not terrorism; the civilians are “human shields” for the terrorists who don’t wear official uniforms so they’re impossible to distinguish from the civilian population. If a crude Gazan rocket makes a small crater in a field next to an Israeli neighborhood whose inhabitants have to rush to a bomb shelter, that’s what terrorism is.

How does the mountain of the Lord’s temple get established? Is it through colonial terrorism? The Bible doesn’t help me very much here, because if we read the book of Joshua, the answer is yes. What would Isaiah say about Joshua? Honestly I don’t want to know because I’m sure that he was as instinctively loyal to his tribal legacy as any other person in that day and time would be.

Still the Zion Isaiah describes doesn’t have checkpoints. It’s a place where all the nations freely stream into. Those who worship the God of Jacob are its caretakers, but it’s an international city, a place of prayer and teaching for all the nations. Five years ago, I had a very strange and powerful spiritual encounter. I think Gaza was being bombarded at the time. It was in the midst of a presidential race where all the end-timers were saying that Obama was the anti-Christ. In that context, God seemed to share a vision with me of a temple where Jews, Christians, and Muslims worshiped together and in that space greeted Jesus’ return as the messiah of all the children of Abraham.

It’s a naive, facile vision that might express my own presumptuous assimilationist colonialism as a Christian. But it’s the sort of interfaith space that was envisioned by the designers of the ill-fated Cordoba House in lower Manhattan, derisively referred to as the “Ground Zero Mosque.” The right-wing islamophobes managed to kill the project. It would have been a temple where Jews, Christians, and Muslims could each worship according to our respective traditions, not collapsing them into the watered-down, hollowed out “universal” religion that too many Western liberals dream of.

I just read Chaim Potok’s The Chosen during Thanksgiving. The hasidic Jewish religion he describes is so beautiful that I was powerfully evangelized by it. I would never want the richness of that tradition to get swallowed and assimilated into my tradition where we claim that the messiah has in fact already come. I would never want for every hasidic Jew to become a Christian even though I think Christianity is the best story of God because I honestly don’t think God is fully glorified without hasidic Judaism. As a progressive evangelical Christian whose views of evangelism are continually evolving, I don’t know how to talk about religious pluralism, but I’m convinced that the genocidal colonial hegemony of European Christendom that continues to be reflected in Christian evangelism is almost a great enough abomination as to completely invalidate the gospel.

I don’t know anything about the geography of the Temple Mount and the Al-Aqsa Mosque that’s built there. But wouldn’t it be incredible if one day there were enough peace and trust between Jews, Christians, and Muslims that all three faiths could be practiced in that sacred space? Could that ever happen in a way that wasn’t forced by colonial violence? One thing I feel confident saying is that any attempt to rebuild the Jewish temple that was destroyed by the Roman Empire would be complete blasphemy without the impossible peace that God demands through his prophet Isaiah. I would be afraid of the physical wrath that would be poured out if such a blasphemy were attempted. But if somehow the impossible peace were to come, that would be the holy ground on which the temple of ancient Israel could be rebuilt and a place where I wouldn’t be surprised to see the Son of Man descending from the clouds. 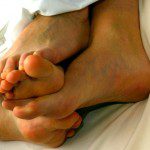 November 30, 2017
Sex As Grace (Reflecting On A Discussion With College Men)
Next Post

December 14, 2017 Grace, Truth, and Eucharist in an Age of Disposable People
Recent Comments
0 | Leave a Comment
Browse Our Archives
get the latest from
Mercy Not Sacrifice
Sign up for our newsletter
POPULAR AT PATHEOS Progressive Christian
1