“Go and find out what this means: ‘I desire mercy not sacrifice.'” Matthew 9:13

This is what Jesus tells the religious authorities when they criticize him for partying with sinners. I would say that this verse is the most important verse in the Bible for Christians and a summary of the gospel that we need to hear every day. Everything that God teaches us and commands of us is for the sake of mercy. Christian discipleship is this: receiving God’s mercy so that we can become God’s mercy for the world.

Now it’s important to tap into the biblical meaning of the word mercy, because the American pop-evangelical church has turned Christian salvation into a tacky afterlife insurance product. Mercy is not reducible to being forgiven for doing something wrong. That can be part of it. But mercy is also rescuing someone who is helpless and being crushed by their enemies, whether or not they did anything wrong.

In the Bible, the Hebrew word hesed is usually used in this sense of pleading with God to show the Israelites “mercy” by rescuing them from their enemies. What hesed literally means is kinship love or what the King James Bible translates as “loving-kindness.” Hesed is the fierce, protective love that parents have for their children. To receive hesed from someone means that you are treated like family.

So when God shows mercy to sinners, it’s not so much that he’s deciding not to collect payment on a debt that we owe him. It’s more that he’s rescuing us from an enemy who is crushing us. God rescues us by becoming the sacrifice for our sins through Jesus’ crucifixion that proves he’s not holding our sin over us (Romans 5:8). It’s not that God needs Jesus’ blood sacrifice in order to forgive us; it’s that we need someone to take the weight of our sin in order to receive a forgiveness that has weight.

When we aren’t convinced that we live under the mercy of God, we inevitably try to earn God’s favor and the world’s favor through sacrifice. This is what I call self-justification. I would say that a life of always trying to prove yourself right is actually what hell is.

Many self-professed Christians try to justify themselves through sacrifice. In our ideological age of social media, this “sacrifice” usually isn’t very costly. It’s simply the “sacrifice” of holding counter-cultural beliefs. Conservatives “sacrifice” by taking a stand against gay people. Progressives “sacrifice” by virtue signaling with the most radical stances about all the important causes of the day. Moderates “sacrifice” by rising above the fray and heaping scorn on both sides.

Interestingly, the true sacrifices usually happen when people don’t think of themselves as making a sacrifice because they are moved by mercy. I think about Jesus’ parable of the Good Samaritan. The reason the Samaritan sacrificed his time and money to help the wounded traveler was not because he was performing a religious duty; it was because he was “moved with pity” (Luke 10:33).

One of the most important books I’ve ever read is a long reflection on the Samaritan story by liberation theology Jon Sobrino called El Principio Misericordia. Sobrino calls attention to the way that the Samaritan’s actions were motivated by his heart. It was not that he had submitted himself through rigid sacrifice to stringent moral precepts. Rather, he was able to see the face of the other because he was looking through the eyes of mercy.

The Samaritan story is Jesus’ answer to the question: “What must I do to inherit eternal life?” (Luke 10:25). He doesn’t say obey your Bible, have a daily quiet time with God, avoid premarital sex, and vote Republican. He says be merciful. Of course, it could be tempting based on this story to think that church should be nothing more than a community service organization. But that would be missing the point also.

If we help other people out of self-justifying sacrifice, that isn’t mercy; that’s self-righteous paternalism and it can do more damage than good. That’s why we need to receive God’s mercy in order to become God’s mercy. When you show mercy as one who lives under mercy, then you will do so in a way that cherishes the dignity of the person who is receiving that mercy, because you know that the mercy has its source in God rather than you.

So accept God’s mercy and become God’s mercy. That’s the whole thing. Stay tuned in for the rest of my series Good Biblical Words. 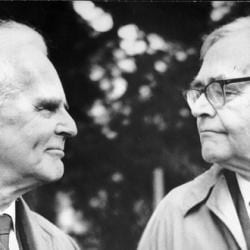 Progressive Christian
Nein! A Response to Jason Micheli On Sanctification...
Mercy Not Sacrifice