If Shakira’s Tongue Causes Your Eye To Sin, Cut Your Eyeball Out

If Shakira’s Tongue Causes Your Eye To Sin, Cut Your Eyeball Out February 7, 2020 Morgan Guyton

At one point in the show, Shakira, who has Lebanese and Colombian heritage, ululated into the microphone, attempting what’s called a zaghrouta. It’s an Arab expression of defiant joy. It happens at both weddings and funerals, especially funerals of people who have been martyred by an enemy, like Palestinian kids killed by Israeli snipers in Gaza protests. It’s kind of like the way Muslims chant “God is good” while they’re weeping for their dead. It’s a way of saying you will not silence us. The female protesters in Sudan ululate in the streets when they’re protesting. I imagine it would be very intimidating to hear thousands of women doing it at the same time.

But what a perfect metaphor for the entire Super Bowl halftime show conversation! If men watch enough videos where women sticking their tongues out means only one thing, then when a woman sticks her tongue out, no matter what cultural differences exist, it can only have one meaning. As I’ve watched my social media over the past five days, I have consistently seen white people scandalized by what one of my fellow Patheos Progressive Christian Channel bloggers called the “pornographic” halftime show, while Latinx people posted about the pride they felt seeing their culture being represented in such a high profile setting.

It was a wide variety of Latinx people, not just activists or hard-core feminists, who responded in this way. Even ones who were relatively socially conservative and older. Most of them weren’t even talking about Shakira or Jennifer Lopez’s bodies. They were talking about other aspects of the show, like the Puerto Rican flag, the kids in cages who sang about being born in America, the fact that a lot of the words were in Spanish, etc. In other words, white and Latinx viewers didn’t just come away with two different interpretations of the same image; they saw entirely different content.

I wonder how many six year old Arab girls (who have never seen the internet videos that older white men like to watch) said, “Mommy, look, she’s doing it! She’s doing what we do sometimes.” Is it possible that children watching the halftime show were drawn into noticing something other than crotches? I personally think there are valid complaints to be made about the cinematography, but what if people who can only see crotches when there’s a lot else going on are primarily dealing with an internal problem?

One very basic thing I have learned as a white man is that I have a tendency to universalize my perspective. That is to say, I presume that whatever I notice is exactly what everybody else is noticing and whatever I see is what the person I’m watching is trying to show me. For a long time, I presumed that women wore short skirts or booty shorts for one reason: to seduce men. Is that true sometimes? Sure. But guess what? Women often make fashion decisions for reasons that have nothing to do with their impact on men.

I can’t remember exactly which conversation made this finally click for me. It was way more recent than I’m proud to admit. I think it was overhearing something about yoga pants being so comfortable and easy to slip into when you’re cold and you’re running late for class. I used to get so bent of shape about yoga pants. I never said anything aloud of course, because that would be sexist. But I was internally scandalized and tormented by the feelings that came up about bodies I wasn’t supposed to be looking at.

Then one day, yoga pants just stopped bothering me. They just became a normal, un-erotic article of clothing, just like leotards and sports bras are normal articles of clothing with practical purposes. Yes, it’s true that we live in a culture that’s overly eroticized because capitalism uses sex for marketing more than anything else. But it’s also true that taboo is what turns sex into an object of unhealthy obsession rather than authentic desire. That’s the paradox. The outrage against allegedly suggestive clothing or dance moves is what makes the clothing or dance moves suggestive. The terrifying secrecy of watching the internet porn videos is what makes them so tantalizing.

It may be bad parenting, but I have conversations with my ten and thirteen year old sons about sex at least twice a week. I usually don’t initiate these conversations, but one of my sons will say something that sounds like an innuendo and the other one will call it out and then the whole car roars with horrified laughter. If they want to know a fact, then I’ll tell them the truth in a dispassionate, matter of fact way. My younger son likes to be mischievous, while my older son likes to be flamboyantly appalled.

They don’t want to have sex. They think it’s gross and utterly weird. Which is absolutely appropriate for their age. So rather than scold and shame them for talking about sex, I just try to laugh with them in their reality where it’s gross and weird. My gamble is that it will better help them develop into healthy sexual beings to make nothing taboo to discuss rather than reacting strongly every time they say something that most adults would consider inappropriate. I’m also hoping they’ll one day tell me things they won’t tell other adults when they’re in a season of life where they need to be able to do that.

My sons weren’t watching the halftime show, but if they were, I doubt very seriously they would have primarily understood the content as sexual. They haven’t watched the online videos that so many older men watch, though they’ve heard about them and are perplexed by why anyone would want to see that. They enjoy pseudo-twerking ironically when they win at video games. Sometimes it looks like a sexual motion but I don’t scold them for it; I just react with comic melodrama like they do. I’ll be curious to see how they develop differently since they’re (somewhat) growing up outside of the white evangelical purity culture that catapulted me into all sorts of obsession and dysfunction around sex. Will they even get into porn when they’re older or will it be uninteresting to them because they don’t live among people who desperately, obsessively terrify themselves about it?

It’s interesting because I’ve been in an evangelical online counseling program for the past three years. But it’s an evangelical counseling program that was founded by the guy who wrote the book Boundaries and has spent his career addressing toxic co-dependency, passive aggressive repressed anger, and other unhealthy tendencies that have metastasized throughout evangelical church culture. So we had a presentation last night in our counseling program on “human sexuality.” And it was one of the healthiest articulations of sexuality I’ve heard from people who maintain a traditionalist view.

The two most prominent takeaways from the presentation were that sexual desire itself is not evil, and if you repress your sexuality, it always “comes out sideways.” One of the few places where I like the King James Version of the Bible is in its translation of Matthew 5:29, where Jesus says, “If thy right eye offend thee, pluck it out,and cast it from thee.” A lot of evangelicals point to this verse to show how demanding and hard-core Jesus is. But none of them have ever actually obeyed Jesus’ command in this verse, though there is a Joyce Carroll Oates novel Son of the Morning that’s premised upon a Pentecostal boy preacher who takes Jesus at his word and becomes a cyclops.

I can’t prove anything, but I think Jesus is clowning us when he says things like this. He constantly battled with religious puritans who took themselves way too seriously. One thing is for sure. Jesus would not tolerate men making their lust the responsibility of the women they’re ogling. I think a version of Matthew 5:29 that could work today is if you’re so lust-filled that crotch shots on the TV make you need to pull your thing out and start stroking, you can always turn the TV off. That’s way less permanent and more sterile than cutting your eyeball out anyway.

February 1, 2020
Resisting Harm Is What Holiness Is For
Next Post 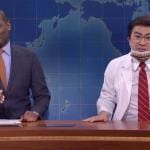 February 8, 2020 Coronavirus, Saturday Night Live, And White Hysteria
Recent Comments
0 | Leave a Comment
"if the christian family really wants to do DD right, then it is the man ..."
esbee The Christian wife-spanking movement [TW]
"Read Joseph Campbell's book, The Hero With A Thousand Faces, and good luck!"
Enlightened | Morgan Guyton
"You may be over-thinking things a bit. It appears you now believe in nothing; better ..."
Bob Shiloh | Morgan Guyton
"The times, they are a'changin'! Thank you for sharing your insights from your walk in ..."
Zeigler John | Morgan Guyton
Browse Our Archives
get the latest updates from
Mercy Not Sacrifice
and the Patheos
Progressive Christian
Channel
POPULAR AT PATHEOS Progressive Christian
1