The Book (A Poem About Hegemony)

This may not be the right question but
Are you a character in a book
Or a living, breathing fire who
Speaks to every prophet even when

We use words like shakti and sattva
Instead of cross and resurrection?
What happens when some words that
Are God-breathed give birth to poetry

That cannot be written if other words
That are God-breathed are presumed to
Seal the door shut? What does it mean for
None to come to the Father but through you?

Calling words God-breathed) so why is it wrong
To say that the Trinity is most fundamentally
A mother who gives birth to a new humanity,
Or perhaps the Spirit is the mother who births

The Son’s seed; or perhaps Mary is the fourth
Member of the Trinity which is how every
Indigenous tribe has made baptism work
Faced by the blasphemed cross that became

An imperial sword; they saw that Pachamama
Was another face of the same mother and she
Appeared to them to help them understand
That white men with swords do not represent

God, and furthermore if you have other sheep
Who know your name, then why can’t we say
The wild marriage of Shiva and Kali is yet
Another way to understand the balance

The resurrected world that has never stopped

Being born? And what about Dionysus whose
Mother Hecate was cast out of Olympus and
Derided as a witch despite the fact that mothers
Who make potions to heal their children are

Duty to the one who says I am the way and the
Truth and the life? Yes, it’s true that Dionysus is
Also the Bacchus who presides over spring
Break gone wild and Mardi Gras videos that

On the hillsides and ripped off the head of a prude
Ruler who hid in the bushes to watch naked
Nymphs playing lyres: how many Bible teachers
Use Incognito on their iPhones nightly and

Commit themselves all the more stringently

Before you to say, “Have mercy on me, a sinner”?
How many books didn’t make the cut to be included
In the book whose compilation was presided over
By an emperor? And yes, Constantine is a saint in the

Clearly and obviously derived from rhetorical gestures in
The Roman Senate, not because touching a thumb
To a ring finger has anything to do with chakras pulsing
Through consciousness as those fools who say om believe.

The book says we are all icons; it says that light and wind
Cannot be kept inside a box, which are just poetic flourishes
To those who read the book looking to build a tower all
The way to heaven by exegeting it with first century eyes.

Tongues of fire to give us language that cannot be written

Like the name of God which cannot be spoken, only
Breathed? The East corrects the West with a God too
Ineffable to be more than infinite void like light that
Cannot be seized and wind that blows where it chooses.

The Jews correct the Christians by saying that Torah
Is never resolved into a final statement which means the
Messiah is always on his way and Zion is not a land that
Can be divided through checkpoints and separation walls.

I can be your disciple, Jesus, if you are the shaman who
Gives rap’e to some and jopo to others, each according
To their need and gift and call; but if faith is just a word
For reciting the catechism that says all the right things

As an admission price rather than a trust that retains
Perpetually unresolved questions while it journeys
Deeper into the whirlwind of God, then I am the enemy;
Still I hope to be one of your seven trumpets. 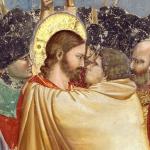 Jesus on the mainline
slacktivist
Related posts from Mercy Not Sacrifice