On Getting Banned From A White Queer Christian Discord For Attacking Augustine December 5, 2021 Morgan Guyton

Well I just got banned from a white queer Christian discord space for attacking Augustine’s doctrine of original sin, which is such a bizarre thing to me that I needed to blog about it. I also got my feelings hurt a little bit. I think it was mostly because I was behaving like an unmasked autistic who thinks and types at a thousand miles an hour. Online text-based conversation space is my kryptonite because I naturally write really long posts that overwhelm other people to read since they come across as “angry” and “unhinged” just because they’re voluminous.

In any case, here’s the substance of what I was trying to say. Augustine was a Platonist who believed that a well-ordered human soul is one in which reason is in charge of the passions and the appetites. Sexual desire, specifically the male boner, does not obey reason. Augustine reasoned that because he experienced physical sexual arousal against his rational will that this was part of the innate physiological curse of original sin. So the now-ubiquitous western Christian idea that human nature is “fallen” and “corrupted” irreparably apart from God’s miraculous gracious intervention began with Augustine’s hangups over his boners.

If you want to google it, there are actually multiple book-length feminist critiques of Augustine that comb through his work and trace the indirect references he makes to his boners throughout it. In City of God (I think?), he literally describes sin as a “contemptible swelling” that “rises up” in the flesh. Maybe it’s an exaggeration to say that Augustine’s boner is the reason that Western colonial genocide happened, but it made a contribution. If human nature is innately corrupt, then people who have met Jesus are categorically distinct enough from unsaved “heathen savages” that enslaving and conquering the “savages” becomes theologically justifiable (and yes, I’ve read 16th century primary source texts in which Augustinian Spanish theologians make this argument).

In any case, I believe the idea that human nature is fallen and corrupted in every aspect of its physiology is the most toxic ideology that Christianity has ever produced. Note that this is completely different than saying that we are born into a world that has been corrupted socially by our ancestor’s sin. I believe in a socially transmitted understanding of original sin. It’s why as a white man, I am racist by default and have to intentionally unlearn the racism of my ancestors. My namesake Morgan of Wales (Pelagius in Greek) argued precisely this with Augustine: that sin corrupts socially rather than physiologically.

If the corruption of original sin is physiological rather than social, then when a five year old kid with a penis says, “I’m a girl,” it can be explained away as the total depravity of human nature since our bodies should be expected to lie to us and we need to believe the Bible over against what our bodies seem to be telling us. No aspect of Christian doctrine is more weaponized against queer people than the idea that human nature is physiologically corrupt.

I thought this argument would be uncontroversial in a queer Christian online community, but because several vocal white queer Christians in the group were ardent Catholics and Calvinists, they took exception to my critique and told me that I was attacking them and calling them anti-queer. Then the moderator stepped in and patronized me. I didn’t rage against anyone, but I didn’t back down either, so I was kicked out. It was a reminder in how little we actually engage the full substance of other peoples’ words online. We get triggered by a word or two and suddenly the other person is “toxic.”

Is the history of western civilization more complicated than one man’s boner becoming the basis for a misanthropic ideology that justified dividing the world between heathen non-Christian brown people and morally superior Christian white people? Yes, there were absolutely lots of factors involved in the five hundred years of colonial genocide that continue to haunt us. But Augustine’s boner made its contribution. And it’s too bad that half a dozen white queer Catholics and Calvinists felt so attacked by my saying this that a moderator took it upon himself to boot me out of the Discord group.

So I’m looking for a new online community for queer Christians who can handle radicals like me and don’t take it personally when I say outrageous things even if they disagree with them. I’m fine with people pushing back and I know that my views are in need of perpetual refinement, but I can’t accept the idea that I shouldn’t say radical ideas out loud in the first place because it’s too destabilizing for other people and they might feel attacked by it.

December 3, 2021
On Being A Christian Pagan Mystic
Next Post

December 6, 2021 Why Does The Knowledge of Good And Evil Make Humanity Fall?
Recent Comments
0 | Leave a Comment
"1) There are millions of imaginary undetected and undetectable gods and goddesses and no authentic ..."
rationalobservations? Our Sin Is Not A Zero ..."
"Sin is defined as a transgression of a divine law. That being the case, the ..."
C Nault Our Sin Is Not A Zero ..."
"I will project character qualities onto Nick Sandman. He is an entitled, privileged POS who ..."
Jimhere Our Sin Is Not A Zero ..."
"good post. maybe phyllis trible's 500 year overhaul of the faith will actually occur. To ..."
eric r Why I Still Call Myself A ..."
Browse Our Archives
get the latest updates from
Mercy Not Sacrifice
and the Patheos
Progressive Christian
Channel
POPULAR AT PATHEOS Progressive Christian
1

Progressive Christian
The Fools: A Group Proposal
Mercy Not Sacrifice 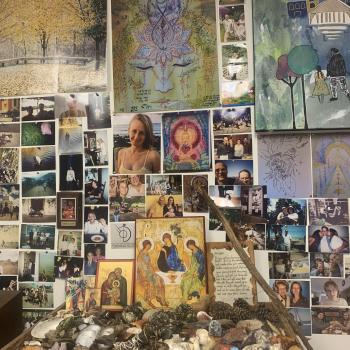