Blindness in the man born blind in this Sunday’s Gospel speaks to a people who were not biomedical in their interpretation of illness.

Blindness. Metaphorically speaking, it is on ready display today. We can speak of the blindness of foolish American collegians disregarding the recommendations of professional health officials pouring down to Florida beaches this week for Spring Break. Again we see blindness in another dangerously irresponsible form in the few pastors and bishops encouraging the faithful to disregard safety measures and assemble to worship. Blindness is on ready display yet again in government officials who make promises about relief packages to Americans during the COVID-19 pandemic, but give the least to the poorest and most vulnerable!

Reversals are featured in this Sunday’s Gospel selection (John 9:1-41). Throughout the Fourth Gospel, the Johannine Jesus is a revealer, the One Sent from the Father who brings light and life. But the occasion of Jesus brokering physical sight and spiritual insight for the man born blind comes at Jesus’ enemies steeped in darkness and becoming blind. This is a story of ironic reversals.

Look below for a basic breakdown of the text we call “John.”

The story of Jesus’ rescue of the man born blind takes place in Jerusalem. Jesus has just left the Temple area with his disciples. The time is Sukkoth, Judaean Feast of light and life given to Israel.

The People who Wrote “John” were ANGRY

By the time they produced the document we call “John,” the Johannine Jesus group was bitterly angry. Unlike other Jesus Groups, the Johannine community did not see itself as a continuation of Israel, but rather a conscious rejection of and alternative to it. In many ways “the man born blind” represents their bitterly lived experience. Just as he was abandoned by his father and mother and expelled from the Synagogue, so too probably they collectively were. This story is a good example for seeing the Three Stages of Gospel Development at work.

Scholars such as Jerome Neyrey, Bruce Malina, John Pilch, and Richard Rohrbaugh understand that the Johannine Jesus group that produced the text called “John” was an antisociety. And like the Johannine Jesus group, antisocieties are usually composed of people who, in one of many different ways, have  been socially displaced. They have been rejected as misfits, depersonalized, made into outsiders, branded as “social deviants” by those in control of the dominant society (what “John” calls “the world”). An antisociety is a human group presenting a conscious alternative and willed rejection to the dominant society.

Malina and Rohrbaugh explain that since members of any antisociety frequently experience socially sanctioned depersonalization and rejection, they must look elsewhere for value and meaning. This results in bonding intense interpersonal relationships within their antisocietal group all the while disconnecting from the broader society.

Therefore, antisociety members glue together in ingroup loyalty (“love” in Johannine antilanguage). All this is centered around the key person in the antisociety. It becomes a fictive kin group sharing a group identity.

Go through “John” looking for it’s antisocietal thought. See how deeply antagonistic it is against “the world” (i.e., first century Israel/Judaean society)? How often does the Johannine Jesus speak about his own alienation? It is similar to the case with the healed blind man.

Johannine Jesus informs his brothers that “the world” (i.e., contemporary Israelite/Judaean society) hates him. Why? It is because he publicaly condemns their evil doings (John 7:7). See how the Johannine Jesus reminds the Pharisees how he is not part of the larger society, but they are (John 8:23)? The Johannine Jesus, just like the sighted blind man, is very aware of his alienation (John 15:18). He is also aware that tight ingroup-glue he and his followers share came out a mutual experience of rejection (John 17:14, 16).

There can be no return to “the world” for the Johannine Jesus. Peace and eternal life are only found by hating life in the dominant Israelite/Judaean society (John 12:25) and sticking like glue in the Johannine Jesus group (John 14:27). Would Paul agree with that? Would “Matthew”? How about Peter or James?

Here is where we can understand the very peculiar and deeply significant Johannine expression “believing into” Jesus, used 34 times in the Fourth Gospel. It means the same thing as when “John” expresses the necessity to “remain” or “abide” in the Johannine Jesus (translations of the same Greek verb employed 53 times in “John”). It’s all about continual emotional embedding into the Johannine antisociety, maintaining fiercely close interpersonal relationships.

A Brief History of the Johannine Antisociety

How did this Jesus group become such an antisociety? Scholars recognize that the Johannine Jesus group evolved through various stages of development. It its nascent stage sometime in the mid 50s of the first century, this group was like most other Jesus groups. It saw “the world” (the dominant Israelite/Judaean society) as something good, even if it needed reform in Jesus through evangelization. Indeed, Israel deserved evangelization!

But then time passed. By the late 80s, some Judaean audiences violently ejected male believers in humiliating ways from the synagogues. This scared the Johannine group. It shocked them so much to occasion the evolution of a new perspective. They gained an intensely negative attitude toward “the world.”

The story of the man born blind is in many ways the story of the blindness given by Judaeans toward Johannine misfits. It’s not hard to see why we have to be very careful reading this all in historical context and never translating Ioudaioi as “Jews.” The Fourth Gospel has been continually misinterpreted along antisemitic lines. But there are no Jews in “John.” In fact, there cannot be. 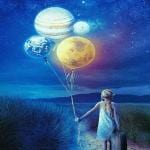 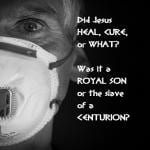 March 24, 2020 Royal Healing & Gospel Contradictions
Recent Comments
0 | Leave a Comment
"While understanding Karl Rahner's idea of the church being most realised when celebrating Eucharist, the ..."
louisquinze Who Is Worthy of the Eucharist?
"Do not fret, panicking people. If Trump appoints Amy Coney Barrett, there will be no ..."
Ame What Made John of Apocalypse a ..."
"You commit a fallacy by assuming that the stories in the Old Testament were written ..."
digitalbeachbum Trump and 666—Any Connections?
"Although coming from a different direction than you, I am in agreement with the conclusion."
Ame Who Is Worthy of the Eucharist?
Browse Our Archives
get the latest from
Messy Inspirations
Sign up for our newsletter
POPULAR AT PATHEOS Catholic
1 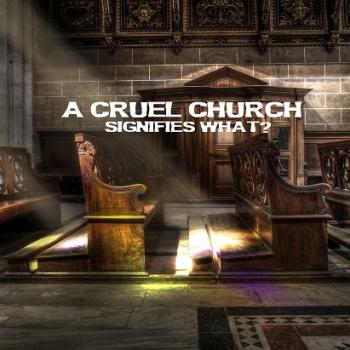