Hero of Good Friday, Jesus and his sufferings are presented according to cultural values that clash greatly with Western understandings.

Hero—from the Greek ἥρως (hērōs)—is the great champion, the defender, the protector. But what does he champion, defend, and protect? What does he safeguard?

Gilgamesh, Heracles, Achilles, Joan of Arc, Oda Nobunaga, Hua Mulan, Superman, Wonder Woman, Batman, and Captain America are all culturally-specific heroes, that is, champions, defenders, and protectors. Often what they champion and defend are cultural values—indeed, each hero is remembered as the symbol of such. The hero becomes the spokesperson for what is most valued by a given society. In many ways, Jesus, as presented in the Gospel Passion Narratives, can be considered also as a hero.

From Zero to Hero

When Emperor Constantine converted, almost overnight, the small Body of Christ which had before evangelized slowly suddenly ballooned in members. Up until the 300s, disciples of Jesus were overwhelmingly Israelite. But then, within the blink of an eye, things had drastically changed. Now the Church was almost completely non-Israelite. How did this happen?

To understand why this happened consider the difference between homophilous and heterophilous communication. Before the fourth century, the Jesus groups communicated the Gospel in predominantly homophilous ways—i.e., horizontally. That means the Gospel was shared with like-minded people of common ethnic identification, at the same socio-economic level, almost identical understandings and beliefs, etc. Because homophilous communication spreads languidly, the Body of Christ grew at a snail’s pace for centuries.

But after Constantine, Christianity was off to the races via heterophilous communication—i.e., vertically. To evangelize heterophilously means to work with those outside your education, social status, beliefs. And unlike homophilous communication, the results of heterophilous evangelization spreads like wildfire. This is because when king or emperor converts, all the people do likewise. Thus the ethnic makeup of the Church changed almost immediately with Constantine. But before and for a good while after this, the Body of Christ remained Mediterranean throughout.

Simple math sheds light on the historical record and cultural data. About 220 bishops attended Constantine’s Council of Nicea (325 CE) to which all had been summoned. Anthropologists inform us that without mass media communication a person cannot maintain a social network greater than four thousand people. Therefore, 880,000 is the maximum number of believers by the beginning of the fourth century. This reveals an annual growth rate of 2.5 percent. Hence, we can know that before Constantine’s conversion, the Body of Christ operated via homophilous communication.

The Evolution of Good Friday

What would the new imperial Christianity, established as the state religion, do with all these new people pouring in? New pastoral and catechetical needs arose for the new Christians who were oblivious to Israelite traditions and understandings, as well as the Gospel reports and Passion narratives!

The Pascha and Good Friday evolved with the birth of Christianity in the fourth century to deal with these problems. The liturgical celebration of Good Friday developed to meet the needs of the growing mass of Jerusalem pilgrims and converts to Christianity. Common ground in Mediterranean social values helped paved roads of understanding.

Despite the major changes that occurred between the earlier, mostly Israelite Jesus groups lasting till 325 CE, and the Church of Imperial Christianity following that, things were still very Mediterranean. Hence Mediterranean cultural values remained as the primary lens used to interpret the historicized faith-festivals of the Pascha and the Great Friday/Good Friday. Common Mediterranean culture was the link behind the Scripture readings of Good Friday.

Israel, the Faithful Servant and Hero

On Good Friday Latin rite Catholics read from Isaiah 40—55, specifically, 52:13—53:12. This is a “song” tradition has called that of the “suffering servant” (the Mediterranean hero of Isaiah 40—55). But the Context Group of biblical scholars explains that it would be more precise to refer to the speaker of the hymn as “the faithful servant who willingly suffers.” This servant (Isaiah 42:1-4) is not really an individual hero, but rather is Biblical Israel dressed up as a sick person. Israel, captive, hopefully will recognize itself in this sick but faithful servant who, in undying loyalty as Mediterranean hero, willingly suffers (Isaiah 49:3; cf. 1:4-6).

Although utterly humiliated, Israel the sick but loyal servant, the hero, is saved by God. Israel had shamed (sinned against) the God of Israel. To get even, Israel the servant and hero, suffers. But Israel’s loyalty impressed God seen via Mediterranean cultural lenses—the sufferings became like a sin offering offsetting the offense. God therefore restored the humiliated hero, Israel.

Christians need to escape the error of supercessionism and the evils of antisemitism. The Isaian songs (Isaiah 40—55) offer a treasure that both Christians and Jews in their lived experience can continue to draw from. There are many branches on the Abrahamic tree and all draw from the same roots. Thank God we removed the disgusting “faithless Jews” (“perfidis Judæis”) stain from our Good Friday petitions! Sadly, grappling over the issue has continued.

Our abysmal translations of the Gospel called “John” don’t help. On Good Friday again and again English parishes read “Jew” and “Jews” in the Passion Narrative (John 18:1—19:42). To say why it should always read JUDAEAN or JUDAEANS, and never “Jew” or “Jews,” please read the scholarly tour de force by John Elliott here.

Turning to the Second Reading for Good Friday (Hebrews 4:14-16, 5:7-9), read carefully those latter verses (Hebrews 5:7-9). Look at how they marry so well with the same cultural understanding of the first reading, Isaiah 52:13—53:12. What is being described here is not a clever American hero but rather a model for raising Mediterranean sons. John Pilch’s translation of verse 8-9 improves the inappropriate “son though he was” of the NABRE—

“Precisely because he was son, Jesus learned obedience from what he suffered. He offered prayers and supplication with loud cries and tears to God, who was able to save him from death, and he was heard because of his reverence.”

“Abba, Father, all things are possible to you. Take this cup away from me, but not what I will but what you will.”

How to Raise Sons and Heroes, the Bible Way

Because of the fiercely gender-divided biblical world with father and all male role models mostly absent in their prepubescent years, MENA males necessarily are haunted their entire lives with a gender ambiguity. Therefore they must forever prove their Mediterranean manhood. This helps explain Middle Eastern and Mediterranean hyper-ethnomasculinity promoted in the Good Friday readings and parental advice from Proverbs and Ben Sira.

So, in a mixture of love and violence, Mediterranean manhood was literally beaten into Israelite postpubescent sons by their fathers. This was to condition them to being unquestionably male in this cultural sense, even to be able to languish on a cross for six hours without complaining. Fourth century non-Israelite Mediterranean male converts would find this congenial to their upbringing as well.

Fellow Western Christians if we are really honest with these readings and drop our pietism and devotional sentiments just for a moment, it’s perfectly fine to feel repulsion at the resulting image. Should someone from the United States follow the advice from Proverbs or Sirach, psychopathology might be cultivated, and criminal charges ought to soon follow.

And what American hero—Luke Skywalker, Captain Kirk, Indiana Jones, Spider-man, etc.—wouldn’t try and use his smarts and cleverness to escape such a grisly fate and live to fight another day? Taken honestly, the Good Friday readings communicate sentiments foreign and frankly repugnant to our cultural world.

The Upbringing of the Hero Jesus

What are we to do with the various Passion stories and other readings from Palm Sunday and Good Friday? We Christians ought to take the IN of IN+spiration and IN+carnation very seriously. The inspired Scriptures are Mediterranean documents reflecting Mediterranean values—Mediterranean culture is the first interpretation of Scripture. And since IN+carnation happens in, MENA personality Jesus must be understood as being very much a man of his cultural world and not ours.

Seen that way, how could Joseph and Mary not have followed the advice of Proverbs and Sirach in rearing Jesus? If you balk at that, better check for Western ethnocentricism in your devotional understandings. Are you demanding that to be holy the Holy Family must be enlightened Americans? I would think that outrageous yet typical. Americans will not tolerate a Jesus who will not buy American cultural values.

Would it be irrational to think that the historical Jesus who likely had memorized the text of Isaiah in similar fashion to how Middle Easterner peasants still memorize the Quran, wouldn’t cherish the image of Isaiah’s faithful servant? Would he not, on the Cross, have found comfort from this model as he languished without complaining?

Shame or Gratitude on Good Friday?

Should we be ashamed of our Israelite ancestors in the faith of the first century or the non-Israelite Mediterranean converts in the fourth? Should we be embarrassed that they would assuredly share the admiration for the manly hero Jesus held by the Centurion in Mark 15:39?

There’s so much to ponder here. With Pilch and the Context Group I am grateful for our Mediterranean ancestors in the faith. Why would I be ashamed of previous dying inmates who grappled to understand Holy and Absolute Mystery in their midst the best way they could? With Pilch and friends I think we should be grateful for trying to put into words what can never be domesticated by human language. They continue to help us better understand Jesus our savior.

That said, we cannot pretend to be ancient Mediterraneans. We cannot interpret pain and suffering the same ways they did. Medically, we strive to eliminate or assuage suffering. What becomes then of “redemptive suffering” in light of these real cultural differences?

For Lent and always, metanoia. Stay safe my friends. 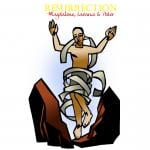