Embarrassment, my fellow Americans, is what it is. We are an international embarrassment. I’m not saying that last night was the most embarrassing this country has ever faced, but it’s somewhere on the count. And with four intolerable years of such nights under a miserable comedy of Donald Trump’s presidency, that says something.

I should be, most of all, praying. But most of all, I’m embarrassed. And you ought to be as well, American sisters and brothers—mostly fellow U.S. Christians. Most especially us U.S. Catholics. Because we are an international disgrace and embarrassment. Tuesday night was appalling.

“At least Biden won.” Lay off the drugs. Nobody won the debate. Wake up. There was no debate. How can you have a winner of a debate that never happened? The only thing televised was a disgrace. And we all lost, bigtime.

Every respect life office and “pro-life” outfit in every U.S. diocese is stained by Trump. They should wear sackcloth and ashes, except that such an act of public penance would bear zero intelligibility for our culture. In their ardent enabling of Donald Trump and his cult, they are blameworthy should (God forbid!) the hell of civil war return to our country. The grave sin of white supremacy  is incompatible with the Gospel of Life.

Many U.S. bishops have wed themselves to Donald Trump and failed to denounce his white supremacy. Bishops, you should trade your scarlet silk in for fecal brown. Turn away from your lavish gala dinners and your prostitution with American “Great Ones.” Serve others, not yourselves! Your sin threatens to turn countless parishes into Eucharistic vomit.

At Least Joe Biden Was Decent

And lovely moments don’t cut it, Uncle Joe. The old boomer didn’t win—we all lost. Can the DNC do anything but lose? Including pathetic Joe Biden. It’s just that his incompetence is like a speck to the supermassive black hole of POTUS Trump. Joe is still an embarrassment, even if dwarfed by Trump. This is what we get? The entire affair was disgraceful.

Oh, don’t worry. Joe has my vote. Taylor Marshall, Frank Pavone, James Altman, Joseph Strickland, and everyone at EWTN can jump in the January Potomac for all I care about their spew. I won’t sin against my conscience. I’m too Catholic for that. So yes, I will vote for Joe. But don’t you dare count that as me “ridin’ with Biden.” And he must be held accountable from Day One. All D.C. plutocrats must be.

Appearing to be a decent human being like Joe does isn’t good enough. I say “appearing” because human slave trade in Libya isn’t decent or humane. Nor are drone strikes on children. Neither is hanging Americans suffering evictions and job-loss from COVID-19 in limbo. No, I wouldn’t call Uncle Joe, Nancy Pelosi, and Chuck Schumer with their insurance ticket for a blue wave “decent human beings.”

Biden failed Tuesday night. No, his failure isn’t the horrific train wreck that is Trump but failed he did. But hey! When you are at the end of your rope, even Uncle Joe looks good.

Despite my feelings for Biden, what Trump did using the suffering of the former vice-president’s son as a cudgel was abominable. That move alone tarnishes the presidency forever. And how many nasty, underhanded, sickening evils has this pig defiled the White House with since taking office? And we go on tolerating him. For what? Extinction? Is extinction being “pro-life”? Wake up, Catholics!

We are on the verge of civil war, and Trump is throwing gasoline on the fire. Two hundred thousand people are dead, and Trump dances with dictatorship, threatening he will throw out election results if things don’t go his way. And he orders his personal White Supremacist thugs to stand by? For what, civil war?

Disgraced Trumper Catholics: your “pro-life” president refuses to condemn white supremacy. What are you going to do about that?

Archbishops and bishops, the faithful are failing under your terrible, good-for-nothing watch. De facto schism massacres Christ’s body in these United States. It has for some time, and the vivisection is a bloody mess. Where are you? What are you thinking? You rush to muzzle anyone who dares suggest a female could be ordained. Still, it should be evident that it’s far more likely to occur to women than to spineless jellyfish. Ontological change? What an embarrassment.

Hey Archbishop, USA? Stop being a coward and condemn white supremacy with the energy you placate your rightwing donors with. Get your brother bishops on board. Being a politician doesn’t suit you. Don’t schmooze with late-night personalities who don’t know your penchant for bullying or lack of justice with employees. Do you want to climb up the ecclesial ladder? Leaders lead. Servants serve. Some of you (I’m being generous) have disgracefully torn authority from service. Serve and lead by condemning the many white supremacists in your dioceses and Donald Trump. Or resign posthaste.

“This is not going to end well.” Trump dares to say. Excuse me, but WTF? This man, who fop cardinals feast and giggle with, threatens to take us down into his abyss of failures? And the world along with us?

If I hear again another Catholic meaninglessly parroting John 14:6 I will throw up.

Let’s pray tonight. U.S. Catholics, let us pray every night for courage. May God grant us the courage of true Americans and real Christians. From violence, God save us! 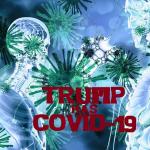 October 2, 2020 Trump Has Coronavirus
Recent Comments
0 | Leave a Comment
"Paul like Martin Luther is overrated. Both were likely led to reshape religion by their ..."
Statistics Palin Overrated Romans
"Much the wisest piece about the challenges of applying Scripture to life in the present ..."
Brad of the North Meaning and the Words of Scripture
"Hmm. Nothing to apologize for? How about: Crimes Against Humanity (the Crusades). Genocide (Missionaries in ..."
Kyllein MacKellerann Witches Burning—The Most Shameful Episode of ..."
"How about apologizing for murder?"
Mike Curnutt Witches Burning—The Most Shameful Episode of ..."
Browse Our Archives
get the latest updates from
Messy Inspirations
and the Patheos
Catholic
Channel
POPULAR AT PATHEOS Catholic
1

Unmasked: Pride, Malice, And The Spirit...
A Little Bit of Nothing