Lowly and poor was the village tektōn Jesus, just above the degraded and expendable of first-century Palestine.

How lowly was Jesus? In other words, how low was Jesus’ honor ranking? To find out, we will need to explore village life and rural peasants of first-century Galilee. Forget about the Sunday School pictures and Jesus movies—they aren’t honest to the reality.

Jesus was near the bottom of the social spectrum of his world.

According to Context Scholar Richard Rohrbaugh, culture, economics, and politics were dominated by the poleis in the Mediterranean world of Jesus. Poleis is plural for polis or Mediterranean urban center. No, not a city—post-Industrial cities are quite different than first-century poleis.

Despite their tremendous influence, the polis wasn’t where most people lived. In fact, 90 percent of the population lived in villages. These were farmers or workers extracting raw materials. To understand Jesus’ story and who he is, you need to know about the rural groups residing throughout the villages of Galilee.

Jesus is to be found among Galilean peasants (75 percent of the total population). Among them were freeholders, tenant farmers, day laborers (ergatai), slaves, and several groups without land. In this last bunch were fishermen, artisans, and various craftsmen.

Among the peasants of Galilee were those who owned and worked their own land. These were freeholders. They survived by farming and whatever nonagricultural work they got in the off-season.

Consider that peasants needed to save seed for the following year’s harvest. Add in fodder for their animals. Also, they would need to trade grain for things they could not produce. And don’t forget about the exploitation of the Temple, the priesthood, the Herodian regime, and Roman tribute in tolls. Ultimately, as Rohrbaugh explains, peasant economic viability in Jesus’ day was precarious.

Peasant freeholders were losing their lands to debt foreclosure in epidemic proportions. The greedy urban elites controlled the courts. And court decisions therefore favored those elites. Could Jesus’ family have suffered the fate of this injustice?

Imagine that you, a peasant freeholder, have fallen into debt. Drought frequently comes in the Galilee. With poor harvests, your family eats this year’s seed grain to survive. What will you do for the following season? You must borrow seed grain. Now you are in debt.

If this pattern continues, your land will be taken from you. In Jesus’ day, many former freeholding peasants had become landless tenant farmers.

Scribes wrote contracts to favor the elite lenders. How could peasants, illiterate, respond? Do you understand why labor violence pops up so frequently in Jesus’ parables? It was an everyday occurrence to Jesus and his audience.

Maybe the contract was for one year, or maybe for a lifetime. Rohrbaugh explains that payment could be provided in various ways, ranging from money to a percentage of the harvest. Fixed rents could go as high as two-thirds of the crop. Disastrously, according to David Fiensy, entire villages (like Qawarat Bene-Hassan) were consumed. All residents became tenants for a single elite landlord (see The Social History of Palestine in the Herodian Period: The Land Is Mine, p. 84).

Galilee knew plenty of day laborers and slaves. They worked harvests, but Rohrbaugh and others list them as barbers, bathhouse attendants, messengers, manure collectors, cooks, and construction workers.

Landless day laborers were very near the bottom of the honor scale and socioeconomic profile of Herodian Palestine. They were known to drift into towns and poleis looking for work. Urban centers always needed new labor. As Rohrbaugh and others explain, this wasn’t because of growing economic opportunity. Instead, it was due to the enormously high death rates among the urban poor.

Near the bottom of village peasant life, but above the unclean, degraded, and expendables, we find Jesus and his inner circle. Here are despised fishermen and herders and the artisans—craftsmen, weavers, and potters, blacksmiths and carpenters. Artisans had to travel to find work, especially if from a tiny hamlet like Nazareth. Itinerant people were universally considered social deviants in antiquity. Such workers were ranked extremely low on the social scale.

Only the degraded and expendables were below Jesus, and we know he was always in contact with them.

Why Does This Matter?

So here is Jesus. Here is the Holy Family. Remember that at Eucharist. Bring this to mind in your devotions and Rosaries. And that, finally, brings us to Jesus, the village tektōn. Legend says that Jesus’ family were specialists at making yokes for oxen. As Dr. Rohbaugh says, if this corresponds to the historical Jesus, he would have been near the poorest and lowliest among Israelites.

Much of Christian history has robbed us of seeing Jesus (and Mary!) as they were. Why do you think that is?

Consider this: there were no schools in Nazareth. And why would Jerusalem elites want to foster a literate peasantry? On the contrary, it was their advantage to keep reading and writing limited to the very few. Therefore illiterate peasants memorized the Scriptures. They knew the Scriptures through repetition. 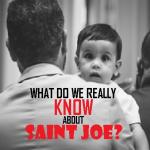 May 6, 2021 Mary of History
Recent Comments
0 | Leave a Comment
"No"
Ame Apocalypse & 666: What Does this ..."
"That's right. We can never be certain so let's not try. /s"
Raymond Timothy and Titus Are Forgeries, and ..."
"That's right. Context doesnt matter. Knowing anything about the history and background of Scripture just ..."
Raymond Timothy and Titus Are Forgeries, and ..."
"If you have time please take a look at this.Obama lottery 666 you have got ..."
geirsmith Apocalypse & 666: What Does this ..."
Browse Our Archives
Related posts from Messy Inspirations