In view of the new encyclical of Pope Francis, I would like to revisit the idea of “Blue Environmentalism.” This short series is an adaptation of some of my writing from 2003.

It would be a shame for the Magisterial significance of Laudato Si’ to be obscured among arguments over empirical worldly assertions concerning the environment. Instead, it seems better to turn our attention to the general moral imperative the pope urges upon us.

We must think hard about the most practical and fruitful things we can do in the next two decades. No one can deny the connections between poverty and the state of the environment. Moreover, I suggest that if you care about the environment, your symbolic color should be not green but blue. For over two-thirds of the planet’s surface is blue, and represents a major environmental challenge: Even with all that water, over 780 million people still lack clean water to drink.

Furthermore, blue has a political meaning. Where people are poor, environmental conditions tend to be abysmal; and if the twentieth century proved anything, it was that the best way to end poverty isn’t red – the color of socialism – but blue, the color of liberty, personal initiative, and enterprise.

“Blue Environmentalism” is the way we should build on the stunning success of the environmental movement, the immense positive effects of which cannot be ignored. Clean-air legislation went into effect in 1955 and was amended several times – there were not any politicians willing to be in favor of dirty air – and from 1976 until 1999, a period of only 23 years, the six types of air pollution proscribed and closely monitored by the Environmental Protection Agency were brought down quite sharply. Lead pollution, for example, was reduced by 97 percent; sulfur dioxide by 65 percent; and carbon monoxide by 68 percent. The Pacific Research Institute has collected other data from the EPA regarding air quality and toxic chemicals that exemplify similar progress. 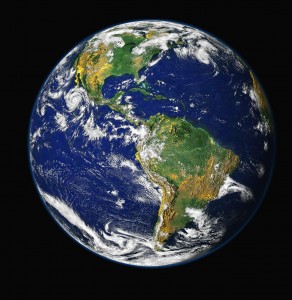 Emboldened by this realistic assessment of the progress we’ve made, we should tackle the specific key issue I mentioned above: clean drinking water. About 1 in 9 people in the world don’t have it. Helping them is a serious and urgent task.

A section of Laudato Si’ (27-31) is devoted to “The Issue of Water,” and Francis himself states the matter quite directly: “[A]ccess to safe drinkable water is a basic and universal human right, since it is essential to human survival and, as such, is a condition for the exercise of other human rights. Our world has a grave social debt towards the poor who lack access to drinking water, because they are denied the right to a life consistent with their inalienable dignity” (LS, 30; emphasis in the original).

The problem afflicts the poorest worst of all. In developed countries virtually all of the population has a clean water supply. In Africa, by contrast, only 68 percent – of a population of more than 1 billion people – have clean running water.

Africa should be the top priority. Given that continent’s unusually acute internal variations in water supply, its water system needs to be among the best designed in the world; instead, it is the most neglected in the world. A constant cycle of civil wars, maladministration by fragile governments and kleptocracies, and poorly managed financial resources have penalized Africa’s peoples severely. This political deficit prevents Africa from enjoying the economic progress of most of the rest of the world – notably that of Asia, which not long ago was even poorer than Africa but has now leapt ahead of it.

None of the technical difficulties facing the effort to supply Africa with water presents challenges that have not been conquered on other continents. But the political, cultural, and economic obstacles are more serious. Much of Africa has become accustomed to subsidized and/or free water; at the same time, no one is obliged to pay for polluting existing streams of water – neither farmers whose agricultural runoff damages water use downstream, nor industrial polluters, nor cities and villages that pour untreated effluents into the water supply. There are no incentives to save and protect clean water. As a result, water is too often treated irresponsibly.

There need to be policies to incentivize more responsible use. For instance, if citizens in certain regions were given water coupons that entitled them to an adequate personal share of free water per year, and had to pay modest sums for any additional use, they would for the first time face incentives to use water responsibly – or else pay for it. In a similar spirit, costs should be imposed on polluters, whether industrial or governmental or familial, in proportion to their spillage of untreated materials into sources of supply for others. Also, financial or other rewards should be offered to any entities that build and maintain treatment facilities.

Bringing water to all the world’s people requires imagination and enterprise, capital and high skills in organization. In some places, public utilities may be best for supplying water, if they can be both efficiently run and kept free of corruption; in other places, well-regulated private companies will be best; and in still others, public-private partnerships. But in all cases, Blue Environmentalism encourages the highest possible level of practicality, and private enterprise.

And that principle doesn’t apply just to the clean-water issue; it has lessons across the environmental spectrum. The crucial insight, of which Pope Francis reminds us, is that nature is meant for man, not man for nature. Human beings are made by their unique endowment of liberty to be provident over their own destiny. One important way to exercise this providence is to take care not to foul our habitat.

In Francis’s words: “Judaeo-Christian thought demythologized nature. While continuing to admire its grandeur and immensity, it no longer saw nature as divine. In doing so, it emphasizes all the more our human responsibility for nature. This rediscovery of nature can never be at the cost of the freedom and responsibility of human beings who, as part of the world, have the duty to cultivate their abilities in order to protect it and develop its potential” (LS, 78).