To Whom Would Jesus Deny Communion? 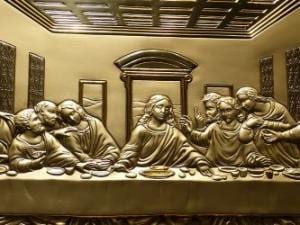 Joe Biden is the second Catholic to be elected President of the United States, a fact that has added fuel to a longstanding debate in the Church in the United States. Many conservative American Catholics prefer to frame the debate as a matter of canon law. Should American bishops enforce canon 915 of the Code of Canon Law? If so, how should that be done?

Those upon whom the penalty of excommunication or interdict has been imposed or declared, and others who obstinately persist in manifest grave sin, are not to be admitted to holy Communion.

At the conclusion of the USCCB meeting in November, Archbishop José Gomez of Los Angeles, president of the [U.S. bishops] conference, announced a task force that will steer interactions with the new president.

De Souza then complained that the Archbishop of Washington, D.C., head of the archdiocese in which Biden will be residing for the next four years, failed to get on board with the national conference’s program:

Short-circuiting that examination, Cardinal [Wilton] Gregory announced that he would prefer cooperation rather than confrontation with the new president and that he would not deny Biden holy Communion, just as he was not denied holy Communion for the eight years he served as vice president [from 2008 to 2016].

There are any number of threads I could unravel in this essay. For example, De Souza gives as his primary example of Biden’s current presumptive “unworthiness” to receive Communion his recent choice of Xavier Becerra, California’s attorney general, to serve as his Secretary of Health and Human Services. Becerra is also a Catholic, noted by De Souza, but his fitness for Communion isn’t mentioned.

For all of De Souza’s posturing that “no one suggested that [the Eucharist] should be” used as a “political weapon,” there’s curiously no mention of other Catholics whose recent actions create scandal for the faithful—such as U.S. Attorney General William Barr’s rush to execute prisoners on federal death row before January 20, 2021, even in the face of Pope Francis’s recent decision to close all loopholes on the admissibility of capital punishment.

Then, of course, there’s the face-palming over Cardinal Gregory’s decision to not deny Biden Communion. Conservative Catholics generally sniff at the USCCB, especially at decisions made in committee and without a full vote of the conference. Bishops govern their own dioceses, the conservatives piously proclaim, which is why bishops don’t have to listen to the national conference (under most conditions) if they don’t want to. But when our country’s first African American Cardinal announces his decision to grant the sacraments to a Catholic who will be living in his archdiocese for the next four or more years, suddenly he’s scolded for “short-circuiting” the USCCB’s new task force.

In fact, the Archbishop-Emeritus of Philadelphia, Charles Chaput, went further and accused Cardinal Gregory and like-minded bishops of “effectively undermin[ing] the work of the task force established at the November bishops’ conference meeting to deal precisely with this and related issues” (emphasis in the original). Supposedly, this decision by bishops to govern their own dioceses “gives scandal to their brother bishops and priests, and to the many Catholics who struggle to stay faithful to Church teaching.”

Rather than pick at these nits, though, perhaps we should step back and ask whether it should be appropriate for bishops to treat the Eucharist as disciplinary tool at all.

Apologists for the bishops’ sacramental authority rely on our Lord’s grants of authority to his apostles—and, by extension, to their successors. In Matthew’s Gospel, Christ gives Peter and his brother apostles the power to bind and loose. He promises them that “whatever you bind on earth shall be bound in heaven, and whatever you loose on earth shall be loosed in heaven” (Matt. 16:19, 18:18). After his Resurrection, in John’s account, Christ breathed on the apostles and said, “Receive the Holy Spirit. If you forgive the sins of any, they are forgiven; if you retain the sins of any, they are retained” (John 20:22–23).

Without attempting to parse out the full extent of the authority Christ had in mind, I can note that I find it interesting that the apostles themselves and their immediate successors didn’t seem interested in trying to determine who was “worthy” to receive Communion and who wasn’t. While apologists often call upon St. Paul for support for modern eucharistic discipline, quoting his letter to the Corinthians, a close reading will show that he didn’t say what the apologists think he said. In his discussion of why the Corinthians were experiencing sickness and death, Paul stated:

For as often as you eat this bread and drink the cup, you proclaim the Lord’s death until he comes. Whoever, therefore, eats the bread or drinks the cup of the Lord in an unworthy manner will be guilty of profaning the body and blood of the Lord (1 Cor. 11:26–27).

But Paul didn’t stop there. He didn’t offer to tell the Corinthians who should be kicked out of the Communion lines. Instead, he wrote this:

Let a man examine himself, and so eat of the bread and drink of the cup. For any one who eats and drinks without discerning the body eats and drinks judgment upon himself. That is why many of you are weak and ill, and some have died (1 Cor. 11:28–30, emphasis added).

For Paul, it was each Christian’s responsibility to determine his own worthiness to receive Communion. If that person didn’t take that responsibility seriously, if he chose to receive when he should refrain, he risked illness and death. The apostles were responsible for handing on true doctrine (1 Tim. 4:6), but it was the responsibility of the faithful to receive that doctrine and follow it.

In the Didache, a first-century Christian document written during the lifetime of at least a few of the apostles, the writer echoed Paul that those who receive shouldn’t be in a state of sin, but said that the remedy was repentance: “If any one is holy, let him come; if any one is not so, let him repent” (10). Those to be admitted must be baptized (9) and should confess their sins before receiving the Eucharist (14). There’s a brief allusion to excluding those “who [are] at odds with [their] fellow [Christians] … until they be reconciled, that your sacrifice may not be profaned” (14), but the assumption appears to be that the reconciliation was between individuals and that exclusion wasn’t considered to be either a permanent or ongoing condition.

When Protestants base conditions for salvation exclusively on St. Paul, Catholics complain that they’re ignoring Christ’s own words in the Gospels, especially in his Sermon on the Mount. But conservative Catholics do the exact same thing with the Eucharist. They focus on Paul’s letter to the Corinthians and ignore Christ’s own example at the Last Supper.

Jesus knew for a long time that Judas Iscariot no longer believed in him. When Christ first promised that he would give his body and blood as food and drink, he knew that Judas didn’t believe:

For Jesus knew from the first who those were that did not believe, and who it was that would betray him. And he said, “This is why I told you that no one can come to me unless it is granted him by the Father” (John 6:64–65).

John reported that Jesus compared the one would betray him to a devil (6:70). And yet Jesus didn’t exclude Judas from the apostolic band. Judas continued as an apostle, entrusted to the very end with carrying the apostles’ common funds, despite being a thief (John 12:6, 13:29). Although John chose not to include the eucharistic institution narrative, and thus was unclear about when Judas left the Last Supper, Luke suggested Judas was present and received the Eucharist from Christ himself:

And [Christ] took bread, and when he had given thanks he broke it and gave it to them, saying, “This is my body which is given for you. Do this in remembrance of me.” And likewise the cup after supper, saying, “This cup which is poured out for you is the new covenant in my blood. But behold the hand of him who betrays me is with me on the table. For the son of man goes as it has been determined; but woe to that man by whom he is betrayed!” (Luke 22:19–22).

When we consider that Luke was Paul’s protégé (e.g., 2 Tim. 4:11), that sheds a bit of light on Paul’s own insistence that a man examine himself before receiving the Lord’s body and blood, lest he “eat and drink judgment upon himself.”

Canon law, as we saw, denies Communion to those “upon whom the penalty of excommunication or interdict has been imposed or declared, and others who obstinately persist in manifest grave sin.” But, unlike the Ten Commandments, canon law isn’t set in stone and hasn’t been written with the finger of God. It can be revised and overhauled, as it was in 1983. Popes since then have occasionally modified individual canons while leaving the bulk of the legislation in place. And, even then, there remains plenty of room within the law for national conferences and individual bishops in their dioceses to dispense from requirements for the good of souls under their jurisdiction.

Rather than pound on a book of law that is open to interpretation, revision, and reform, perhaps American bishops, clergy, and laity who are so eager to deny Joe Biden Communion—while showing no inclination to levy that penalty against Catholic public officials who are Republicans—ought to return to the sources of Scripture and the Church Fathers, and ask themselves, “What would Jesus do?”

December 11, 2020
What Mary Knew Is Her Own Business
Next Post