Catholic Answers and the Trouble with Yoga

In a recent Dark Devotional for Sick Pilgrim, I commented on how Catholic Answers, where I worked for two decades as a staff apologist, seems to be busying itself with re-creating all of the content I’d contributed over the years I worked there and that they have since chosen to scrub from their site.

After that devotional was published, I wondered if I had perhaps overreacted. Perhaps I was reading too much into an innocent string of entirely isolated coincidences, I thought. I went back and re-read what I’d written several times, wondering if I should ask the editors to remove it from the blog after all.

Despite my feelings about Catholic Answers, I have no desire to be unfair to them.

Then I received a promotional email spotlighting a new essay on Catholic Answers’ web site. After clearing my throat of the tea that suddenly went down the wrong pipe, I went back and re-read what I’d written for Sick Pilgrim earlier that month.

At first I thought it was a coincidence when some of the saints I wrote about got new treatments. After all, the lives of say, St. Valentine and St. Maria Goretti, can be inspiration for many writers. Then other topics started to recur. Still, I reminded myself that I’m not the only person with something to say about how conversion can be painful.

Nonetheless, the other day I blinked when I saw that the apostolate’s pro-life guru re-created a response to a science-fiction novelist’s thought experiment of a few years ago, in which the writer asked pro-lifers whether they’d save a small child or a canister of embryos from a fire. My original response had been written not long after the writer’s Twitter thread exploded on social media, bringing claims that he’d silenced pro-lifers with an “unanswerable” argument. The essay I wrote was one of the most well-received essays I wrote for Catholic Answers and plugged a necessary hole in the apostolate’s resources.

This time, they’d published an article on whether Catholics should take up yoga.

The Catholic Answers article for which I’m best known is “The Trouble with Yoga.” It ran in the print magazine in 2012 and was re-published to the web site. At the time, there was an almost complete absence of mainstream Catholic analysis of yoga and how the Church viewed Christian participation. What small notice had been taken of yoga in Catholic circles came mainly from Johnnette Benkovic’s Women of Grace, and their take relied heavily on Fundamentalist Protestant demagoguery linking yoga to devil worship.

Writing the article was difficult for me. Other than some stretching in front of a television to a yoga DVD, I didn’t have direct experience with yoga. I had to research the topic extensively. In learning about yoga and determining what the Church thought about Eastern spirituality, I drew upon books written about yoga by practitioners and from Church documents such as the Catechism of the Catholic Church, the Congregation (now Dicastery) for the Doctrine of the Faith’s Some Aspects of Christian Meditation, and the Vatican II document Nostra Aetate. Since I don’t have formal training in philosophy, I discussed the philosophical aspects I needed to cover with my director, Tim Staples. Jimmy Akin, Catholic Answers’ senior apologist, read and commented on the first draft. Akin’s suggestions were incorporated into the final draft.

In case anyone might think the article was just an “emotional outburst” from an “unqualified” female apologist.

After its publication, the article was circulated widely on the Internet. Not only was it consistently recommended in Catholic online discussions of yoga, but it was cited as an orthodox expression of Church teaching on the subject in books and even in court documents. When commenting to Facebook friends on yet another citation I’d found in a book, I once joked that if I’m ever canonized I’ll be named the patron saint of yoga.

So, naturally, the loss of that article left a hole that had to be filled in Catholic Answers’ apologetics offerings.

I wasn’t surprised that the apostolate chose to feature a new article on yoga. Hey, bitter as I am, I do recognize that it’s a topic Catholics ask about. If my oeuvre had to be flushed down the memory hole (which I dispute, but what was done was done), and if the question is still being asked, then it’s not unreasonable to tap someone else to provide an answer.

Let’s take a look at the New and Improved Catholic Answers Apologetics Answer to Yoga then, shall we?

The essay was written by Alexander Frank, whose biography stated that he “converted to the Catholic faith in 2019 from Kashmiri Shaivism, a sophisticated form of yoga.” He converted to Catholicism from yoga?

I did a quick skim of Kashmiri Shaivism, which I will admit I’d never heard of before reading Mr. Frank’s bio. According to Professor Wikipedia—a tenured but doddering veteran of academia, who can be helpful but not entirely trusted—KS, as I’ll call it to guard against typos, encompasses both a philosophy and a yogic practice. Not being at all familiar with KS, I can’t critique it, but will simply a raise question mark over the idea of converting from a spiritual/physical exercise to a religious tradition. In doing so, Frank seemed to suggest that his preferred form of yoga (there are many) is itself a religion.

And, for the hell of it, I’ll point out that Mr. Frank didn’t bother to distinguish between his favorite form of yoga and other yogic disciplines in his essay.

Moving on, Frank restated his credentials as a reformed yoga guru at the top of his essay, just so you know he has Experience on his side. Of course, Experience isn’t always the most reliable teacher. In “Shedding Baggage,” another of my essays since scrubbed from Catholic Answers’ web site, I noted that sometimes Experience can create bias that makes the “expert” incapable of objectivity. Catholics may remember the Harry Potter brouhaha of the early aughts. A startling number of the Christian (and Catholic) writers blasting J.K. Rowling’s fantasy series as “satanic occultism” were themselves converts from the occult who fancied themselves Experts on literary fantasy magic because of their experience with witchcraft and the New Age.

Space prevents me from taking apart this essay line by line, however entertaining that might be, so I’ll limit myself to a few observations on the differences between my 2012 essay on yoga and this new Catholic Answers Answer.

Bodily postures. Frank and I both discussed the controversy over whether moving the body into certain poses involves the practitioner in forms of non-Christian worship. Frank suggested that postures have specific intrinsic meaning and that they “aim to awaken kundalini, energies of the soul, associated with the Hindu gods.”

In my own essay, I wrote, “This assertion shades into superstition, ascribing magical effects to a physical action based solely upon its external performance (cf. CCC 2111)” and used the example of the Christian prayer posture of kneeling to distinguish between action and intention. A kneeler could be praying, yes. Or he could be weeding his garden, rooting for lost change under the sofa, or proposing marriage. Many of the postures in yoga are complicated and hard to imagine having other uses. But Tadasana, commonly called Mountain pose, looks very similar to an officer standing at attention. What’s the major difference? The yoga practitioner is moving his body into alignment from the top of the head to the heels of the feet. The officer is awaiting orders.

My description of Tadasana’s purpose is rather vanilla compared to Frank’s descriptions of the poses he chose to spotlight. Warrior pose “imitate[s] the sequence of the murder” [of Shiva’s father-in-law]. Two poses Frank doesn’t otherwise describe were named for Hindu gods, Frank said, and they “used their occult powers to commit theft, adultery, fraud, rape by deceit, corpse desecration, the murder of Matsyendra’s son, and cross-dressing.” He said Goddess pose invokes “the dark goddess Kali, known for making clothes out of the body parts of slain enemies. Yoga devotees sacrifice children to her in India to this day.”

Gee. And I thought Women of Grace’s critique from back in the day was overwrought.

Prayer techniques. One of the significant critiques I offered about yoga and its compatibility with Christian spirituality was that it’s a technique used to bring the practitioner into contact with the divine. I quoted the Doctrine for the Faith’s Aspects document, which noted that “Christian prayer … flees from impersonal techniques or from concentrating on oneself.” I also commented, “For the Christian, prayer is an unmerited gift. There is effort involved, but no specific technique will ensure us a productive result.”

It should be uncontroversial to say that the system that gave rise to yoga, including the poses, honors Hindu gods and aims to spiritually yoke the practitioner to them. Meanwhile, Scripture tells us that “all the gods of the Gentiles are idols” (Ps. 96:5—older translations read “devils” instead of “idols”), and the Church takes a strong stance against idolatry (Exod. 20:1-4; CCC 2110). It is unlikely that many Catholics would rush to a gym to perform the “Ba’al lunge,” yet the “idols” or “devils” of Hindu spiritual practice get a shrug of the shoulders.

In Nostra Aetate, the Council said of Hinduism: “Men contemplate the divine mystery and express it through an inexhaustible abundance of myths and through searching philosophical inquiry. They seek freedom from the anguish of our human condition either through ascetical practices or profound meditation or a flight to God with love and trust” (NA 2).

This used to be the approach Catholic Answers took in explaining and promoting the Catholic faith. While defending Catholic distinctives, staff apologists were expected to be temperate in their critique of non-Catholics. The apostolate prided itself on giving well-researched answers in a calm, gentle fashion, free of demagoguery. Whether we always succeeded is up for debate, but that was the goal.

These days, Catholic Answers prefers to allow its writers to describe followers of a major world religion as “honoring murderous gods,” to warn ominously of “opening ourselves up to yoga’s spiritual beliefs,” to engage in demagoguery by recounting “gruesome details” of Hindu legends.*

*See the footnote in Alexander Frank’s essay. I can only suppose Mr. Frank, as a baby convert, has yet to familiarize himself with some of the “gruesome details” of Catholic hagiography, such as saints murdering their spouse’s killers, confiscating the property of non-Christians, and acting as satanic priests. Not to mention the martyrs who were skinned, shot full of arrows, had their eyes plucked out, their hands mutilated, and their breasts chopped off.

June 28, 2022
Pro-Lifers and the Case of the Invisible Woman
Next Post 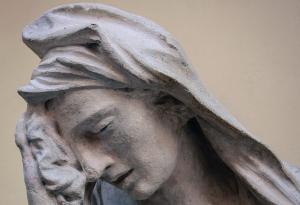