Hello again, beautiful creatures… and a special welcome to those of you who are just joining us, possibly after having read my previous couple of posts about gender essentialism in esoteric spiritual traditions. I realize that, on the basis of those posts, some of you may have the impression that I’m a dour, humorless feminist and pseudo-intellectual out to abolish gender and ruin everybody’s fun. I’m here to promise you, that’s not the case. I mean, I do have another post about gender in Paganism in the percolator—another few posts, actually—but I’m going to try to restrict the heavier stuff to no more than once a week. That’s in part an act of self-care; the more serious posts are harder to write, both intellectually and emotionally. Sometimes, though, I just want to have a little fun with the blog, and invite you along for the ride. As much as I love talking about gender and sexuality in magic, I also love getting weirdly nostalgic about pop culture and engaging in random, debatably-appropriate autobiographical rambles.

In case the title didn’t give it away, this will be one of the latter sort of posts. If that’s uninteresting to you, I shan’t complain.

As I’ve written previously, I first encountered the notion that witchcraft and sorcery had been real things that real people had done by discovering books on magic, first on my mother’s bookshelves, then in the stacks at my local library. My first in-person contact with a real-life Pagan came not long afterwards, when I was in the fifth grade. This was the year I injured my left knee in a basketball game as part of a misguided attempt at fitting into my peer group, so they would quit beating me up. I was on the playground one day, not playing basketball or getting beaten up, just keeping to myself as usual. My class had a substitute teacher that day: a young woman, blonde and pretty in a vaguely hippie-ish way, though still professional enough to pass muster in a public school in early ’80s central California. I don’t recall how, but we wound up in a conversation about Dungeons & Dragons. I may have been walking around reading a D&D book, as was my wont at the time, or she may have struck up a conversation about my interests and drawn out that I was a D&D geek. It may also be that I was somewhat obsessive at that point in time, and had literally nothing else to talk about with a total stranger. In any event, the subject of druids came up, and I stated, with the iron-clad certainty of the very young, that there were no more druids in the modern world.

“Because I am one,” she murmured, softly, for my ears only.

I was floored. If she was telling the truth, if there really were druids—and witches and magicians, perhaps?—still kicking around at the tail end of the 20th century, then everything I thought I knew about history, mythology, and religion was a tower of lies, one she’d just struck with a lightning bolt. (Possibly on loan from Zeus, negotiated through the Dagda.) I felt like I’d just been granted a glimpse behind the veil of a vast, mysterious world, and I wanted in. Oh, how I wanted in. I wanted to ask her so many questions: How is this possible? What does that even mean? How do I learn more?

Sadly, the recess bell rang right at that moment, and we all filed back into the classroom to re-immerse ourselves in mundanity.

I remained immersed in that public mundanity… well, as mundane as I could tolerate. I was, after all, the weird kid in school. I would muddle through the day as best I could, dodging verbal abuse and the occasional punch thrown my way, and retreat to the refuge of role-playing games and SF/fantasy paperbacks at home. I would wonder idly about that conversation from time to time, but for the most part, I stayed hidden in my own private world. Music began to factor into that world as well: progressive music, heavy music, music with depth and complexity and a certain inexpressible something to it. I didn’t yet have a name for what that something was. I’d first heard hints of it as a child raised on the Beatles, that merry band of psychedelic pop pranksters. Later, I began to pick up that thread in bands like Led Zeppelin, Pink Floyd, Heart, Kansas, and others. As I grew older, I followed that curious thread to other bands: Rush, Marillion, Iron Maiden, Black Sabbath, and more… but those all came later. For now, let’s stay nestled in the mid-1980s, cozied up with Gary Gygax and Elric of Melniboné.

A curious thing happened at this point in my life: my family moved from the moderately liberal, left-leaning Central Valley of California to upstate South Carolina.

I spent the first year of my time in South Carolina very, very alone. My multiethnic family were incomprehensibly alien outsiders in a culture whose social hierarchy was based on race, religion, heritage, and income. I found myself dumped into a junior high school environment where I knew no one, and where every facet of my history and experience was irrelevant at best, and damning at worst. Faced with a daily gauntlet of mockery, incomprehension, and threats of violence, I withdrew even further into my inner world of fantasy novels and role-playing games. I imagined escaping to some magical land where people like me weren’t alien, weren’t beaten, weren’t mocked and humiliated. I imagined myself with friends. I even dared to imagine myself with a girlfriend, a lover. I imagined myself happy.

And then, at a local hobby shop (which doubled as my Friendly Local Game Store), I met a group of People Like Me. They were older—almost all of them adults—but they were nerds, geeks, outsiders. They were fans of Star Trek, watchers of anime, readers of books, players of games. Moreover, they were outsiders in other ways as well. Most of them were atheists or agnostics, but a small handful of them were actual, for-realsies Pagans. Similarly, while most of them were straight, some of them were queer in one way or another. Even more remarkable, everyone was accepting of that queerness. It would’ve been unthinkable to not be. We were, after all, a small band of freaks surrounded by hundreds of miles of reactionary, politically-charged Protestant Christianity of the sort that hated “the Other,” a category which included people of color, queers, agnostics, heretics, non-Christians, and socially awkward nerds like us. All we had to cling to was one another. And cling we did.

It is, perhaps, little surprise that my first formal introduction to magic came during this same period of my life.

One of the folks in this same circle of friends ran a used bookstore. We’d congregate there sometimes to watch movies, play computer games, and just hang out in a safe space surrounded by books. On my first visit to the bookstore, I noticed a high table in the back room (probably a dresser, come to think of it) covered with a satin cloth, set with a variety of curious objects: candles, a wine glass, a black-hilted Ka-Bar style knife, and what was clearly a wand of some sort. I knew nothing about magic other than what I found within the confines of fantasy novels and D&D gamebooks, but even I could put two and two together, so I approached the shopkeeper and asked him about it.

“Why do you ask?” he responded.

He thought about it for a moment, then left the room, returning a moment later with a couple of books. “Here, read these,” he said, handing them to me.

They were, of course, Drawing Down the Moon and The Spiral Dance.

I read those books with the kind of ravening spiritual hunger only the adolescent can truly muster, an intellectual and emotional craving which consumed me. In those pages, and in the context of my fellow weirdlings, I first found a spirituality which spoke to me, one which embraced both my burgeoning queer sexuality and gender and my desperate desire for community, safety, power, and freedom. It wasn’t a religion, exactly, but it was something that spoke to that same space in my heart, and told me—for, perhaps, the first time in my life—that I was worthy, worthwhile, and beautiful. I was dust and ashes, I was meat and bone, but I was also filled with sparks of the smokeless fire that lives at the heart of stars. I was spirit and flesh, not either but both. Both were beautiful, messy, sexual, and real.

And thus it was that I took my first faltering steps along the Path of the Wise, the Crooked Path of witchcraft and sorcery.

So, how did you all find your ways onto your path, whatever it may be? Feel free to comment below, or on the Facebook page.

Until next time, dear ones, keep telling your stories, and keep singing your songs. ♥ 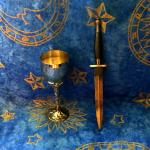 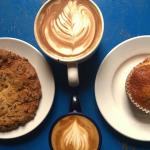 September 18, 2017 Clouds in My Coffee: Addressing Some Criticisms, and Offering a Few More
Browse Our Archives
get the latest from
Outside the Charmed Circle
Sign up for our newsletter
POPULAR AT PATHEOS Pagan
1

No, That's Not An Odal Rune
The Zen Pagan
Related posts from Outside the Charmed Circle