Previously on Outside the Charmed Circle, I gave a brief definition of gender essentialism and talked about why it’s a bad thing, complete with an example ripped from the headlines. I also made a few less-than-kind comments about right-wing Christians, TERFs, and people who think gender studies is “Marxist,” and closed on the admittedly cliffhanger-y claim that the toxic views on gender held by a hard-right Christian blogger are virtually identical to the views held by many people in our communities.

This week, I get to back that claim. It’s a pretty bold claim, after all… in fact, it’s two claims.

The first claim is that gender essentialism is an abusive ideology which imposes oppressive strictures on everyone, one which is directly linked to sexism, misogyny, homophobia, and transphobia—and, therefore, to physical and psychological violence. This claim has been addressed far better, and at far greater length, by theorists whose satchels I’m not fit to unclasp. Rather than recap their work more than I already have, allow me to direct you to this capsule summary on the topic and the Geek Feminism wikientry on essentialism, which includes several excellent links for further reading.

The second claim is where the core of my concern lives: the gender-essentialist thread which runs through many of our spiritual paths and practices, woven into the motley tapestry of these esoteric traditions. I’m claiming that, left unchecked and unexamined, this ideology both constitutes and contributes to toxicity in our traditions, our communities, and our personal spiritual and emotional lives.

Even this more narrowly-focused claim covers a lot of ground, though, and we have a limited amount of space and time to cover it. So, let’s talk.

Opening a Discourse about Gender Essentialism, and Other Cans of Worms

Let’s talk about “masculine and feminine energies,” shall we? (Or, perhaps, “passive and active polarities?”)

Let’s talk about the gendering of the sephiroth in the Tree of Life, or the cards in the Tarot, or the tools on our altars—athames for boys, chalices for girls, amirite?

Let’s talk about the assignation, not only of gender, but of modern gender roles to the gods and spirits with whom we work, play, and worship.

Let’s talk about the ways in which theologies of gender, explicit or implicit, have become a metaphorical tool for excluding anyone who fails to fit into our gender-essentialist definitions of “women” or “men.”

Let’s talk about the explicit gender roles practitioners in certain traditions are expected to play, or be cast out as aberrations, abominations, and “not the right kind of people.”

Let’s talk about the extent to which our communities have made themselves not only unwelcoming, but downright hostile to queer and trans people, women and men and others.

Let’s talk about the misogyny among certain groups of (mostly) white, cisgender gay men who are more than happy to honor the Witchmother, then turn around and slag off flesh-and-blood women as “breeders.”

Let’s talk about the cisgender women, of any orientation, who exclude transgender women from women-only spaces.

Let’s talk about the men who make women-only spaces a survival need for all women, cis and trans.

Let’s talk about the interlocking sexism, misogyny, homophobia, and transphobia of our communities, and the ways we justify those forms of hatred by appealing to personal histories, spiritual authority, “tradition,” and gender ideologies dating back to the 1950s—or to the 1550s.

All of these attitudes and approaches have their roots in gender essentialism: the notion that women are this way, men are that way, and anything which contradicts or transcends that binary is somehow abhorrent. I could write an article about each of those “let’s talk” concepts… and over time, I probably will. For now, let’s consider this an opening salvo or broadside, a starting point.

Getting Specific with Critiques, and Other Occupational Hazards

“But Misha,” some of you protest, “some of that isn’t oppression! It’s just how people practice! Those are their traditions you’re talking about! Aren’t you being unfair, intolerant and hypocritical?”

Maybe so. Allow me to raise a couple of points, though, before you write me off.

While my primary mode of practice is as a witch and sorcerer within the Anderson Faery tradition, I’m also a 3° Gardnerian initiate1, among other things. Gardnerian Wicca is one of the most strongly-gendered traditions of witchcraft around, as well as being fairly well-known, which makes it an easy target. If we expand our terms to include all of the traditions of witchcraft informed, influenced, or inspired by Gardnerianism—and let’s be clear, we’re talking about anything which calls itself “Wicca” at this point—it’s the biggest target in the Neo-Pagan world. It would be easy and obvious to single out Wicca for the gender essentialism woven through its theology, cosmology, and praxis: the dyadic theology of Mother Goddess and Father God, the so-called “symbolic Great Rite” with athame and chalice, the actual Great Rite with (cis male) penis and (cis female) vagina, the gendering of degree systems in some traditions, the “polarity” model of magic common to many iterations of Wiccan practice, and so on. However you want to slice it, most forms of Wicca, even neo-Wiccan offshoots with no direct ties to Gardnerian Craft, are basically The Witch-Cult in Western Gender Roles.

However, Wicca (including its offshoots) is hardly the only tradition to promulgate a gender-essentialist theology, nor even the most egregious example to hand. That whole “let’s talk” list up there? Notice how little of it is specific to any one tradition or practice. There are “traditional witches” who’ve built whole traditions (and careers) out of Not Being Wiccan, some of whom have genuinely odious ideologies built around gender. Along another axis, we can find “radical feminist witches” practicing something which looks suspiciously like Wicca with the Y chromosomes filed off, whose theology is entirely built around an essentialist notion of gender starring a monotheistic Goddess as the Giant Yoni of the Universe. Looking beyond witchcraft, we could spend several blog posts discussing the notorious misogyny and homophobia (along with a host of other problems) to be found in the works of Aleister Crowley, which modern iterations of Thelema are still attempting to work through. Less notoriously, we can look at the absurdly constrained gender ideology of Dion Fortune’s Esoteric Philosophy of Love and Marriage, which is a bit of a Victorian howler in this regard. If you’d rather take on something a little more modern, let’s talk about the extent to which some modern “magickians”—most of whom are men, strangely enough—seem to be obsessed with their own penises and the fluids they emit. (Or, y’know, we could just… not.)

If you’d like your sexism, homophobia, and transphobia a little more folkish, we can turn to the thunderously ill-informed he-man gender ideologies to be found in certain reconstructionist groups, including—though hardly limited to—some of the Nordic polytheists. The notoriously racist knuckle-draggers of the Asatru Folk Assembly, for instance, like to advertise their strain of white-supremacist Norse religion with charming photos of white men protectively cradling their white wives, who are often in turn protectively cradling their white babies… wait, why does that sound familiar? Oh, right! 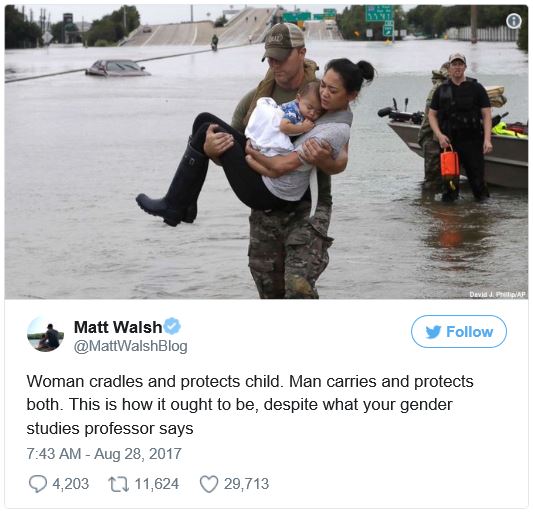 A Human Problem, with Human Solutions

No, I’m not accusing Matt Walsh of being a white supremacist. I’m saying that he shares with the racist dolts of AFA a set of similar, and similarly toxic, ideas about gender.

Gender essentialism isn’t “a Wiccan problem,” nor even “a Pagan problem.” It’s a human problem, one which plays out in every culture2 that buys into its assumptions. It’s neither unfair nor intolerant to critique those assumptions, or any theologies, cosmologies, and forms of praxis which employ them… especially our own. In fact, I would suggest that it’s incumbent upon us to do so. It would be unfair to single out Paganism, polytheism, and the occult for special opprobrium and biased critique, but that’s not what I intend here. On the contrary, I want to suggest that all of our traditions exist in a cultural context which virtually guarantees they, and we, will have some deeply toxic ideas about gender and sexuality. The critiques I’ve levied above are admittedly harsh, but I submit that they arise from a place of respect. If I didn’t think our spiritual traditions were worth careful consideration, analysis, and critique, I wouldn’t bother practicing them in the first place. If esoteric spiritual traditions are to have any place in the 21st century, we need to be able to approach them with both reverence and rationality, cherishing and developing their strengths while also acknowledging and working on their weaknesses. To do any less would be dishonest and avoidant, neither of which—last I checked—were considered virtues in any tradition of Paganism, polytheism, or magic of which I’m aware.

In other words, I’m not here to attack anyone’s traditions or practices, nor am I here to abolish gender or polarity3. I’m here to suggest that we can do better, that we can be better, both as practitioners and as human beings.

And in order to reach that better place, we have to start by knowing where we are.

In the next few blog posts, I want to talk about where we are. I plan to address some of those specific “let’s talk about” items above, and to suggest some ways forward from here. For the moment, though, I want to end with the first item on that list of suggestions, which is simply this: Let’s think about our practices and traditions analytically, even critically, when gender comes into play. What do these things we say and do mean? Why are we assigning gender to these roles within our practices? Who is included, and who is excluded? What messages are we sending—or not sending? And, most importantly, are these the messages we want to send?

See you next time. ♥ 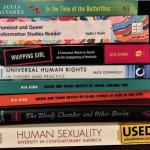 September 7, 2017
"How It Ought to Be": The Problem of Gender Essentialism
Next Post 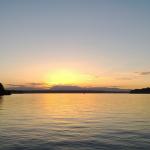 September 14, 2017 Meeting My First Pagans: An Autobiographical Interlude
Recent Comments
14 Comments | Leave a Comment
Browse Our Archives
get the latest from
Outside the Charmed Circle
Sign up for our newsletter
POPULAR AT PATHEOS Pagan
1

Subtextual Healing: Trauma and Genre Television
The entire recent season of "Star Trek: Discovery" is an allegory for...
view all Pagan blogs
What Are Your Thoughts?leave a comment

14 responses to “Tracing the Thread: Critiquing Gender Essentialism in Paganism, Polytheism, and Magic”