We’re Just In It for the Money 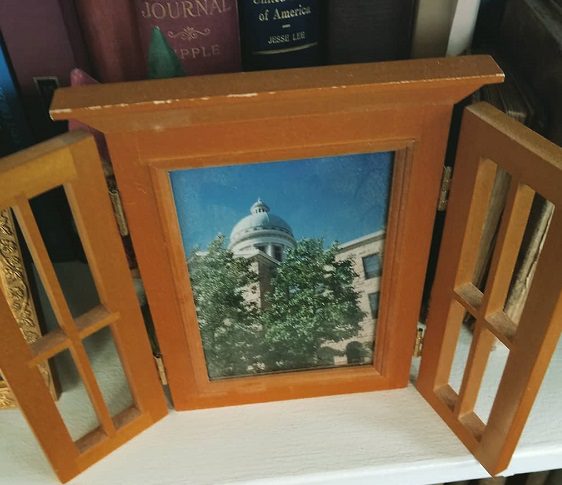 Long ago, I was a college student (here.)

We had an humanities program called Presidential Scholars. (We all, from the greatest to the smallest, called it “PreSchool” as a nickname, which leads me to occasionally make alarming statements to my husband now such as “When I was reading Nietzsche in preschool….”) It was everything you’d want such an honors program to be, or at least would have wanted it to be in the late 1980s. It was a two-year sequence of courses, all team-taught, organized not by chronology or discipline but around the great questions of life as considered by the Western canon (let me add that this canon was very broadly conceived and by no means all dead white guys). In our junior year, we capped it off with a course about a non-Western culture (Japan in my year – I first read the Tale of Genji there.)

The courses on “Suffering, Death, and Endurance” and “Community and Covenant” in particular changed my life. But they were all marvelous. We put Socrates and Stephen Hawking in conversation with each other. I read Elie Wiesel, Hildegard of Bingen, Alice Walker, Benedict’s Rule – life-changing encounters, each one. I am not exaggerating to say that my last three decades of life have been unutterably different because of those classes.

This humanities program was not an opt-in for those who might choose to go through this liberal arts education on steroids. Everyone who got the highest level of scholarship offers from the school was enrolled in the course – whether they were in humanities or scientific fields. English majors, biology majors, pre-med, music performance, theater, Spanish, psychology, geology – it did not matter. Augie has always been a school that was clear about its liberal arts mission, and so here was an attempt to truly infuse liberal arts thinking throughout the curriculum and bring different disciplines in contact with each other. Right. Right? 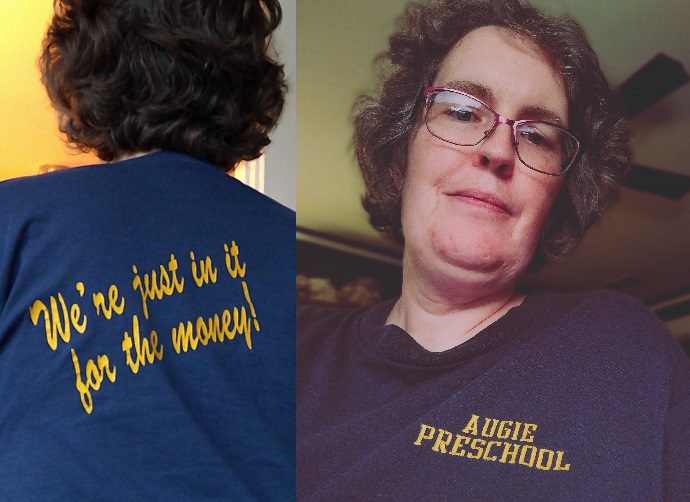 Well, two of my classmates – my memory says they were a psychology and pre-pharmacy major, but memory may be faulty – decided it would be funny to get a shirt printed that said exactly what they thought of this idea: “We’re Just In It for the Money.” (This was the late 1980s. It was a lot harder to get messages printed on shirts. You had to really want to.) Humanities are all well and good, but scholarships are the tickets to degrees and careers, right? (See photos.)

They printed them off, sold them inexpensively to all of us, and got in profound trouble.  A few years after I graduated, Augie decoupled the scholarships from the humanities program. You can still get a Presidential Scholarship at Augie, but no one makes you think about Benedict’s Rule while you do.

Today I pulled the shirt out of the closet (I’m a historian, I have my 34-year-old shirts nicely preserved), put it on, remembered this, and thought of an excellent recent blog post by Chris Gehrz, the Pietist Schoolman, about St. Mary’s University in Minnesota phasing out its liberal arts majors while still saying it was a liberal arts school.  (I also thought of the memorable moment 12 years ago when my husband was a professor at Huntington University and I posted on Facebook: If I hear one more tour guide come in the door downstairs and begin their spiel: “This is Loew-Brenn Hall. Huntington is a liberal arts college. In this building we have religion, history, English, psychology, social work, and education,” I swear I’m going to lean over the balcony and ask them if they’ve ever heard the term “social science.” But I digress).

Now, despite the failure of this noble experiment, Augie is and remains a liberal arts school. Unlike St. Mary’s, it has not cut its liberal arts majors. (You can even major in Scandinavian studies. Long story.) In all honesty, the alums I keep in touch with, or see on Zoom events, or get interviewed in the alumni magazine, appear to have thought deeply about the questions of life Gehrz proposes  – even if they are geologists or accountants or pharmacists or psychologists. All stories are complicated. So is this one.

I guess that’s my point, actually. The contemplation of the great questions of life and the need to make a living are intertwined in inexplicably complicated ways. Always have been. Making a living does not mean making a killing, though the two get mixed up a lot; and the liberal arts shouldn’t just be a privilege of the elite, but they often have been. What all of this means is twofold. First, we badly need to solve the problem of the divorce between ends and means in education – a problem that didn’t arise overnight. And secondly, doing so will be a lot harder than we think.

Images: Unsplash, and me. 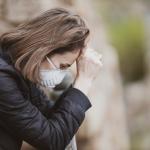 September 5, 2022 From His Own Fullness All He Takes Away
Recent Comments
0 | Leave a Comment
"Amazing post thanksBest Leather Phone Cases"
seller actions Riverdance Changed My Life: Or, How ..."
"Thanks for sharing this nice postcustom software development"
seller actions How to Succeed as an Influencer ..."
"Thanks for sharing keep it upAmazon shipstation automation"
seller actions The Business Crisis Donald Trump and ..."
"There have been many studies about the best environments for work/creativity/productivity but management usually follows ..."
John Purssey Why I Don’t Like Open Offices
Browse Our Archives
Related posts from MISSION:WORK