Sometimes I wonder why I even browse CNN.com anymore. However, it does tend to make for a good story for MMW each week 🙂

This story about an Iraqi woman being detained because she is an alleged suicide bomber is pretty ridiculous….more so than what I’m used to seeing on there. Anytime mainstream news sources cover the ‘phenomenon’ of female suicide bombers, they regard it just as such: a PHENOMENON. Like it is impossible for women to be violent? Like women are only violent when they are avenging the deaths of the men in their lives? God forbid that women have their own political motivations for engaging in militaristic actions to prove a point.

I don’t condone suicide bombings…obviously (well, I hope it’s obvious, at least. I’m an anti-violence worker!) But, like many progressive-minded people who try to think outside the box, I do think that instead of viewing the bombings as independent acts of violence, we should try to understand what we can do to limit the violence besides demonizing an entire culture.

Now that the disclaimer is out of the way… 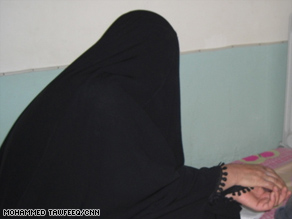 To be honest, I didn’t even read the headline of the story until I finished the actual article. After I saw that the headline was “Iraqi mom ridicules cops over suicide bombings”, I thought it seemed a bit sensational, to say the least. The article is supposed to be about a woman, Umm Omar (pictured left), who is accused of being an aspiring suicide bomber. The writer is sitting in on an interrogation of this woman. The evidence presented is a letter addressed to Umm Omar saying that her sister, Fatima, carried out God’s wishes as a suicide bomber and thus she should, as well.

Anyone who knows anything about names in the Middle East knows that Umm Omar means ‘mother of Omar’. Furthermore, Fatima is one of the most common Muslim names out there. (Hello! My name is Fatima and my older brother’s name is Omar! I mean, it’s REALLY common). That letter could be addressed to half of the Muslim population! Frankly, I think that CNN really needed a sensationalist story on Muslim women being violent.

But beyond my superficial frustrations with the article (though I’m still really annoyed about the names…) there are deeper issues at hand here. Why is it that Muslim women are either portrayed as weak and oppressed or demonized as terrorists and violent people? And why are all of these perceptions of us based on the MEN in our lives?

The article said that most women who are suicide bombers are doing so because they have lost their fathers, brothers, and sons, and that they must avenge their deaths. REALLY? Well…then why are the men doing it? Are Muslim women really that daft and weak-minded that they can’t even make the decision to kill themselves on their own – it has to be because of the men in their lives?

Some people might say that I am looking into this too much. I can sense those responses in my future. But I think that our perceptions of the world are strongly influenced by the subtleties and nuances of the media – it is the things that we don’t even realize are there that are hitting us the hardest. Even though the image of Iraqi Muslim women is painted as both oppressed AND violent in a subtle way, it is still very powerful and harmful for us.

It scares me that the war in Iraq was started with a lot of talk about liberating the Iraqi women from the tyrannical powers of Islamic law. A lot of people supported the war in the name of women’s rights. So when articles like this about Iraqi women are published, how do you think it informs public opinion on the war?

You can see the video of CNN’s Arwa Damon interviewing Umm Omar here.

August 25, 2008
By the Pound: Racism in the Wrestling Ring
Next Post