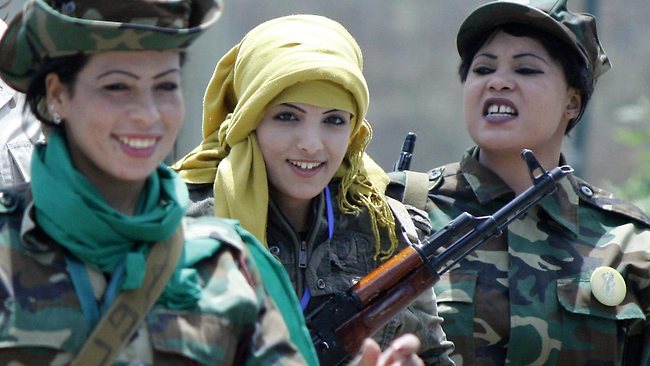 Gender roles are nowhere more prominent than in war, as we see male political and military leaders taking the most visible roles in armed conflicts, promoting the tendency to see the capacity to inflict violence as inherently male. During the six months of Libya’s revolt, amid stories of women working in hospitals and sending food to the fighters, the stories of women who have ventured into the frontlines, like Fawzia Al Ferjani, have been few and far between. Tellingly, the fact that women were again out on the streets in Tripoli, including coming out in force for a celebration in the renamed Martyrs Square, were reported as signs of normality.

Since the opposition entered Tripoli, however, there have been a number of interviews with women formerly employed as guards and fighters by the Gaddafi regime, reports previously limited to the evidence of women’s IDs at the frontlines and rumours of female snipers and mercenaries.

A few days ago Al Arabiya interviewed Amira, a young woman who studied at the police officers academy before joining Gaddafi’s Revolutionary Guards, and her sister Inaas, who studied at the same academy and appeared wearing niqab. Amira, who resigned from her post before the uprising began, said that the job attracted poorer women who wanted a policewoman’s salary, and said she had decided to join the Guards because: “I wanted to work and do something, so I had to join the Revolutionary Guards after I could no longer get into the police academy.” In a longer version of this interview,  Amira pointed out the irony of promoting equality through military training, given Gaddafi’s obsession with classifying people by tribe, race and region, and gave an account of being one of only 4 women among 600 men at the academy which comments on the failures of the strange form of feminism Gaddafi espoused.

The prosaic Amira is a contrast to the seeming ideological fervor of one of the most visible faces of Gaddafi’s regime, Hala Misrati, a newscaster on state TV. In an Asharq Al-Awsat article on “The rise and fall of Gaddafi’s mouthpiece,” Khaled Mahmoud noted that Misrati was not

your typical television presenter working at an ordinary television station; she was the spearhead of a huge pro-Gaddafi propaganda campaign. However, Misrati was not just popular among the pro-Gaddafi crowd—the bullish television anchor and her outlandish reporting style also strangely fascinate the Libyan rebels and their supporters.

Misrati achieved notoriety back in May when she denounced Eman al-Obeidi as a liar. She also famously questioned the Syrian Tripoli-based journalist Rana al-Aqbani on her program, grilling the arrested woman about her supposed support for the opposition. Misrati again gained international attention when she brandished a gun on Libyan TV, grabbing a gun from the top of the anchor desk as news reports said that rebels were advancing toward Tripoli. It is interesting to compare this with a similar incident back in March, when another Libya state TV anchor, this time a man, clutched an AK-47 during his “pro-Gaddafi screed.” At the time, a clip appeared on MSNBC’s “Way Too Early,” amid jokes about impartiality and the ethics of journalism, but coverage was nothing compared to Misrati’s “gun-brandishing” video, which quickly went viral, for reasons perhaps best summed up in this quote:

“In a remarkable snippet of video, a female news anchor on Libyan state TV brandished a gun and vowed hysterically that she and her station would not be taken alive.”

Misrati’s outlandish rhetoric and actions has led to ridiculing reminiscent of that meted out to the infamous former Iraqi Information Minister Mohammad Sahhaf–except that  as a woman even her  threats of violence are “hysterical,” an adjective not applied to the male anchor clutching the AK-47.

Misrati was later captured by rebel fighters, and in a telephone conversation uploaded to Facebook, reportedly stated:

“Libya is not just for Muammar or anybody else…Libya is above everybody.” She also stated that she had surrendered herself to the Libyan rebels because they are “polite” and “decent,” adding that they had treated her well. She stated, “I saw that they [the Libyan rebels] are Libyans…decent people.”

This change of heart will not be as easy for 19-year old Nisreen Mansour Al Forgani, wincingly dubbed “Gaddafi’s Girl Executioner,” who has admitted to shooting 11 rebel prisoners. This story has gotten most attention in the Western media,  the only mentions of it in Arabic press seem to be excerpts translated from The Daily Mail article, an article largely preoccupied with highlighting, in sensationalist fashion, the incongruity of  Al Forgani being a serial killer: “First you see her large brown eyes and rosebud lips, framed by a pink headscarf. Then you notice that her bruised feet are secured by manacles to the foot of her bed.”  CNN’s Arwa Damon similarly describes her as having “soft features, warm brown eyes and full lips.”  Throughout, we are prompted to ask: Why would or how could a woman,  “a pretty 19-year-old” no less, do this?

There are a number of disturbing assumptions within this question: First, it implies the fact a woman killed 11 prisoners in cold blood would not be as starkly inconceivable if she were older and/or uglier. Second, this shock at the idea of a “girl executioner” can only be based on an assumption of female moral superiority: women don’t execute people. Third, in its focus on the incongruity of female violence it naturalizes male violence. If Nisreen were Nasser, would this article have been written?

In providing motivation for “the deployment of Nisreen as executioner,” The Daily Mail gives the reasoning that in “Libyan culture” it is an insult to be killed by a woman.

There is a saying in Libya: ‘Cut my throat but do not get a girl to shoot me in the back.’ One suspects that the deployment of Nisreen as an executioner of ‘traitors’ was meant as a final insult to the condemned.

As a Libyan who has never heard of such a saying, I can only wonder whether the “traitors” would have cared. One suspects that the fact of execution made the gender of the executioner less than relevant. Yet, according to Nisreen’s story she was forced at gunpoint to shoot the prisoners:

despite her killings, it is impossible not to feel pity for her. Nisreen claims – and her doctors and even some of the rebel fighters believe her – that she had to shoot under great duress. She also says that she was sexually abused by senior military figures, one of whom was the commander of the elite Tripoli brigade tasked with protecting Gaddafi himself.

Nisreen’s claims are similar to stories told by other female recruits and bodyguards who said they had been subjected to systematic sexual violence. Like her, their stories have been questioned, on the basis of the logic that the ousted Libyan leader would not have entrusted his life to a group of abused women. As Diana Mukkaled reminds us however, logic has little to do with rape, and these women’s stories need to be heard.

Nisreen, both a victimizer and victim of the Gaddafi regime, is a haunting reminder for many Libyans of the story of Huda Ben Amer, known as Al Shanaga (“The Executioner”), a vehement Gaddafi supporter whose corruption and hunger for power made her a figure equally hated and feared.  Her gruesome nickname was earned when she was a young woman, and keen to earn a name with the regime.

Her moment came at the public hanging of one of Gaddafi’s opponents in 1984. Ben Amer rushed forward as the unfortunate man dangled from the rope, wrapped her arms around his body and used her weight to pull down until he was dead. That stomach-churning performance won her Gaddafi’s attention, and Ben Amer rose to become powerful, rich and twice mayor of Benghazi.

Between them, Huda Ben Amer and Nisreen Al Forgani tell two sides of fighting on Gaddafi’s side, and reflect stereotypes that often come into play when it comes to violence perpetrated by women: the sense that is something inherently more shocking about women as aggressors. Al Forgani is the “Girl Executioner” and Ben Amer the “Devil in female form” – because evidently the Executioner and the Devil require qualification when applied to females. Women are deemed to posses an innate aversion to violence, as a supposed by-product of their mothering/nurturing nature. Despite notions of gender equality, violence by women remains so inconceivable that it leads people to believe that any woman who kills must have done so as a result of duress or madness, compelling the ironically un-empowering explanation that women aggressors are always themselves victims, merely pawns in someone else’s violent game.

While Virginia Woolf once said that “War is not women’s history,” the stories of Amira, Hala, Nisreen and Huda remind us that as Will Rogers put it: “There has never been anything invented yet, including war, that a man would enter into, that a woman wouldn’t, too.”  Violence as a strategy for resolving conflict, and the manipulation of gender ideology to support such violence, have always been a part of women’s history, though the stories of women are not always told.