Back in 2010, I was so excited for the chance to review G. Willow Wilson’s memoir The Butterfly Mosque, where she explored her move to Egypt, conversion to Islam, and relationship with her husband. Here’s what I had to say about The Butterfly Mosque in 2010:

Muslim women are presented in an Islamic society not as subservient to patriarchal culture, but instead as strong, empowered individuals capable of deciding how they lead their lives within a religious and cultural framework.  That the memoir presents an affirmative representation of Islam from an American Muslim woman’s perspective makes for an important contribution to the growing body of work by contemporary Muslim authors.

I was just as excited to recently read Wilson’s new book and first novel, Alif the Unseen, and quickly made my way through it over the course of a weekend. The book tells the story of an Arab-Desi hacker, who goes by Alif in the computer world and through most of the book, and his adventures on the run from a state surveillance official, known to the hacking world as The Hand, who discovers:

Along the way, Alif crosses paths with state security officials, fellow hackers, a myriad of jinn, an American PhD student, a sheikh, and a prince in an unnamed Arab state. Oh, and the young woman from next door, Dina, he grew up alongside, who sticks with him throughout the journey. The book interweaves Islamic spirituality, computer hacker realities, political chase and imprisonment, notions of personal identity, romance, and the world of the Unseen throughout.

With me so far? I found the book to be a mind-boggling adventure in the best of ways, and I was always uncertain of where Wilson would bring the story next. Alif’s wildly different storylines mirror Wilson’s own diverse interests. Wilson has a short note at the beginning of the book that explains her reasons for writing the book (you can read a part of the same note from the book at Wilson’s blog):

“I’d spent years being frustrated by two things: one, the fact that I was so often forced to speak to my three primary audiences (comic book geeks, literary NPR types, and Muslims) separately…The second thing was the mainstream media’s insistence that blogging and social media were no big deal and politically would amount to nothing, especially in the developing world.”

In breaking away from feeling pigeon-holed into addressing specific, static audiences and bringing the importance of the online medium to the forefront, Wilson crafts a novel work of fiction that is satisfyingly fun to read and that successfully defies the exact frustration she writes about in her preface to the book. The New York Times’ recent list of summer reads calls Alif “this year’s improbably charming book about hackers.”

Along with my overall review of the book, I would be remiss to not discus how women are portrayed in the novel (this is MMW, after all). Wilson surrounds Alif with a solid cast of supporting characters—many of whom are highly empowered women.

Dina, Alif’s next-door neighbor and friend, travels with Alif throughout the entire story. She happens to wear niqab of her own choosing (over the protests of her family). Dina’s defiance of social convention (ranging from wearing niqab to accompanying an unrelated Alif), courage, wits, and spirituality save both herself and Alif (at times referred to as a “coward”) numerous times in the book.

Other women characters who stood out in the book included a PhD student, an American convert who helps Alif unravel that the copy of the Alf Yeom is indeed very old; and a wise jinn who “trades in information” and helps Alif learn more about the book and navigate the land of the Unseen. These two women’s scholarly assistance helps Alif considerably in the story.

These three women serve as important guides and companions throughout Alif’s journey and hopefully will serve as independent, intelligent, and human (well, only Dina and the convert) examples of Muslim women for readers. I loved reading about them all and identified with them strongly.

Like The Butterfly Mosque, Wilson’s latest work Alif the Unseen marks yet another incredible, genre-bending contribution to the increasing body of literature written by contemporary Muslim authors. Wilson’s approach—an intriguing jumble of computer hacker life, political stifling of speech in a rumbling state, the unseen world, Islamic spirituality—is exciting and makes for a highly entertaining read, leaving the reader with much more to ponder about spirituality, the nature of power, and what makes for a darn good adventure long afterwards.

Alif the Unseen will be released in July 2012 in the United States. 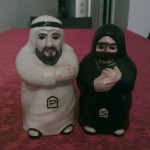 May 30, 2012 “Lost” Girls Are Not Sex Objects – Whatever Their Race
Browse Our Archives
Related posts from Muslimah Media Watch