Change Is Now? No, Not Yet: Manuel Valls as France’s New Interior Minister

I was rather excited about Francois Hollande winning the French elections this month.  I hoped that five years of hateful, fear mongering policy towards Muslims by Sarkozy and his minions would come to an end and that Hollande, for all his supposed blandness, would bring some low-key normalcy to the French presidency.

There was one flaw in my reasoning: Manuel Valls, Hollande’s new Interior Minister.  The Interior Minister in France is a quite important cabinet position, responsible for internal security, law enforcement, identity documents and the like.  But what’s wrong with Mr. Valls personally? Known for being as far to the right as possible, he’s a man after Marine Le Pen’s ideological heart, and his personal battle cry is the sacrosanct laïcité, French secularism. After five years of niqab bans and Muslim scapegoating, Manuel Valls is in the continuity of Sarkozy’s policies, not the disruption Hollande promised.  And I’m not the only one who thinks so.

Two reasons explain why Mr. Valls got such a key post. First is the role of Manuel Valls in Hollande’s successful campaign, and the gratitude-by-way-of-a-ministerial-position that goes along with it.   Secondly, in many ways, Valls is the perfect candidate for a left-wing party in an political climate dictated by the extreme right: he leans so far right, it will be hard for Hollande’s detractors to accuse Valls of being a softie.

I know you’re saying “Nicole, what’s your beef? All politicians are the same and he has done his time.”  My problem is the fact that the word laïcité comes out of his mouth for every other word (he even wrote a book about laïcité a few years back) , and he has no problem using laïcité to go after Muslims.  He talks so much about laïcité that if you google “Manuel Valls” the world comes up in the suggestions.  But strangely, his laïcité puts Muslims in his crosshairs more than any other portion of the population. Here are just a few choice morsels:

While some people have no problem with how the French ruling class interprets laïcité, I personally do not dig apartheid states where Muslim women are second-class citizens unless they de-jab. If, on the other hand, you are waiting for me to tell you exactly why I think these French anti-foulard laws are not ok, may God help you because I can’t; go dig in our archives or do a quick tour on Google to educate yourselves on religious-based discrimination masquerading as secularism. Although when it comes to being secular/anti-Muslim all French politicians are the same, Mr. Valls’ particular interpretation of laïcité is enough to make Claude Guéant (Sarkozy’s Interior Minister) beam with joy and warm fuzzies.   I mean, Muslim women make it so hard on themselves! If you want to wear a headscarf, just stay home, right?

I find his positions both contradictory and strange for a man who is both mayor of a city (Evry) and deputy for a district (Evry-Corbeil) with a reasonably large amount of “Muslims” (no official statistics in France on these things).  What is also strange is that he has been known in the past to support the building of mosques, and for changing the famous 1905 law (the “cornerstone” of French laïcité) so that funding for building mosques could be arranged by local authorities.  But when it comes to how Muslim women dress, no dice.  Some of his detractors pull the “Jewish card” in explaining how his position has gone so firmly to the right in the past few years, as he married a Jewish woman in 2010, and has since declared his eternal allegiance to Israel or some such biznass (which is googleable but I refuse to link to such simplistic discourse). I most definitely do not blame the Jewish card; I think that is a reductive argument and I only mention it because it is a common, unjustified criticism of Valls, especially considering he has done some things for his Muslim constituents (just not the females, and just not in a spirit of total benevolence).

What is justified is that I do believe that had he been this extreme (on security and other matters, not just the Mozrabs) in 2002 he likely would not have been elected and that his continued mandate is due more to voter apathy and “bird in the hand” rather than any support for the more strange of his views.  What I do believe is that Valls, like the Hillary Clintons of this world, is an excellent politician who has a superficial command of certain issues (one critique of his not-so-deep views on security can be found here) and that, depending on which way the wind is blowing, his convictions can change. Right now France blows very far to the right, and his current ideology towards Muslim women places him right in between Brice Hortefeux and Marine le Pen, a perfect place to play “bad cop” for Hollande. Savvy move.

One tiny ray of hope for me is that the new Prime Minister, Jean-Marc Ayrault, has said that if any one of the cabinet ministers loses in the legislative elections, then they lose their post.  Never mind that Valls has had the post for ten years; I can only hope that the good citizens of Evry and Corbeil-Essonnes, including a lot of Muslims, think about what the policies of their deputy could do at a national level. 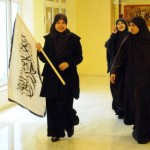 May 21, 2012
In the Name of the Caliphate: What the “Islamic State” Seems to Mean for Muslim Women
Next Post

May 23, 2012 Life in a Women's Shelter in Palestine: Q & A with Samar Hazboun
Browse Our Archives
Related posts from Muslimah Media Watch