Palestine’s religious authorities have announced reforms of divorce laws, which would make it easier for women to end the marriage.

A court in the Maldives has sentenced a 16-year-old girl with 100 lashes and eight months house arrest, which will take effect once she turns 18 (?), for having sex with a 29-year-old male. His sentence is 10 years prison.

An Egyptian hijab-wearing woman has been barred entrance to a private beach in Egypt, because of her “modest” swimsuit and head scarf.

In the Afghan province of Ghor, women behind the wheel are still an oddity, but despite the fact that not all are supportive of female drivers, more and more women are obtaining driver’s licenses.

A growing number of (female) Muslim students from abroad are enrolling in American Catholic colleges.

The use of cheap Chinese-made synthetic hijabs and the humid summer weather has caused a rise in skin irritations among hijab-wearing women in Tajikistan.

Four Malaysian transgender women have started a court case to challenge the Islamic law that forbids them dressing and behaving like women.

Chief Minister Oommen Chandy of the Indian state of Kerala has informed the state legislature that since 2006 over 2500 women have converted to Islam in the state, and that he did not find any evidence of forced conversions, or “love jihad”.

In two Iraqi cities, Islamic clerics have mobilized security guards as a “fashion police” to make sure that (predominantly female) Iraqi youngsters adhere to a more “conservative” dress code, especially in areas that are deemed to be sacred.

The BBC reports that sexual harassment in Egypt is “epidemic”.

September 4th was World Hijab Day, and thousands of women in Pakistan answered the call of Jamaat e Islami and rallied for the proper observance of the hijab.

Indonesia is organizing the first World Muslimah Beauty pageant. Not only has the winner to be hijab-wearing, they are have to be proficient in Quran reciting too, in addition to many other accomplishments. The icing on the cake is definitely the team of honorary judges: 1,000 orphans, some of whom will be put in the care of the participants to test their “nurturing abilities.” It airs only in Indonesia though… Such a pity.

Haifaa al Mansour is the first director to ever shoot a film in Saudi Arabia. The film Wadjda was shown last week at the Venice Film Festival.

Next week are the presidential elections in Somalia. In an open letter Zainab M. Hassan calls on all future female parliamentarians to demonstrate collective leadership in their choice who should lead the country.

According to a Dutch institute, there are hundreds of women living in forced isolation in the city of Amsterdam alone. Most women are from strict Muslim or Christian backgrounds.

Chinese authorities have confined Uyghur widow and mother of a missing son Patigul Ghulam to her home to avoid her seeking international attention for her son’s case during an international expo in her hometown of Urumqi.

The traditional practice of feeding a newborn water that has been used to rinse a tablet with verses of the Quran in the African country of Guinea, and other beliefs and traditions, often interfere with the mother breastfeeding her infant. While the mother might want to solely breastfeed her child, it is often under the pressure of her family that the child will get fed other foods and liquids.

Transgendered people in Pakistan have won the battle for a third gender option on ID cards, and, despite discrimination, their status in Pakistan is slowly rising.

The ban on female newsreaders wearing the headscarf has been lifted in Egypt, and last weekend was the first time that the news was presented by a woman in hijab.

Al Jazeera reports on the rise of domestic violence in the West Bank, and profiles the story of a survivor, Raneem, who is currently rebuilding her life in a shelter, after a long history of abuse.

September 6, 2012
More about Sexual Harassment in Egypt
Next Post 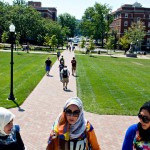 September 11, 2012 Muslims at Catholic Colleges: Aliens From Outer Space Are Thriving on Earth
Browse Our Archives
get the latest from
Muslim
Sign up for our newsletter
POPULAR AT PATHEOS Muslim
1