Nathan Lean’s book The Islamophobia Industry: How the Right Manufactures Fear of Muslims is a look at the pernicious ways in which anti-Muslim sentiment is fostered, both in the US and to a smaller extent in Europe.

Although MMW is primarily focused on Muslim women in the media and their issues, I chose to review this book anyway because it lends context to the issues that affect us. In recent months, I have been told that Islamophobia doesn’t exist (and is just a fabrication of the victim mentality Muslims have fed the liberal media) that “a Muslim woman told me not wearing a veil is ok so the veil isn’t ok” (when the truth is much more nuanced than that) and that teh Islamz is inherently responsible for domestic violence by definition (because only Muslim men hit women, of course). I also think that Muslim women are on the front lines when it comes to bearing the brunt of Islamophobia (headscarf wars, anyone), and in that this book, while not looking at women per se, sets the stage for the issues that affect us. In this vein, if I could critique what is otherwise an excellent book, it would have been nice to see women’s issues treated in a more balanced way, given women are affected by Islamophobia in lopsided ways (see: France’s niqab ban).

Much like the work of John Esposito and Edward Said back in the day, in a sea of the Bernard Lewises and Thomas Friedmans of this world, Nathan Lean’s book is a welcome addition to Muslim cultural criticism when the only stuff getting airtime these days seems to be the recent Pamela Gellar New York subway ads.  Lean takes us through the history of fear in America, drawing parallels among the anti-Catholicism of the 19th and early 20th centuries, the Red Scare of the mid-20th century, and the discourse surrounding Muslims today. As he mentions in the introduction, it is a propos that parts of the evangelical Christian community root their faith narratives precisely in a “religious showdown” with Muslims.

The Islamophobia Industry reads well as a continuum, but it is also an easy read chapter by chapter – I could see how either the entire book or parts of it could be assigned in a classroom context. As a tech blogger based in Europe, the two highlights of Lean’s book for me were Chapter 2 (“A Web of Deception: Fomenting Hate Online”), covering the role of the internet in creating hate; and Chapter 7 (“Across the Pond: The Deadly Effects of Hate in Europe”) which provided an accurate analysis of the situation “over here.”  In Chapter 2, I couldn’t help but chuckle when Pamela Geller’s name showed up on only the second line and set the stage for a takedown on Atlas Shrugs and Jihad Watch (I don’t hyperlink and send traffic  to bigotry, sorry). This chapter also provides an extremely detailed analysis of the Park 51 shenanigans. I enjoyed Chapter 7 because one of my ongoing complaints about America-based activists is that some people, while well-intentioned, fail to realize that Islamophobia isn’t the same game “over here,” something that Lean catches onto right away in the way he writes the chapter. This chapter starts out with a play-by-play of Anders Breivik’s acts of violence (and some ironic giggle-worthy quotes about how his gushed over Robert Spencer). Lean goes over some of the context in France, Belgium and Switzerland, and notes that the extreme right, where necessary, is “creating fears about Islam and Muslims rather than exploiting existing ones,” as shown by campaigns by people like Geert Wilders, or the anti-Minaret vote in Switzerland.

I found this book, just as when I read Edward Said’s Covering Islam years ago, to be a disturbing yet eye-opening read, timely in a U.S. election season, where people in non-negligible minorities still persist in thinking President Obama is a Muslim, which is somehow supposed to be a bad an evil thing.  I cannot overstate the role this book has in providing media context. It is helpful to understand (yes, some people don’t get it) that “media” like Fox News and Atlas Shrugged are part of the problem – spewing hate rather than simply expressing innocent points of view. So if you think Islamophobia does not exist and this is all just some part of a victim discourse and if Islam went away no one would have any more problems, The Islamophobia Industry will be an uncomfortable read for you.  As John Esposito mentions in the foreword, Islamophobia isn’t just a Muslim problem; it affects everyone and we all – governments, community leaders, media – have a role in not drinking the Kool Aid.

This book was provided to Muslimah Media Watch by the publisher. There was no expectation of a positive review or even a post. The book is available from the publisher, as well as at Amazon.

October 23, 2012
Looking “Pretty”: Muslim Women and the World of Cosmetics
Next Post 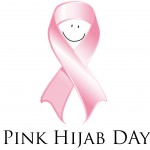 October 25, 2012 The Pink Hijab Day Blues
Browse Our Archives
get the latest from
Muslim
Sign up for our newsletter
POPULAR AT PATHEOS Muslim
1