Jellyfish Fantasies: The Creature with the Black Niqab Fetish

Like a horrific scene from a 1960s monster movie: unbeknownst to scientists on a fossil-hunting expedition along the mist-shrouded Arabian Gulf, a prehistoric creature of gargantuan proportions slowly emerges from the water to the piercing screams of… oh no, wait. It’s not the Creature from the Black Lagoon, or even the Loch Ness monster — it’s just a woman in niqab taking a dip off the cost of Dubai for a staged photoshoot.

“An Emerging Mystery” is the creation of Sebastian Farmborough, a budding photographer who spends his time learning new languages, traveling the Middle East and apparently sexualizing Muslim women when he’s not working on his photography skills. While this is a lovely photo, I can’t get past the photographer’s motivation for creating the piece, which he’s outlined clearly for the Express Tribune (with emphasis added):

“The image is based on one of my very first experiences in Saudi Arabia. With the naked beaches of Barcelona a not too distant memory, I headed down to the Arabian Gulf for a dip. There, I became mystified by something black and obscure out at sea. It looked like a huge jellyfish. Then, as it approached closer, I realised that it was in fact a woman.”

Well, I’m certainly glad he figured that one out before she stung him with her venomous tentacles, forcing him to run around the beach begging Saudis to pee on him.

Watching a woman swim fully covered was such an “intense experience” for Farmborough that he just had to “capture it” for himself. Now, I can understand that after the naked beaches of Barcelona, Saudi Arabia might be a little overwhelming, especially if you’re only evaluating women on the basis of their nakedness or lack thereof — but it’s a special gem that goes the extra step to sexualize a cultural and religious context experienced in one Muslim country, use it to represent all Muslim women, and call it art.

Realizing that taking pictures of women on the beach in Saudi Arabia could get him arrested, it took Farmborough over a year to gather his equipment and find a willing model with “beautiful eyes” and who was “open-minded enough to actually be a part of this photograph.” Eventually he was able to fulfill his vision in Dubai.

According to the artist this photograph is “extremely symbolic of Muslim women’s increasing prominence in the world, despite a continued mystery that surrounds their veil” — and is a part of his valiant effort to counteract negative portrayals of the niqab, saying that “[it] in no way hinders their progression or their amazing personalities.” While that’s true, nothing says progression and amazing personality more than sexy bedroom eyes shining through a veil.

You know, I probably wouldn’t have such a problem with this photograph if the motivations behind it weren’t so terribly sexist and misguided, and if the piece wasn’t framed as something truly evocative and, ugh, liberating. Especially when it’s literally the same old Arab/Muslim stereotype of the exotic, veiled beauty. Only this time instead of belly dancing or being oppressed, she’s a contestant in a strangely suggestive wet-burqa contest. Unfortunately, I have no doubt this image will join the hundreds already used by media to unimaginatively represent Muslim women going about their daily lives.

Thankfully there are many real examples of niqab-as-art being used provocatively — in edgy, original and critical ways — by artists who are actually working toward dispelling myths and stereotypes by highlighting the fact Muslim women are not a monolith to be essentialized.

In the end, there’s really no mystery to Farmborough’s work. It’s simply the sexist, Orientalist, jellyfish fantasies of a privileged, cultural opportunist.

A shorter version of this article was first posted as part of wood turtle’s Muslim roundup on September 14.

October 8, 2012
The Pakistani Women You Have Probably Heard About
Next Post 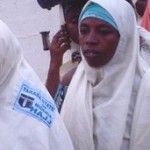