Malala Yousufzai: A Story of Education, Drones, and Foreign Policy

On a recent grocery store run, my father and I overheard an interesting exchange between two male store attendants about Malala Yousufzai, the 14-year-old activist from Pakistan’s northern Swat region who was targeted recently for her outspoken views on education.  While one of the attendants bemoaned her fate, his friend, a young Pathan, speaking with the tell-tale lyricism of Urdu in a Pashto accent, proceeded to comment on how many girls like Malala are being killed by drone attacks in South Waziristan.  My father, generally not one to intrude, gently chastised the younger man, informing him that Malala was attacked by the Taliban and not targeted in a drone attack.  The man stared at my father for a beat, shrugged and simply walked away.  I wasn’t entirely surprised by his reaction.  This incident, however, does serve to demonstrate (to some extent) how the narrative of Malala’s attack is taking shape in the minds of some members of the Pakistani public.

On October 14, a live TV event was held where students from several age groups and schools, in addition to various members of civil society organisations, held a candle light vigil for Malala in front of the hospital where the young girl was initially operated on.  The event was hosted by controversial televanglist, Dr. Amir Liaquat, and I watched as he concluded with a prayer and interacted with audience members on the need to “raise our voices” against the attack on Malala, the drone strikes, and the victims of the Lal Masjid (Red Mosque) military operation that took place in Islamabad in 2007.  By comparing Malala’s activism with the victims of drone strikes and Lal Masjid, suddenly Malala no longer appears to stand solely for female education rights but for every girl/victim who has in some way been indirectly affected by US foreign policy, in particular to America’s “war on terror” in which the Pakistani military also plays a complicit role.

Overall, support in Pakistan for the injured winner of the National Youth Peace Prize has been vociferous; from candle light vigils across the country to protests against extremist factions, Pakistanis are rallying, calling this a war between the light of education and darkness.  Key government officials have also contributed to the Malala-get well rhetoric whilst the army has vowed to continue its fight against extremist factions.

Global media, too, is rightfully enthralled by this young woman whose courageous stance has provided a timely impetus for change.  In addition to the advocacy surrounding “International Day of the Girl Child” (which closely coincided with Malala’s attack), former British PM Gordon Brown, now a UN Special Envoy for Global Education, is spurring thousands of supporters into signing the new “I am Malala” petition.  The petition will be presented to the Pakistani President and the UN Secretary-General (in upcoming visits, respectively), demanding that Malala and every girl, be granted their right to education.  Additionally, a host of influential personalities have voiced their support for Malala including US Secretary of State, Hillary Clinton; Madonna dedicated a strip tease and a fake(?) tattoo to Malala; Angelina Jolie’s charity donated  money to support education initiatives across Pakistan and Afghanistan.

Besides the misogyny-addled justifications proposed by the Taliban, there are still others who choose to interpret the attack through their own ideological lenses.  Some (both in Pakistan and abroad) have used her attack to justify the use of drones, emphatically suggesting Pakistan’s need to embrace the strategic advantages of drone strikes to curb terrorism.  A recent study however, attempts to demonstrate how “targeted” drone killings in South Waziristan are politically counterproductive, kill large numbers of civilians and undermine respect for international law.  Based on interviews with victims, witnesses and experts, the report indicates how living under the threat of an attack terrorizes men, women, and children, giving rise to anxiety and psychological trauma.  Conversely, a recent Dawn news report actually calls into question the quality of information collected in the aforementioned report and even suggests that the number of civilian “casualties” have actually “declined” over the last three years. Unfortunately, for every supposedly “legit” target, there are far too many “casualties” to justify the continued use of drone strikes to eliminate terrorist threats within Pakistan and abroad.

Although Pakistani religious leaders have joined the chorus of condemnation against Malala’s attackers, the chief of a leading right wing political party (Maulana Fazlur Rehman) lamented that while the attack on Malala Yousufzai should be condemned, nobody was protesting the deaths caused by the drone attacks.  Rehman has since also compared Malala to Aafia Siddiqui, inquiring why the media, security establishment and international community remained silent when an American soldier shot Pakistani scientist Aafia Siddiqui.  Siddiqui is a Pakistani-born, American-educated, former neuroscientist with ties to Al Qaeda, who is presently serving a jail term for allegedly trying to murder her U.S. interrogators in Afghanistan.

Compounding the drone strikes and the varying interpretations of Malala’s attack is the actual, dismal educational attainment levels in Pakistan.  With approximately 180 million people, of which less than 2 million are registered tax payers (2009), it is not surprising that the actual GDP allocation for education hovers at 2 percent.  It also turns out that the US sends more in terms of security aid instead of aid for education to Pakistan. This is all in addition to the myriad of governance issues plaguing state bureaucracies and the unruly game of brinksmanship being played by intelligence agencies in South Waziristan and Balochistan – all to the detriment of a developing country and its uneducated populace.

Why are we surprised that the photogenic image (and story) of a young, Muslim victim of terrorism is being exploited by media outlets everywhere?  In addition to news stories that, more often than not, portray Pakistani women and girls as victims, it is not impossible to suggest that highlighting the Malala incident was, in part, important in view of the previous media scrutiny resulting from a damning report by the Bureau of Investigative Journalism which underscored how very “un-surgical” drone strikes actually were.  The attack on Malala thereby providing the requisite justification for its usage.  In the same vein, the media blitz surrounding Malala at home (it has since waned) may be construed by some as a move to improve Pakistan’s soft image abroad – as if to suggest “hey, we apologize for our overzealous response to the irresponsible use of the Prophet’s image, and guess what, we can rally behind a young woman.”

As a Pakistani, I’m not sure if our “Malala moment” is over yet, but perhaps we as a nation may require several “Malala moments” before its impact drives the message home: education is everything.  And not just a feeble 10 percent rise in literacy rates over several years but a fully educated and empowered populace, where men and women are able to contribute to nation building, side by side and where due process is guaranteed.  But first, let’s give Malala her due.  For once she is everyone’s hero, her bravery transcending both geography and religion.  Why mar her achievements with comparisons that undermine her effort as a self-possesed and empowered individual (in her own right)?  There is no doubt Malala’s bravery and determination is (and will continue to be) a source of inspiration for girls and women the world over, and this doesn’t have to take away from the number of other issues that also deserve attention. 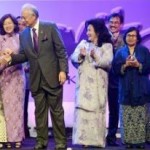 October 29, 2012
Reinforcing the Second Shift: Malaysian Women as Workers and Mothers
Next Post

October 31, 2012 MMW Eid Roundtable: Part 1
Browse Our Archives
get the latest from
Muslim
Sign up for our newsletter
POPULAR AT PATHEOS Muslim
1