Oh Canada… Not So True or Free

Her eyes met mine sporadically while we stood in the packed subway train in Toronto. It was the month of Ramadan, the month that encourages Muslims to put forth that much more effort – to show sisterhood and warmth to those that we don’t know. There was something about her that made me want to start a conversation. There was an air of unease to her, of feeling out of place, while trying to put the pieces together. I had made the decision that, if Allah willed, this sister and I would be allowed to connect.

The moment came; two seats freed. She sat first, and then I followed. I said, “As-salaamu alaikum and Ramadan Mubarak.” Her eyes glistened, and smiled as she responded with greetings that were full of acknowledgement and sincerity. “You speak Arabiyya?” she asked, with a hint of hope. “No, I don’t. I would like to learn though,” I had replied, wishing that I could have said yes. Despite our inabilities to speak in each other’s languages well, the sister shared with me her story of coming to Canada from Libya. She, along with her husband and children, had arrived in Canada six months after the intra-state violence in the North African country began. She was woman in her early 20’s, marked an outcast in “Canadian” society, because of her language, her nationality, and her form of niqabi dress.

Over the past few months, doctors and citizens in Canada have actively responded in opposition to the Conservative Government’s cuts refugee and refugee claimant’s health care. Much like other countries in North America and Europe, Canada is experiencing a new tide of anti-immigration sentiment. Recently, the Canadian government has been making revisions to immigration policies, creating “safe lists” of countries that are deemed to be democratic, or in a stable condition, basically creating a system where refugee claims by individuals and families can be refused, because their country is deemed “safe.” The effort and campaign to buff up the prison/carceral system to reflect the failed approaches implemented in California, Texas and France are being incorporated into an already unjust justice system. Yet where do Muslim women fit in all of this?

Media coverage of the recent changes to the abovementioned policies has rarely discussed the inherent racist and sexist layers of governmental refugee and immigration policy—a reflection of mainstream media’s own compartmentalization of what happens in the country, which reproduces images through “Otherizing” people who don’t fit the assumed default white-Canadian citizen mold. The failure to connect the dots between immigration policy and the layered experience of racialized women is an affront to the recognition in feminist and women’s rights movements that factors such as age, disability, socio-economic position, or membership in a particular ethnic or racial group, could compound discrimination on the basis of sex and thus create multiple barriers for women’s empowerment and advancement.

So let’s go there. Because all of the changes that are being made in terms of immigration, health care and the prison system are going to have profound effects on many racialized communities, including racialized Muslim women.

The Canadian government prides itself on its militaristic interventions in the Middle East. Proud of the troops positioned in Afghanistan, the Canadian government was also very fond of the intervention of Libya in 2011. However, through increased funding of the military and budget cuts to social services, it is clear that the leaders of the country are fixated on increasing their military prowess and influence in the global political stage, yet unwilling to care for the influxes of refugees that are produced in the process.

Media coverage of budgetary spending and changes to Immigration laws, such as an explanation of the detrimental effects of the Faster Removal of Foreign Criminals Act, Bill C-43, fails to take it a step further to understand the links between the people who are coming into the borders of the Canadian state and the effects of Canadian corporate or military intervention.  Many of the world’s refugees are women, oftentimes torn from their husbands and/or fathers due to violence.

The violence (physical and systemic) doesn’t end once they reach Canada.  According to the Canadian Research Institute for the Advancement of Women, since the events of September 11, 2001 the heightened emphasis on security and racist assumptions about certain communities has had an impact on racialized communities. Women with Muslim- or Arab-sounding names are at a particular risk of being targets.

The Canadian Broadcast Corporation (CBC) has developed an interactive story that had pictures of doctors and patients telling their stories about the changes made to the Interim Refugee Health Program that had provided basic health care for up to 128,000 refugees and refugee claimants. The piece does a wonderful job at placing a human face on the issue, an issue that may not be understood by the average Canadian who is told by the Minister of Immigration that “bogus refugees” are in our midst. However, an analysis of racism, Islamophobia and sexism isn’t explicitly incorporated. Although doctors whom CBC reporters have interviewed referenced terms like “class of refugee status” or “designated countries of origin” while explaining the differential treatment of refugee claimants by the Interim Refugee Health Program, direct connections to race and the culture of Islamophobia and other forms of discrimination were not mentioned.

But is the mainstream media the only one to blame for not discussing how such changes will directly impact racialized and Muslim women? Organizations whose mandate is centered on providing advocacy for the Muslim community have also failed to address the inherent racist, sexist and Islamophobic sentiment in governmental policies and media coverage. For example, the Canadian Council for Muslim Women has produced a plethora of press releases and reports on the politics around the niqab, polygamy and honour killings—essentially issues that are seen to only be unique to Muslim communities—yet there is no mention of the recent political attacks on refugee and migrant communities. Or what about the Council on American-Islamic Relations Canada (CAIR-CAN) where, after you search the terms “refugee” “health care,” results are either dated or provide unrelated information? It could be a product of who funds certain organizations; for example, Citizenship and Immigration Canada funds groups like the CCMW, thus potentially stifling critique and opposition. What we are witnessing is a neutralization of Muslim advocacy groups who are taking apolitical stances in order to be perceived non-threatening by the Canadian government in a climate of anti-Muslim sentiment. The Muslim community must be wary of becoming static and succumbing to being told what issues they should or shouldn’t have a say in.  It also needs to expand the range of topics seen as relevant to Muslim communities.

But is it really?

The sister I met on the subway that day, two years ago, has had to undergo the changes in culture, food, and environment, like so many others.  She and I parted ways, potentially never to meet again, but we as a Muslim community, who have either immigrated here to Canada or know of others who have, must stand and be firm in our rights and the rights of others on a basic human level.

This sister will be confronted with racist comments and silent gestures. She may not have access to resources and health care; she may be forced to operate under a new oppression of institutional racism within a society that is hell-bent on saving the Muslim women from her “barbaric Muslim husband.” The media must begin to tell the stories of refugees that unmask the political correctness that covers the intentions to keep out those deemed unworthy of true protection and safety. I urge Muslim women who are writers, artists, mothers, lawyers, avid readers, whoever, to tell their stories and to stand in solidarity with those who are socially marginalized because of their citizenship status. 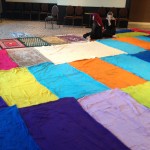 November 2, 2012 Friday Links | November 2, 2012
Browse Our Archives
get the latest from
Muslim
Sign up for our newsletter
POPULAR AT PATHEOS Muslim
1