Oops, Your Jahiliyya Is Showing: Exposing the Convert Party Girl

Last month Amy Sall and Heather Matthews told their conversion stories to the tabloid press. And instead of using the stories to dispel myths about Muslims, educate the public about Islam, or even come up with something remotely newsworthy, both news sources emphasized their incredible transformation from “former party girls” to, well … plain old Muslim.

But with fabulously shocking headlines!

The Sun‘s “I’m a blue-eyed, blonde Brit but when I wear hijab in the street I get spat at and abused: Meet the party girl who became a Muslim convert,” focuses on the verbal abuse Amy Sall experiences whenever she wears hijab in public, and the cultural clash she feels exists between the more conservative members of her community and her practice of Islam:

“After all, I’m blonde, blue-eyed, love a drink and have tattoos — hardly your average Muslim woman… I’m still trying to understand the role of women in Muslim society, and I don’t know if I will ever properly fit in. It is like living between two worlds.”

Amy’s conversion story of meeting her current husband while dancing at a nightclub, as well as her new and sincere dedication to practicing Islam, is overwhelmingly overshadowed with anecdotes of her struggles with hijab and drinking alcohol. The article is paired up paired with images of Amy with and without hijab — and drunk, in a pre-Islam night out with her girlfriends.

Despite the fact that she fully admits to not being the best Muslim she could be, she does respect the religion, admires her husband’s piety and plans on raising their three children as Muslim. But the message readers are left with is that she just needs the occasional drink night out, to “reassure myself I am still me.”

Because, you know, this article isn’t really about her conversion, highlighting convert family struggles or celebrating a love story — but about emphasizing that scary, foreign Muslim men are converting white women to a religion that erases their sense of self.

The Daily Mail‘s “Islam is about real love, not just lust: The party girl who’s embraced a new life as a Muslim convert” is more positive towards Heather Matthews’ life-changing conversion — but frames her story with a deliberate “slut shaming” of Western culture.

After researching Islam to convince her now ex-husband (also a Muslim convert) that religion was wrong — she eventually agreed with what she was studying and decided to take the shahadah. Today she reflects upon her pre-Islamic life by saying her previous party days were filled with mistakes and that sexy pictures of her on a recent trip to a Mediterranean party island illustrates “everything that’s wrong with Western beauty.”

“I thought I needed to act and dress in a certain way to feel good about myself… It is about self-respect. If you dress and act in a certain way, rightly or wrongly, you’ll be treated in a certain way… When I’m wearing the headscarf I can smile at people without them thinking it is a sexual advance.”

The article shows a recent image of Heather in hijab and one four weeks prior on vacation wearing a revealing tank top. Twice it’s mentioned that her sudden conversion and adoption of hijab is seen by her friends as being “another one of her fads” — but her dedication to praying, fasting, reading Qur’an, learning Arabic and keeping halal is mentioned only in passing at the end. It seems more important to emphasize that she’s rejected her previous “shallow” and immodest lifestyle for one that supports “arranged marriages” (gasp!).

Both articles also mention a report by Faith Matters which found that the number of Muslim converts in Britain has passed 100,000 and estimates that nearly two-thirds of these converts are women. Lara wrote about the Independent’s framing of this report for MMW last year — which makes me think the tabloids had a slow news day and just looked at the calendar to see what they could rehash.

I know these types of articles are supposed to be sensational, but they really only end up smearing the women’s stories and creating a bifurcation between Muslims and so-called Western society. This “living between two worlds” mentioned by Amy is precisely the dichotomy theses articles emphasize, namely that there are only two types of Muslim women: the anti-Western, foreign conservative, or the white party girl convert who has to give up her culture for an oppressive religion.

Western civilization, defined only in terms of nightclubs, alcohol and bare midriffs is juxtaposed with Muslim culture, which is defined only in terms of hijab, prayer and abstinence. Dour Muslim women never have any fun (while Muslim men troll dance clubs looking for white women to convert). It’s unrealistic, silences the experiences of converts from other ethnicities, and denies the existence of a “Western” Islam — all with an undertone of mockery that the convert experience is just a charade.

This is especially exemplified in the comments sections, which are particularly unforgiving toward the two women. The most popular comments make fun of the women’s motivation for converting, accuse them of having low self esteem or incorrect understanding of modesty (pre and post conversion), and say that there was no need for them to convert at all. The least popular comments all seem to be from Muslims congratulating the women on finding new purpose in life, and wishing them well on their religious path.

These women might very well embrace the former-party-girl-turned-pious as a valid part of their identity and exciting journey to Islam. But the deliberate framing and negative reception to their stories universally deride Muslims at the expense of valid convert experiences. 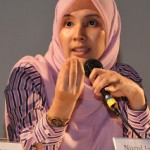 November 26, 2012
Just a “Liberal” “Girl”?: The Framing of Nurul Izzah Anwar over “Freedom of Religion” Remarks
Next Post