As 2012 draws to a close, we’ll be posting some highlights from this year’s posts.  We published way too much to be able to go back through all of it in detail (that’s what the archives are for!), but the next few posts will include some posts that stood out from each of our writers over the past year.

“Hey Girl, You Got It Covered” by Nicole

“So “You Got it Covered” is playing it wrong because very little anyone can say at this point will mean anything to anyone about the merits (or lack thereof) of wearing hijab. It is funny, because many of the platitudes spouted about wearing the veil is how it is all about how we are judged for our minds and not our appearances.  In other words, the BS we get fed is that hijab is supposed to take us out of the Hollywood culture. I’m not so sure; I think girls in hijab get judged double and triple for their appearances.  In fact, our entire worth as members of the ummah is sometimes tied up in our scarves.  Let’s ask our musical friend again, who reminds us that we are “more than just beauty on the outside” but at the same time, he wants us to know that “it’s even more beautiful/When you’re covered/In your colors.” So is it or is it not about what we’re wearing? Because for me, while being an ode to the Covered Muslimah, “You’ve Got it Covered” is still all about our clothes.”

“Stop Using Us: Women’s Voices in the Egyptian Presidential Elections” by Eman

“Even now, while we are waiting for stage two of the elections to start, women again are being used as a tool. Right now we are either to choose a religious fascist state with the Muslim Brotherhood candidate, or a military oppressive state with the former regime candidate, and all that social media seems to care about is not to vote for the MB candidate or else women will suffer like they did in Iran, Gaza and Sudan!

So women were not suffering during Mubarak regime when human trafficking was all over the country and 14-year-old girls were forced to marry old Gulf men for money? Do you know that the Egyptian law stating the maximum difference of age between a married couple was adapted to Mubarak’s son who was 21 years older than his wife?  Were women not suffering when Mubarak’s  police used to arrest and torture women who were members of the opposition parties and torture them?

I am not in any way defending the religious state over the military one. I just refuse to be fooled into thinking that only religion is what could be used against me. Patriarchy has no religion, and no political affiliation when it comes to women.  Either way, its effects are the same.”

“Half the Sky Documentary Reviewed” by Azra

“It’s still unclear to me what viewers and readers are meant to take away from the film and book.    Despite the criticism outlined above, the stories were informative and heartening to see, especially when grassroots approaches by local women were portrayed (and when the actresses and Kristof are absent from the scene). It would have been heartening to include examples of women’s oppression from the Global North as well—this might have helped to dissipate the dichotomy of the Western Savior and Worldwide Oppressed. As DasGupta eloquently states, the film, as is, “undermines global sisterhood rather than strengthening it.”

Perhaps most damning, though, in the film is the overt celebrification of journalistic narratives and the elevation of the journalist’s role to one of a celebrity-activist. Women from around the world deserve to have their stories told in a way that elevates their challenges and overcomings, fears and hopes, in the messy, beautiful, and complicated way things usually take place—with no celebrities in sight.”

“Responsibility as Representatives: A Need for Honest Reflection” by Sharrae

“There are circumstances that have allowed some voices and perspectives to be heard over others.  What responsibility do we have as Muslim women to use various platforms to discuss these issues?  What responsibility do we have to we have to the women who are usually are either at the forefront of activist movements (Eltahawy points to Salwa el-Hussein, Samira Ibrahim, and Rasha Abdel Rahman) or those who often undergo the most traumatic cases of sexual and physical violence but don’t always have access to international media or blogs? Generally, some writers tend to talk about Muslim women living in the Middle East as if they are in a deep slumber, waiting to be awoken. But although another article within the same FP issue opens with a statement from an Afghan woman who says, “Please don’t see us as victims, but look at us as the leaders we are,” all of the writers fail to bring sufficient attention to the historical resistance of women in the region. Instead of providing a space for women who are at the front lines to tell their own stories, Foreign Policy’s sex issue, and in many ways, myself in writing this article, is engaging in dialogue over issues without the most important voices, those who experience first-hand oppression.

How can we open space for women in the Arab and broader Muslim world to tell their own stories? How can we begin to stop the war waged against the bodies of Muslim and brown women without reproducing such practices? How can we respect a woman’s choice, experience and beliefs, without speaking about her as if she doesn’t know any better?”

“Are we as Muslims just busy overburdening ourselves by putting way too many restrictions on everyone around us? If the worry is about protecting women who are “pearls”, more importance should be given to how men treat the women in their very own homes. And to how we raise our sons to respect all women, be it hijabi, dijabi, non-Muslims, and the ones with or without a Facebook profile.”

“In the Name of Honour: The Free Aafia Siddiqui Campaign in South Africa” by Safiyyah

“So why the duplicity? This brings me to the crux of the issue – the use of Aafia Siddiqui as a poster woman. As a Muslim woman incarcerated by the “West,” she falls into a larger pattern of anti-Western sentiment, the perceived (and certainly in many cases actual) dishonouring of the Islamic sacred (where women and their “honour” are central). Stories about “sister” Aafia are replete with descriptions of how her honour has been compromised (apparently, there is nothing worse than a Muslim women being controlled by non-Muslims), and that Muslim men should assume their rightful positions as leaders, to save her from this disgrace. She is also referred to as an “imprisoned rose”. That she is a victim of abuse, not by her family or religion, but at the hands of Americans, generates sympathy amongst listeners and, of course, ups ratings. Her persona is painted in an overtly religious way, from her Islamic studies training and memorization of the Quran to involvement in religious affairs like the MSA. The impression given is that Siddiqui’s case represents an assault on Islam as a whole – a common motif when it comes to the treatment of Muslim women. “ 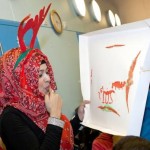