Little Hijabis: To Wear or Not to Wear?

Little Hijabis: To Wear or Not to Wear? October 7, 2013 syahirah

Recently, a series of online shopping sites were brought to my attention: at first glance, they seemed to be the garden-variety online hijab shops. Some even had blanked-out faces – again, nothing that I hadn’t seen before. However upon a closer inspection, I noticed that the hijabi models on the website were smaller than usual – they were little girls.

My immediate reaction was that of uneasiness. Even though in Singapore where I grew up, it is common for parents to dress their pre-pubescent daughters in hijab (as young as just one year old), I only recently found out that it’s not the norm in other countries with Muslim communities. I myself wore it to kindergarten at the age of five, and I remember wearing it during Eid at the age of seven onwards. My mother thought it was harmless and she never forced it on me because she thought it would be better for me to get used to it in the most pleasant way possible.

It was only when I travelled to Morocco about five years ago, where I met young girls who were allowed to wear anything they wanted, and it was only after reaching puberty that they would usually wear a hijab when leaving the house. This made sense to me, because even the most oft-cited hadith that provides the guidelines for hijab mentions menstruation, or puberty, as the starting point.

However, I could also understand why parents would want their young daughters to start wearing hijab or cover up at an early age, even though this was not a religious requirement. The reason usually given is that it is easier to make them get used to wearing it. I even heard one of my aunts suggest that parents should dress their girl infants with headbands so that they would get used to having something on their head, which would make wearing hijab easier later on.

This forced socialization has its drawbacks, for example, when girls are old enough to question why they have to wear the hijab. In fact, this was exactly the question posed to me by a nine-year-old girl, who had come to the mosque where I volunteered by giving tours, as part of her weekend religious class activities.

Because women (she was not a woman) have to cover up their beauty ( ‘beauty’ as a euphemism for sexual appeal) in the presence of men they are not related to (is mahram relevant for a child?) and can only show it to men she is related to, like her husband (she was decades away from having one): all my stock answers simply fell short of satisfying her innocent curiosity.

This little girl’s question eventually led me to a long journey of researching about hijab, especially for myself.

Another concern I have with making little girls wear hijab is that it is prematurely socializing them into worrying about their looks, especially in the context of the male gaze. Take a look at the models on some of these online shops:

Some of these outfits are too complicated (not to mention impractical in hot weather) for these girls to be doing everything they would want to go, like playing freely outside.

Another common reason given for dressing little girls modestly is that it counters the sexualized girl outfits that come from “the West”. I agree that these shops provide some very lovely and simple alternatives, with no glittery slogans like “Cutie Pie” emblazoned across the chest.

But hijab sexualizes its wearer in its own way, because in a social setting it indicates that the wearer has the ability to give off sexual appeal in the first place. (Sometimes at a glance, it can even make the wearer look older than they really are.) One of the shops even showcases a fashion runway of young girls in various styles of hijab and clothes that cover all their limbs – what’s the difference, exactly?

I truly believe in wearing the hijab for spiritual reasons. I also acknowledge that hijab has social reasons, for which some women wear it as well. The bottom line is, the informed decisions that grown women make, with their own research and knowledge, is something to laud. But let’s allow our children to choose for themselves when they are old enough. 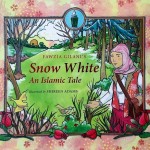 October 8, 2013 "Snow White: An Islamic Tale" Reviewed
Recent Comments
4 Comments | Leave a Comment
Browse Our Archives
get the latest from
Muslim
Sign up for our newsletter
POPULAR AT PATHEOS Muslim
1

4 responses to “Little Hijabis: To Wear or Not to Wear?”