In a previous post, I talked a little about the 99 Hijab Stories book and why the idea of the book made me squirm.

I don’t know how succesful the book has been, but it certainly has generated enough hype that a few months later an Indonesian TV channel announced that it would air (*drumroll*) a TV show “inspired by the book”.

The basic idea of the show is pretty much similar to the book: hijab-wearing public figures will be invited to the talk show to talk about why they wear the hijab, their hijab journeys and so on.

But I bet there is one famous woman the show will never invite, even though the story of this woman was included in the book and her face appears on its cover.

In December, Ratu Atut Chosiyah, the governor of the Banten province, was arrested in one of the most-publicised graft cases in Indonesia. Tabloids were soon filled of stories of her Louis Vuitton headscarf, shopping trips to Europe and her opulent lifestyle. Only a couple years ago celebrated as the country’s first female governor, Ratu Atut is now seen as a “disgrace” to her nation.

Which is why I am sure that she will never appear in the TV show. I even wonder if Muhammad Assad, the author of 99 Hijab Stories, is strongly considering to redo his book so that Ratu Atut will no longer appear inside the book or on its cover. Because the hijab stories as written in his book are all about righteous women who don the hijab and live happily ever after. A woman who tripped and made a horrible moral mistake certainly does not fit its storyline.

In other words, I think to be fair, the book’s and the TV show’s title should be changed to “One-Dimensional Hijab Stories”, as these stories hardly capture the life’s realities of hijab-wearing women.

I wear hijab, and I’ve done many things that I’m not proud of – with my hijab on. But I’m not denying them, because my mistakes are a part of who I am, just like my hijab. If I am to define my hijab story, it will not only entail my neverending soul searching but also my failings, my embarrassing moments, my fears, and other less-than-perfect things. I believe the same case applies for many other hijab-wearing women. I’ve said this and I’ll say it again: I think it’s unfair that the multifaceted lives of varied women are reduced into a collection of pink-painted vignettes.

And who benefits from all this? A young male writer and a rating-seeking television station. They may argue that what they are doing are an effort to inspire more women to adopt the headscarf and modest clothings. But if they want to be fair to do this, they also should highlight the less heroic, less glamorous aspects of veilings: workplace discrimination, bad hijab days and the fact that, no, adopting the hijab does not solve all your life’s problems and make you live happily ever after.

Muslim women are much more than their scarved or non-scarved head. I wish the world would wake up to that notion one day. 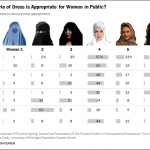 January 15, 2014
Am I Dressed Appropriately? Or Why That's None of Your Business
Next Post