Mothering in an Age of Gendered Islamophobia

Mothering in an Age of Gendered Islamophobia February 13, 2014 woodturtle

This is the second post in my series on the media stereotyping of Muslim women.

While some media argue that (identifiable) Muslim women are more likely to suffer Islamophobic attacks than men, I also recognize that Muslim men and non-Muslim men are also recipients of racial and anti-Muslim violence.

This post looks specifically at Gendered Islamophobia as targeted toward mothers and their families. 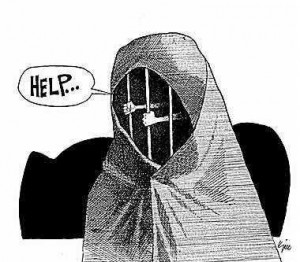 Before she was even old enough to speak, I heard many well-intentioned but offensive comments from complete strangers, asking if I would ever force the hijab onto my daughters. As if it’s a given assumption that Muslim mothers and families routinely oppress their daughters into adopting a style of religious dress.

When it is not a piece of cloth that oppresses women, but discrimination, exploitation, inequality, domestic violence, and religiously justified misogyny.

Issues that many people face, not just Muslim women alone.

But when demonized images of Muslim women and mothers are conflated with negative media stereotypes and politicized symbols associated with the veil, it further encourages a climate of Gendered Islamophobia: Where because women in headscarves are immediately identifiable as representing Islam, they may experience deliberate gender-based violence, harassment or prejudice.

In May 2013, civil rights groups and families protested in France, calling for the religious freedom of Muslim women and for their right to simply pick up their children from school. Mothers in headscarves now face new discrimination at schools who object to seeing headscarves in the playground before and after classes — claiming that the hijab’s “outward sign of religious practice goes against the French law of religious neutrality.”

This spring a Toronto jogger was charged after repeatedly assaulting a pregnant woman in hijab. And in the fall, a mother in hijab was harassed at a Quebec City mall — being told to take off her scarf and to change her religion. When her young son stepped forward in her defence, the offender allegedly spit in his face.

In France, a young woman tragically miscarried after two men attacked her, berated her with anti-Islamic slurs, tore off her hijab, cut her hair and repeatedly kicked her in the stomach — even after she told them of her pregnancy and begged them to stop.

In a similar attack in Sweden, a heavily pregnant Muslim woman had her headscarf torn off, and she suffered a concussion when her head was slammed against a car, while her assailant verbally abused her with racial slurs.

Following the assault, Swedish women and men posted pictures of themselves wearing headscarves on Twitter and Instagram with the translated hashtag #hijaboutcry — in an action of solidarity to protest injustice and violence against women.

Some media refer to these attacks and reports of assault as “burqa rage” or “veil attack” — when one becomes so angry, upset and offended by the sight of a Muslim woman’s head covering, that theyreact with violence and lash out at the woman wearing it. Sadly, even the terms “burqa rage” and “veil attack” do Muslim women a disservice by reducing the experience of violence to the physical headscarf.

As if it were only a piece of cloth left lying in the street. As if these attacks have no impact on how these women raise their children, experience motherhood, or relate to themselves, their faith and their community.

Mothering in an age of Gendered Islamophobia

This situation adds an extra layer to mothering beyond trying to process the gender stereotyping of children’s toys and combating the sexualization of childhood. Muslim children are growing up seeing images of women who may look like their mothers, friends, or relatives being used to create a culture of fear and anti-Muslim hatred.

Muslim mothers are being placed into complex situations where they have to communicate positive Muslim identity, while deflecting and protecting their children from internalizing negative portrayals.

Parenting to Muslim children includes providing them with a script on what to do if they’re called a terrorist at school. And Muslim children are being asked by their parents not to speak about guns, shootings or bombings — even if they’re only talking about a video game with their friends.

At the same time, parents have to explain that all Muslims are not complicit or guilty by association whenever there’s a horrific shooting or bombing — even if the Media suggests otherwise.

Mothers in the Unites States are asking school boards to provide sensitivity training to counteract targeted bullying against Muslim children. Muslim mother group blogs promote talking points and tips on how to discuss the events of 9/11 to Muslim children — helping them cope with a tragedy they never knew and helping them understand why people would be upset with them personally. As well as trying to explain the painful, complicated reasons when bad things happen to mom.

In the overwhelming media focus on simplistic and negative stereotypes, Muslim women and their successes — their diverse stories — are being overlooked. Even their problems and challenges are typecast as being normal. The focus generated by media stereotyping and gendered Islamophobia is explicitly on the clothes women wear and not on the sources of oppression. There is nothing constructive in a promotional campaign depicting a woman as a garbage bag.

And results in a massive amount of the female Muslim population being terribly underrepresented. 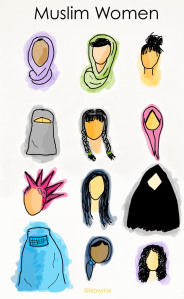 What’s missing in this media-driven discourse is that the “authentic Muslim woman” is so much more than a symbol.

She’s a single mother, childless, and happily unmarried. She’s queer, transgender, cisgendered, and hijabless. She supports her blended family, home-schools, boxes and coaches the local soccer team. She’s free to act, champions women’s rights, and lobbies for her children to have equal access. She’s an immigrant, a convert, a second generation Canadian. She’s a Member of Parliament, an author, an activist, a feminist. She gets her nails done, feels like she ate too many cookies, and goes to the gym. She prays and fasts for God, or might even be an atheist.

The “Muslim woman stereotype” silences this reality of diversity and affects not only how Muslim women see themselves and how they are seen by others, but also how Muslim children relate to their families and their religion.

Up Next: How Muslim women are creating online spaces challenging these stereotypes. 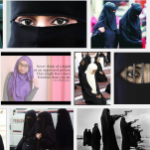