Over a series of posts I’ll be sharing some of my research looking at the various ways Muslim women and mothers are presented by media, how this effects women’s relationships to their families, religion and Selves, and how women are in turn, responding to these stereotypes online. Using authentic voices to create spaces where their work and empowerment are celebrated — helping counter the overwhelming negative construction of “the Muslim woman.”

She’s wrapped in black from head to toe — and at this angle, it looks like she can barely see through the veil covering her face as she holds tightly to her child.

Media love the image of the anonymous Muslim woman.

Through stock photography that overwhelmingly includes images of women in black niqab, media often homogenizes Muslim women — othering, objectifying, sexualizing, and promoting the stereotype that they are victims in need of saving or aren’t “modern” enough to accept western values.

A quick Internet image search of the terms “Muslim women” will return hundreds of examples of women shrouded in black, covered by face veils. Which is extremely problematic given that not only is the hijab worn differently throughout the world — with myriad styles, designs and colours — but many Muslim women don’t wear the headscarf, and a minority wear the face veil. 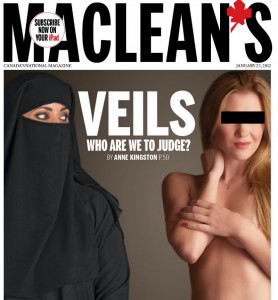 Regardless of lived experience, the Muslim woman is framed as submitting to oppression — her own voice silenced, her actions and agency restrained by misogyny and a patriarchal religion. The camera focuses specifically on the veil — fixated by what she is wearing and not on the woman herself. In some images, she is literally trapped behind the bars of her niqab.

Often, these images are taken from countries where the headscarf and face veil are worn as a cultural norm — but are applied uniformly whenever Islam, Muslims, or topics vaguely relating to Muslims are mentioned. They usually include women who aren’t remotely connected to the news story, or are actors modelling religious dress — constructing an image of the “authentic” Muslim woman.

These images dehumanize Muslim women. As passive, lifeless objects, Muslim women become nothing more than props and their inclusion adds little value to the subject matter. 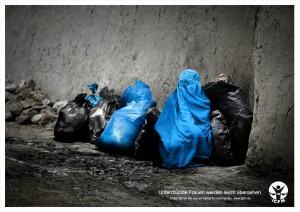 Take for example this promotional poster by a German NGO, which states, “Oppressed women are easily overlooked. Please support us in the fight for their rights.” Here the Afghani burqa becomes the symbol of oppression — objectifying and reducing women to garbage.

This is problematic not only because “universal oppression of women” is being represented by a very specific culture, but also because extremely empowered Afghan women do in fact, exist. 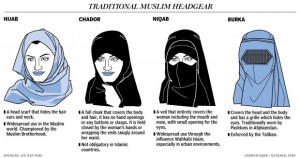 The National Post used this infographic to illustrate an article on Quebec allowing female prison guards to wear the hijab. Which for many, is a positive example celebrating religious accommodation, Muslim women’s empowerment and greater employment opportunities for women who cover.

Instead of focusing on the positive, or an actual Canadian female prison guard in hijab, the paper chose to illustrate a woman slowly disappearing under various forms of cultural headcoverings – suggesting the “creeping” threat of extremism whenever religious expression is allowed in public institutions.

Media representations have also radicalized the image of the Muslim mother. It’s commonplace to see pictures of mothers holding the dead corpses of martyrs and crying on the news, or stoically holding their sons’ pictures in honour of their sacrifice. The media coverage is sensational — celebrating whenever the stereotyped Muslim woman does anything remotely “normal.” 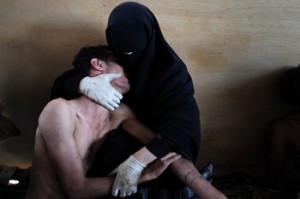 In 2011 the media was gripped by the award winning World Press photo of Fatima al-Qaws cradling her son after he was injured in an anti-government demonstration in Yemen. Writing for MMW, blogger Eren Cervantes-Altamirano noted that when first published, western media described Fatima as an anonymous woman in niqab, “concealed in black robes,” and “becoming a living image of ordinary people that helped create an important chapter in the history of the middle east.”

But when the Yemen Times interviewed her about the now popular image and the excitement it generated, Fatima initially laughed it off, saying that at first she thought people were referring to an interview she had done months earlier with the media network Al-Jazeera. All of her hard work during the revolution, her local status, her very name and identity, even the relationship she has with her son — were replaced by the media with the objectification of her “black robes.”

Overall, Muslim mothers tend to not have a very positive representation in the media

When it comes to “mother blame” and “bad mothering” some media representations distort the image of the Muslim mother even further — insinuating that the cause of Islamic terrorism is literally home grown within a mother’s womb. Muslim mothers become demonized as the creators of terror — receiving blame for the horrific actions of a few individuals. 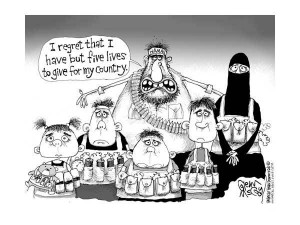 She’s held captive by politics. In this cartoon, she and her children are without agency — existing as living bombs for the father figure who says, “I regret that I have but five lives to give for my country.” 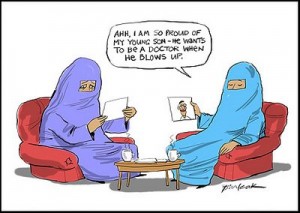 Or she’s a proud supporter of terrorism — as this cartoon from the Sydney Morning Herald suggests. Over coffee, one mother says to another, “I am so proud of my young son. He wants to be a doctor when he blows up.” 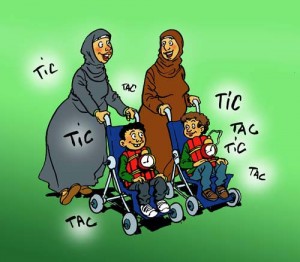 This cartoon titled “Islamic Time Bomb,” illustrates two cheerful women pushing strollers, speaking happily with each other while time bombs strapped to their equally happy sons countdown to detonation. The message of this anti-Muslim cartoon is painfully clear: Muslim mothers are raising and encouraging future terrorists, or worse, they are more than happy to kill themselves and their children to harm others.

And this horrific image is particularly chilling on several levels. 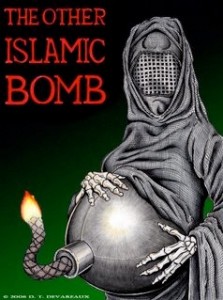 A mother’s skeletal hands grip her swollen, pregnant belly — depicted as a bomb with a lit fuse. This image was uploaded to the Facebook page, “Stop the Islamization of America,” an open group created by right-wing authors Pamela Geller and Robert Spencer, as a platform to share opinions on the growing threat of Islamic extremism they believe is slowly taking over America.

This picture was intended to illustrate the dangers of Muslim demographics and suggests that Muslims plan to take over America through a population explosion. But while demographics and population increases have frequently been characterized as “exploding” since the “population bomb” was coined in the 1960s, there is no mistake that this “other Islamic bomb” refers to terrorism.

The carrier of this population increase is Death, shrouded in a burqa. The image obviously intends to shock, suggesting that Muslim mothers will bring about the death of the western world through their explosively dangerous, terror-producing wombs.

As mentioned previously, many stereotypical images focus on the veil itself, and not what’s underneath. But here the mother figure openly lifts her black dress. The thrilling, forbidden sexualization of revealing her body is replaced with a hidden danger. The subtext being that the veil represents a security threat — not only hiding insidious, anti-western sentiments within the hearts of Muslim mothers, but that the veil itself is a symbol for religious extremism and terrorism.

Thus, Muslim women and mothers become the conduit by which others can exert their fear, prejudice and ignorance — becoming objectified and representing everything we need to fear from “the terrorists.”

February 13, 2014 Mothering in an Age of Gendered Islamophobia
Browse Our Archives
Follow Us!