Do Women have a Voice in the Qur’an? Review of “Recovering the Female Voice in Islamic Scripture.” 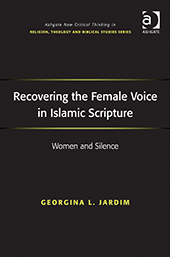 I started reading “Recovering the Female Voice in Islamic Scripture” by Georgina L. Jardim a few weeks ago. As I approached the end of the book, I was traveling and got to read the conclusion by the beaches of the Caribbean Sea. I write this as a way of placing myself into the reading of this book. My latest academic endeavours include intersectional feminist, Indigenous feminist and decolonial literature, which have influenced and transformed the ways in which now I read the texts of prominent Muslim feminists. Further, my own engagement with Latin American literature, theologies and experiences of faith, have changed how I see academic attempts to explain faith, womanhood and agency in the Western context.

Jardim’s book is the academic endeavour of a Christian woman, as she self-identifies in the introduction, into the voice of women vis-à-vis the shared stories of Jewish, Christian and Muslim scriptures. Her book is a very well researched and complex source. However, I will say that it is not particularly accessible. Having a background in Religious Studies helped me get through the text. Yet, I would say that one requires a deep knowledge of the Qur’an, as well as Arabic terminology. Further, previous engagement with the works of Amina Wadud, Asma Barlas, Barbara Freyer Stowasser and other scholars is a must. Similarly, a well-rounded knowledge of Western philosophy, linguistics and Social Science methodologies is recommended.

The book emerges in the context of feminist questions about women’s role and voice within the sacred scriptures of Judaism, Christianity and Islam. Thus, I see it as fulfilling a two-folded purpose. First, it is a book that seeks to find common ground for feminist interfaith exchange (p. 1-3). Next, it departs from previous feminist works studying the role of women in Islam to ask, are there women’s voices in the Qur’an? And if so, what are they saying?

Jardim’s work has long lasting implications in that it not only challenges mainstream understandings of Muslim women’s role in scripture, tradition and public spaces, but provides a critique of Muslim feminist scholarship. Jardim argues that no previous Muslim feminist work has truly highlighted women’s voice within the Qur’an and that attempts to look at women within the text have relied heavily in external sources, which often times is the very same critique that Muslim feminists provide about traditional hermeneutics (p. 66-68). On that note the author sees value in Amina Wadud’s work Qur’an and Woman, a book that she references quite often and that many of us know because of its popularity, but identifies relevant “contradictions” within Wadud’s methodology and her reliance in the very same sources and methodologies that mainstream male theologians use (p. 68).

The text offers nine chapters, which break down the process of finding the female voices in the scripture. Thus, Jardim takes the readers through an explanation of interfaith, Islamic and Qur’anic feminist understandings of female subjectivity (Chapter 1). Later, she provides an overview of female agency by showing how women have been “constructed” in the Islamic imagination through the images of women like Khadijah, Aisha and Fatima (Chapter 2). In the third chapter, she explores female presence in the Qur’an and provides an overview of the tensions that arise when discussing which women (many unnamed) should be considered to have a presence within the text. Next, Jardim offers an overview of how gender has been read in different contexts and relies on the works of Angelika Neuwirth to bridge historical and literary approaches to the Qur’an (Chapter 4). Chapter five engages in an in-depth linguistic analysis of Qur’anic signs, which according to the author is important because “The analysis of the language of sign in the Qur’an makes clear that gender is not only an item in the Qur’an’s grammar of concepts, but must also be considered for its role in developing the Qur’an’s grammar of concepts” (p.15).

Continuing on, chapter six, my favorite I must say, presents a linguistic analysis of the titles of the Qur’anic surahs. It is in this section that the author argues that the titles of each surah, which are largely ignored in mainstream modern Islamic scholarship, are in fact important. Likewise, she starts hinting at female presence within the text particularly through the titles of surah 58 “Al-Mujadilah” (The woman who disputes) and surah 60 “Al-Mumtahanah” (The woman who is tested).

Then, the following section focuses on female activity and women’s agency to question and engage with the revelation. Here she finds that the Qur’an is not only a “polemical text” in itself, because of the ethics it introduces, but also in its approach to enabling interaction between the interlocutors and the revelation (chapter 7). In chapter eight the author goes back to “Al-Mujadilah” and performs a comparative analysis of how the “disputing woman” referred to in the surah is viewed in the Qur’an versus the ahadith. Finally, in chapter nine it is this very figure that becomes a model for the exploration of female presence within the Qur’an. Jardim concludes that there is female presence in the Qur’an and that women’s voices travel through the text. She comments, “The Qur’an’s figure of the ‘woman who disputes’ showed how the divine word, or Logos, is personalized in sacred moments through women’s interlocution between God and the male agents of Islam, Judaism and Christianity” (p.217).

I find Jardim’s biggest strength to be her linguistic analysis of the text and her approach to the titles of the Qur’anic surahs. Those approaches definitely invite the rest of us to think about the importance of language and terminology when speaking of gender and agency. On the other hand, I find that the text relies heavily on the works of women based in the West (i.e. Wadud and Barlas), which could be mistaken for an idea that there is no ground-breaking feminist (or otherwise) work happening elsewhere. The same goes for her reliance on non-Muslim women’s work and the focus on Western approaches and methodologies (i.e. Neuwirth and Stowasser). Whereas I acknowledge that this is my own bias, I cannot help to wonder, why do women working within the framework of the Qur’an feel the need to speak of gender, agency and sexuality in Islam in Western terms? Would theories and approaches developed elsewhere facilitate the task? Would we discover new things about womanhood in the Qur’an? Would non-Western approaches, which, in my opinion, also come along with heavy patriarchal biases, highlight the female voice in the Qur’an in different ways? Thus, this is an invitation for us scholars, to think outside the box and the limits of the Western academia.

May 14, 2015 A Roundtable on Mona Eltahawy's Headscarves and Hymens
Browse Our Archives
Follow Us!

Stepping Up To Spiritual Activism
In the three very long months since my last article when I...
view all Muslim blogs
Copyright 2008-2020, Patheos. All rights reserved.